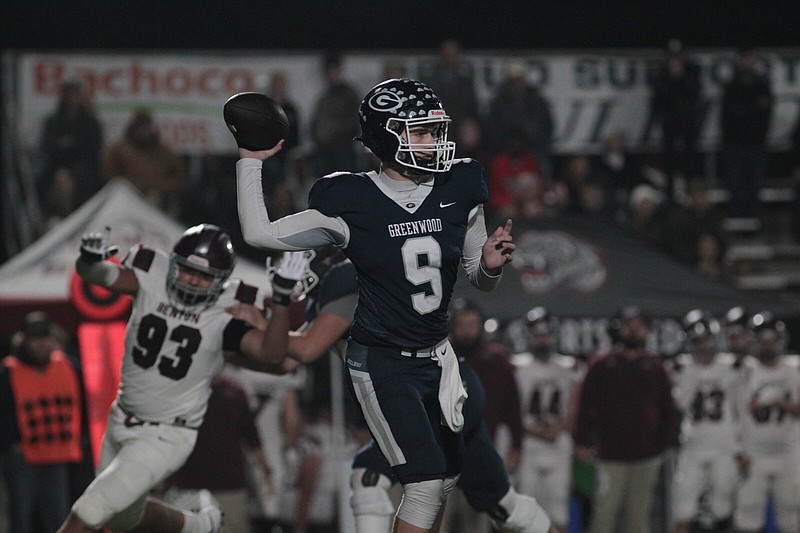 Greenwood quarterback Hunter Houston throws a pass Friday during the Bulldogs’ 31-24 victory over the Benton Panthers in the Class 6A semifinals in Greenwood. (Special to the NWA Democrat-Gazette/Shane Cossey)

GREENWOOD — It took a late drive and score to put Greenwood in another state championship game.

Hunter Houston hit L.J. Robbins on a 5-yard touchdown pass with 11 seconds left to lift the Bulldogs to a thrilling 31-24 win over Benton in the Class 6A semifinals Friday at Smith-Robinson Stadium.

The Bulldogs (10-2) will play Pulaski Academy (11-1) for the Class 6A championship at 6:30 p.m. on Dec. 3 at War Memorial Stadium in Little Rock. This will be Greenwood’s 16th state championship game appearance and the school will be playing for its 11th state title.

“Sometimes, I think people up here take it for granted [reaching the state finals],” Greenwood Coach Chris Young said. “They do not realize how hard those kids worked to get here and how good you must be over and over each week. I mean one bad night can end your season.”

In the game’s final six minutes, it was Greenwood playing the ball-control, field position game to set up its winning score.

“With [Benton’s Braylen Russell] running the ball, they can control the clock and limit you in how many possessions you get,” Young said. “They can have the ball at their 20, hand it to him and he can go 80 at any time.”

Greenwood then got a first down near midfield, but on fourth and four at its 45, Landon Nelms punted to the Benton 6.

The Greenwood defense forced Benton into a three-and-out, punting back to the Bulldogs to the Panthers 45 with 2:35 left.

Houston converted two fourth downs on the game winning drive — keeping for a yard on a quarterback sneak to the Benton 35 and then hitting Grant Karnes for 30 yards for a first-and-goal at the Benton 3 with 40 seconds left.

Houston lost 2 yards on a keeper on first down, then faked a handoff to Robins before hitting him in the flat for the game-winning score.

Young also had praise for his defense which made several critical stops to pick up the offense.

“Luckily, our defense stepped up tonight when our offense was inconsistent. The stand before halftime. They scored at the start of the second half, so that could have been a two-score swing.”

The Bulldog defense also stopped two Benton drives inside the Greenwood 2 – a fumble recovered by Strom Scherry in the end zone in the first quarter and a tackle at the 3 to end the half.

“We have the ball at the 1-yard line twice [and don’t score],” Benton Coach Brad Harris said. “We talked about kicking the field goal [just before half], but we felt we needed momentum there with a touchdown. As the final score turned out, we needed that touchdown there, not a field goal.”

The two teams combined for six turnovers — three interceptions by Greenwood and three lost fumbles by Benton. Houston’s first interceptions was on the first play from scrimmage — a 15-yard interception return for a touchdown by Patrick Shipp 10 seconds into the game for a 7-0 Benton lead.

“It was kind of a sloppy game from both teams. There were a lot of turnovers,” Young said. “I did not think we were that good on offense. We turned the ball over, had some dropped ball and we did not make some good throws. Part of that was Benton because they are good on defense.”

Russell finished with 234 yards on 39 carries with 2 touchdowns.

“We knew what to expect from them. We played them in the [6A] West for several years,” Harris said. “We knew what we had to do. We made some tremendous plays at times. We played our tails off tonight and I am proud of them.”