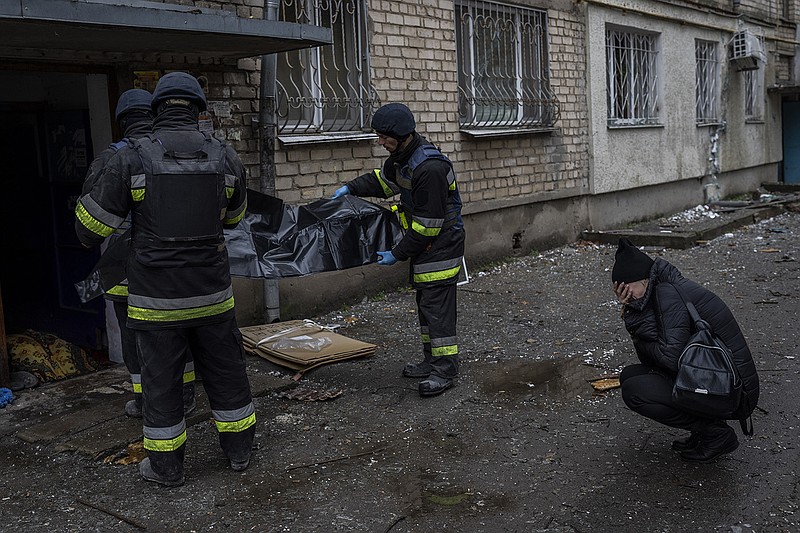 Lilia Kristenko, 38, cries Friday as responders collect the body of her mother, Natalia Kristenko, at her apartment in Kherson, Ukraine. The 62-year-old woman had gone for a walk with her husband Thursday evening after drinking tea when the building was struck in a Russian attack. Kristenko was killed instantly and her husband died hours later in the hospital. More photos at arkansasonline.com/ukrainemonth9/. (AP/Bernat Armangue)

Russian forces shelled the city and surrounding area 49 times Thursday and Friday, said Yaroslav Yanushevych, the head of the Kherson regional military administration. Thursday was one of the deadliest days since the Kremlin ordered its forces to retreat.

"Due to constant Russian shelling, we are evacuating hospital patients from Kherson," Yanushevych said. Pediatric patients were transferred to Mykolaiv, he said, while 100 patients from the regional psychiatric care facility were moved to Odesa.

Ukrainian President Volodymyr Zelenskyy said Thursday in his nightly address that Russia had begun shelling as "revenge" after Ukrainian troops reclaimed the city.

"Almost every hour, I receive reports of strikes" in the Kherson region, Zelenskyy said. "Such terror began immediately after the Russian army was forced to flee from the Kherson region. This is the revenge of those who lost."

All three nuclear power plants under Ukrainian control are back online and will soon be producing energy at normal capacity, the head of the national energy utility said Friday, two days after Russian missile strikes that forced utility crews to scramble to stabilize the country's crippled energy grid and raised further concerns about the nuclear perils of the war.

The Russian attacks Wednesday triggered emergency protections at the three plants and required a halt to production.

He added that utility crews are prepared to react to further Russian attacks but urged consumers to save electricity.

Several more civilians, including a 13-year-old boy, were killed in blasts this week.

Since Russia launched its full-scale invasion of Ukraine in late February, more than 6,557 civilians have died and about 10,000 others have been wounded, according to a report last week by the United Nations High Commissioner for Human Rights. The true toll is thought to be significantly higher.

March was the deadliest month of the war so far.

And over the past month, as Russia has assumed defensive positions in the face of Ukrainian advances in the south and northeast, Moscow has escalated its aerial bombardment of energy infrastructure targets in cities and towns across Ukraine.

"Together, we endured nine months of full-scale war, and Russia has not found a way to break us, and will not find one," Zelenskyy said.

Ukrainian officials have encouraged people in the Kherson area to leave for other parts of the country and have started running trains to and from the city to bring humanitarian relief. But Serhii Khlan, the deputy regional administrator in Kherson, said many of the 80,000 who remain do not want to leave their homes despite the hardships.

Kherson's population has dwindled to around 80,000 from its prewar level near 300,000. The government has said it will help people evacuate if they want to, but many say they have no place to go.

"They say: 'We were living 8½ months of occupation here, we survived,'" he said. "We'll survive, everything will get better. We will stay in our homes."

On Friday morning, electricity had been restored to meet about 70% of the country's needs, but rolling blackouts remained in place, Ukrenergo said in a statement posted on Telegram.

Ukraine typically relies on nuclear power for more than half of its electricity, an uncommonly high rate of dependence.

"In one to two days, nuclear power plants will reach their normal scheduled capacity, and we expect that it will be possible to transfer our consumers to a planned shutdown [regime] instead of emergency [blackouts]," Kudrytskyi said on Ukrainian TV.

"Priority was given to critical infrastructure facilities in all regions," the statement said, adding that efforts to reconnect household consumers were ongoing in subzero temperatures.

Kherson remains without heat and electricity after departing Russian soldiers blew up much of the region's critical infrastructure. Elsewhere, Ukrainian officials and energy workers continued their push to restore supplies after a nationwide barrage Wednesday left tens of millions without power and water.

The city government in Kyiv reported Friday morning that water had been fully restored but that half of the city's housing was still in emergency power outage mode. Without electricity, taps run dry, water purification becomes unreliable and wastewater is either not collected or has to be disposed of untreated.

Writing on Telegram, Mayor Vitali Klitschko added that authorities hoped to provide all consumers in Kyiv with electricity for a period of three hours Friday, following a preset schedule.

As of Friday morning in Kharkiv, all residents of Ukraine's second-largest city had their electricity supplies restored, but more than 100,000 in the outlying region continued to see interruptions, the regional governor said.

In the south, authorities in the city of Mykolayiv said that running water was set to start flowing again after supplies were cut off Thursday by Russian strikes.

For months, attacks in and around the Russian-controlled Zaporizhzhia nuclear plant have left engineers racing from one crisis to the next as it has repeatedly been disconnected from the national energy grid. External power was restored Thursday at the plant, a day after it was lost, according to the International Atomic Energy Agency, which has had inspectors at the facility since early September.

That plant, Europe's largest, has been offline since September but still needs electricity to keep cooling equipment running and ward off a nuclear meltdown.

"The complete and simultaneous loss of off-site power for Ukraine's nuclear power plants shows that the situation for nuclear safety and security in the country is become increasingly precarious, challenging and potentially dangerous," Rafael Grossi, the U.N. agency's director-general, said Thursday. "This would have been completely unimaginable before this tragic war. It is extremely concerning."

The agency has started providing assistance at Ukraine's other nuclear power plants after it was requested by the government, Grossi said.

"We must do everything to prevent a nuclear accident at any of these facilities, which would only add to the terrible suffering we are already witnessing in Ukraine," he said.

Snow and freezing rain worsened the plight of millions of Ukrainians who were without power Thursday evening.

"Energy workers, utility workers, business -- everyone is doing their part to give light again," Zelenskyy said in his nightly address. "This is truly a nationwide task -- Ukraine is working as unitedly as possible in this."

European officials are scrambling to help Ukraine stay warm and keep functioning through the bitter winter months, pledging Friday to send more support that will mitigate the Russian military's efforts to turn off the heat and lights.

She said Russia is "weaponizing" winter and plunging Ukraine's civilian population into hardship.

British Foreign Secretary James Cleverly, arriving Friday on a visit to Kyiv, said a promised air-defense package, which Britain valued at $60 million, would help Ukraine defend itself against Russia's bombardments.

"Words are not enough. Words won't keep the lights on this winter. Words won't defend against Russian missiles," Cleverly said in a tweet about the military aid.

The package also includes 24 ambulances and 11 other emergency vehicles, some of them armored.

"As winter sets in, Russia is continuing to try and break Ukrainian resolve through its brutal attacks on civilians, hospitals and energy infrastructure," Cleverly said.

Russian officials have claimed they are hitting legitimate targets. But the U.N. High Commissioner for Human Rights expressed his shock Friday at the depth of civilian suffering caused by the bombing, amid broader allegations of abuses.

"Millions are being plunged into extreme hardship and appalling conditions of life by these strikes," Volker Turk said in a statement Friday. "Taken as a whole, this raises serious problems under international humanitarian law, which requires a concrete and direct military advantage for each object attacked."

The U.N. humanitarian office also chimed in with its concerns.

"Ukraine is turning increasingly cold without power, without steady water supply and without heating," Jens Laerke, a spokesman for the office, said Friday.

He said the global body and its partners were sending hundreds of generators to Ukraine to help the government there in its efforts to keep people warm and maintain essential services, such as health care. The World Health Organization said it is sending generators to hospitals.

Cleverly's visit came a day after European officials launched a scheme called "Generators of Hope," which calls on more than 200 cities across the continent to donate power generators and electricity transformers.

The generators are intended to help provide power to hospitals, schools and water pumping stations, among other infrastructure.

Generators may provide only a tiny amount of the energy that Ukraine will need during the cold and dark winter months. But the comfort and relief they provide is already evident, as winter begins in earnest and power outages occur regularly.

NATO is determined to help Ukraine defend itself against Russia for "as long as it takes" and will help the war-wracked country transform its armed forces into a modern army up to Western standards, the alliance's Secretary-General Jens Stoltenberg vowed Friday.

Speaking to reporters ahead of a meeting of NATO foreign ministers in Romania next week, Stoltenberg urged countries that want to, either individually or in groups, keep providing air defense systems and other weapons to Ukraine. NATO as an organization does not supply weapons.

"NATO will continue to stand with Ukraine for as long as it takes. We will not back down," the former Norwegian prime minister said. "Allies are providing unprecedented military support, and I expect foreign ministers will also agree to step up non-lethal support."

Stoltenberg said members of the 30-nation security organization have been delivering fuel, generators, medical supplies, winter equipment and drone jamming devices, but that more will be needed as winter closes in, particularly as Russia attacks Ukraine's energy infrastructure.

"At our meeting in Bucharest, I will call for more," he said. "Over the longer term we will help Ukraine transition from Soviet-era equipment to modern NATO standards, doctrine and training."

Stoltenberg said Ukrainian Foreign Minister Dmytro Kuleba would join the ministers to discuss his country's most pressing needs but also what kind of long-term support that NATO can provide. NATO's top civilian official said the support will help Ukraine move toward joining the alliance one day.

The meeting set Monday and Tuesday in Bucharest is being held almost 15 years after NATO promised that Ukraine and Georgia would one day become members of the organization, a pledge that deeply angered Russia.

Also attending the meeting will be the foreign ministers of Bosnia, Georgia and Moldova -- three partners NATO says are coming under increasing Russian pressure. Stoltenberg said the meeting would see NATO "take further steps to help them protect their independence and strengthen their ability to defend themselves."

Since President Vladimir Putin ordered the invasion 10 months ago, NATO has bolstered the defenses of allies neighboring Ukraine and Russia but has carefully sought to avoid being dragged into a wider war with a major nuclear power. But Stoltenberg put no pressure on Ukraine to enter peace talks with Russia.

NATO and European diplomats have said Putin does not appear willing to come to the table.

"Most wars end with negotiations," he said. "But what happens at the negotiating table depends on what happens on the battlefield. Therefore, the best way to increase the chances for a peaceful solution is to support Ukraine."

Information for this article was contributed by Marc Santora, Ivan Nechepurenko, Victoria Kim and Marc Santora of The New York Times and by John Leicester and Lorne Cook of The Associated Press.