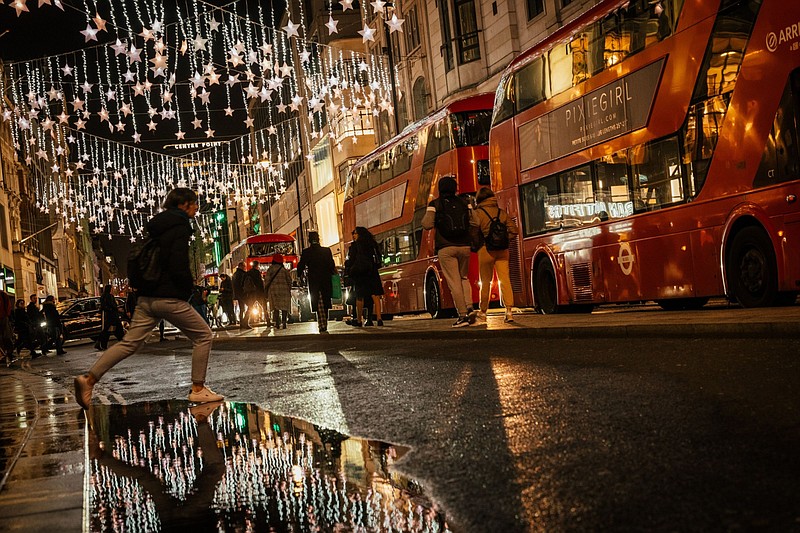 A pedestrian jumps over a puddle under illuminated Christmas lights along Oxford Street in London on Nov. 23. MUST CREDIT: Bloomberg photo by Jose Sarmento Matos.

Office workers in London have been looking forward to their first Christmas parties with colleagues for three years -- but now many are at risk of being canceled.

While covid restrictions played the Grinch in 2020 and 2021, this year a wave of strikes is threatening to wreck the festive season. Rail staff have announced two clusters of industrial action before and after the Christmas-New Year period, alongside walkouts by postal workers, nurses, bus drivers and thousands of other people refusing to accept pay offers while inflation stands above 11%.

"That was the one week everyone needed," said pub chain boss Sam Pearman, referring to four days of train strikes scheduled for mid-December. His pubs across upmarket areas of London such as Belgravia and Mayfair "will definitely see cancellations."

Pearman's pubs, run under the Cubitt House brand, started receiving phone calls from worried customers as soon as the latest strike dates were announced earlier this week. British bars and restaurants are already fearing the worst, with UKHospitality, the industry body, estimating $1.8 billion in lost sales and subsequent knock-on impacts from the train strikes.

"The loss of takings will be devastating," said UKHospitality's Chief Executive Officer Kate Nicholls, adding that some bars and restaurants make a third of their annual profit in the five weeks around Christmas.

The sector, along with retail, has been squeezed by the UK's high level of inflation, low consumer confidence, the start of a likely recession and an extremely tight labor market. Fewer people are now expected to travel into town and city centers to enjoy a day out and do their Christmas shopping, according to the British Retail Consortium.

Neither is online retail immune from the strikes, some of which have been going on for months. A long-running dispute between Royal Mail, a part of International Distributions Services, has led to postal workers targeting Black Friday as well as a stretch of days ahead of Christmas when many people expect presents to arrive.

The prospect of widespread travel chaos and public discontent prompted Transport Secretary Mark Harper to meet a senior union boss Thursday. While Mick Lynch, general secretary of the National Union of Rail, Maritime and Transport Workers, described the meeting as "positive," he is still holding out for a better deal with the UK's train companies.

The RMT's latest plans include a ban on working overtime for more than two weeks over Christmas, a threat that will almost certainly lead to further train cancellations and in some cases disrupt passengers more than scheduled strikes.

"It is shameful that the RMT continues to consider strikes as a legitimate weapon wielded with such cynical timing," said Richard Burge, chief executive of the London Chamber of Commerce and Industry. Still, Burge also blamed the government and train companies for failing to find a resolution.

Buses across London will also be affected throughout December with workers at Abellio and Metroline coordinating action through the Unite union.

Transport will face further disruption from a protest by civil servants, who are set to announce strike dates. Passport and border checks could be affected.

Information for this article was contributed by Sabah Meddings of Bloomberg News.