Troy can take division title with win over ASU 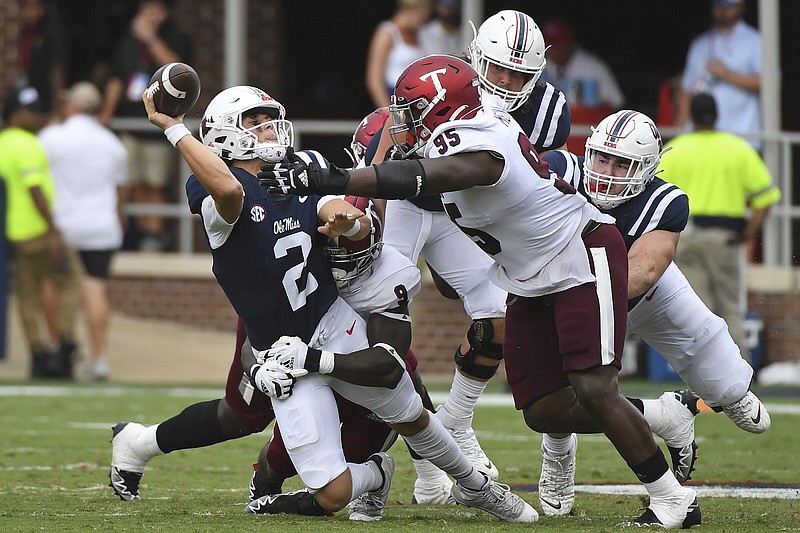 The scenario for Troy today is straightforward: Win and the Trojans will be into the Sun Belt Conference Championship Game as outright West Division champions.

A time when the shoe could have been on the other foot seems far off, especially with Arkansas State about to close the book on a third straight losing season.

But the Red Wolves need only look back four years to a time when they were playing for a conference title game bid on the regular season's final weekend.

For now, ASU will have to settle for playing the role of spoiler when Troy visits Centennial Bank Stadium in Jonesboro this afternoon. The Trojans enter the weekend with one of the league's most dominant defenses, ranking second in the Sun Belt in scoring defense, sacks and passing defense, led by the newly-crowned all-time FBS career tackles leader Carlton Martial.

"If there's ever a football program that exemplifies what's going on in the Sun Belt, it's Troy," Red Wolves Coach Butch Jones said earlier this week. "Coach [Jon] Sumrall has done a remarkable job in terms of creating a mentality [and] a style of play. That's the reason why they're coming in here fighting to win a championship."

On top of Martial, defensive linemen T.J. Jackson and Richard Jibunor are among the Sun Belt's top 10 in sacks and 10 of the Trojans' 11 defensive starters are juniors or seniors.

While Troy has reestablished itself as a defensive presence in Sumrall's first season -- the 40-year-old first-time head coach spent the past three seasons at Kentucky -- the Trojans can pop off offensively at any time.

Wide receiver Tez Johnson was a third-team All-Sun Belt honoree a year ago as a freshman and Jones described him as dynamic a wide receiver as ASU has faced this season.

Troy was long a force in the Sun Belt, only to tail off briefly when former coach Neal Brown departed for West Virginia. Chip Lindsey then didn't even make it through three full seasons, failing to ever reach bowl eligibility.

Although Sumrall's inaugural team won't necessarily be fighting for the Group of 5's spot in the New Year's Six bowl games, the Trojans may head into December on a nine-game winning streak. Troy's only losses came in the first three weeks -- first at Ole Miss, then at Appalachian State.

"It's a proud program with a lot of history and tradition -- that's what attracted me to come back to Troy," Sumrall said during his weekly news conference. "I'm very grateful we're in the situation we're in where we control our own destiny. ... I have no doubt we'll respect the game, the opponent and the preparation it takes to play the game the right way."