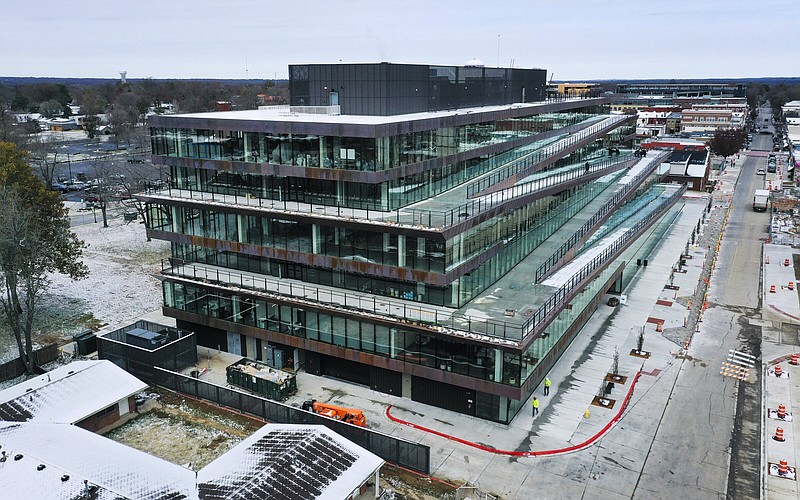 Two floors of the Ledger, a new six-story office and work space in Bentonville, are set to open this week. (NWA Democrat-Gazette/Charlie Kaijo)

BENTONVILLE -- The newest office building downtown is six-stories tall, bikeable, filled with art and offers a mix of traditional and fluid leasing options, and it's set to open this week.

The Ledger is a 230,000 square foot hybrid workspace with some of its areas bookable for a quick one-time meeting; a week of remote work; a month of head-down collaborating; or for even simply longer-term, dedicated office space. The Class A office building at 240 S. Main St. will provide everything from a desk or private work booth, to easily configured classrooms, boardrooms kitchens, and even dedicated event space. The building's ground floor is open to the public.

The first and second floors are scheduled to open this week. The sixth floor will open in 2023, the fourth floor in 2024 and the fifth floor is currently uncommitted with a variety of uses under consideration.

The property is filled with 260 works of art in many mediums. Zigzagging ramps on the outside of the Ledger allow biking along exterior's shared spaces and patios, floor by floor, all the way up to the building's roof. The Ledger also serves as a spot for retail, hosting Mertins Eye & Optical, Specialized Bike Center and is the temporary home for the Walmart Museum Heritage Lab.

Its interior and exterior are meant to reflect the Bentonville community as a place to work, play and enjoy life.

"We want to give you just a little nibble of Bentonville," Mary Best, the Ledgers' director of operations and community, said during a recent tour.

Bentonville is known as an art center, home of Crystal Bridges Museum of American Art and a companion art space called the Momentary. It also dubs itself as the Mountain Biking Capital of the World. It's downtown is ground zero for the city's focus on the arts and outdoors.

Debbie Griffin, director of administration for the city of Bentonville said the Ledger was the first of its kind in the city because of its unique fully bikeable concept. She said the Ledger -- and the Peloton building which followed -- each have built nearby parking structures that will help alleviate congestion.

She said city planners and the project's developers worked closely to make sure the structure meshed well with the existing downtown and its plans for future development.

The Ledger building isn't the only big project downtown. The 175,000 square foot, five-story, Peloton office building is situated at 215. N.W. A St. and still under construction, as is the new Walmart home office campus adjacent to the downtown as well.

The Ledger was designed by Michel Rojkind, Callaghan Horiuchi, and Marlon Blackwell Architects of Fayetteville. Josh Kyles of Bentonville is the project's developer and the property is self managed.

According to the city building permit, the Ledger is valued at $51.7 million and the associated parking garage is valued at $20.1 million.

The most recent Skyline Report by the University of Arkansas' Center for Business and Economic Research, shows commercial real estate in Benton and Washington counties was in high demand in the first half of this year resulting in vacancy rate drop to 5.8% from 8.9% in the first half of 2021. That's with 521,750 square feet commercial space available for lease coming on the market during the period. In the office sector, vacancy fell to 9.1% from the previous rate of 11.2%.

Jeff Cooperstein, senior research associate who works on the UA's Skyline Report said upscale office space is in high demand in downtown Bentonville, referring to the term "flight to quality" where tenants show a tendency to move into more expensive and lavish offices when those options are available.

He notes in Bentonville and its vicinity, luxury offices were something people avoided in the past but it's become an in-demand option in recent years. He said more amenity driven and lavish properties are becoming more prevalent in the region as Walmart, Tyson Foods, J.B. Hunt Transport Services, and their many vendors, work to attract and keep talent from around the globe.

One of those lures is a bike friendly atmosphere and bicycles are indeed a key element at the Ledger. In addition to the ramps, bike racks abound and there's a dedicated interior storage room for bikes -- more like a lounge than a storage room -- including lockers for patrons, private changing rooms and there are showers available on site.

Art is literally built into the Ledger with mosaics of local insects carrying jewels that make their way up the three-quarters of a mile of bike ramps to the top floor where the jewels spell out "Now is Better." The interactive exhibit by Austrian graphic designer Stefan Sagmeister features 13 types on insects that call the Ozarks home and is made up of 95 unique mosaics embossed within the concrete.

"Look at all the work they're doing," Best said of the insects. "Building is the message." 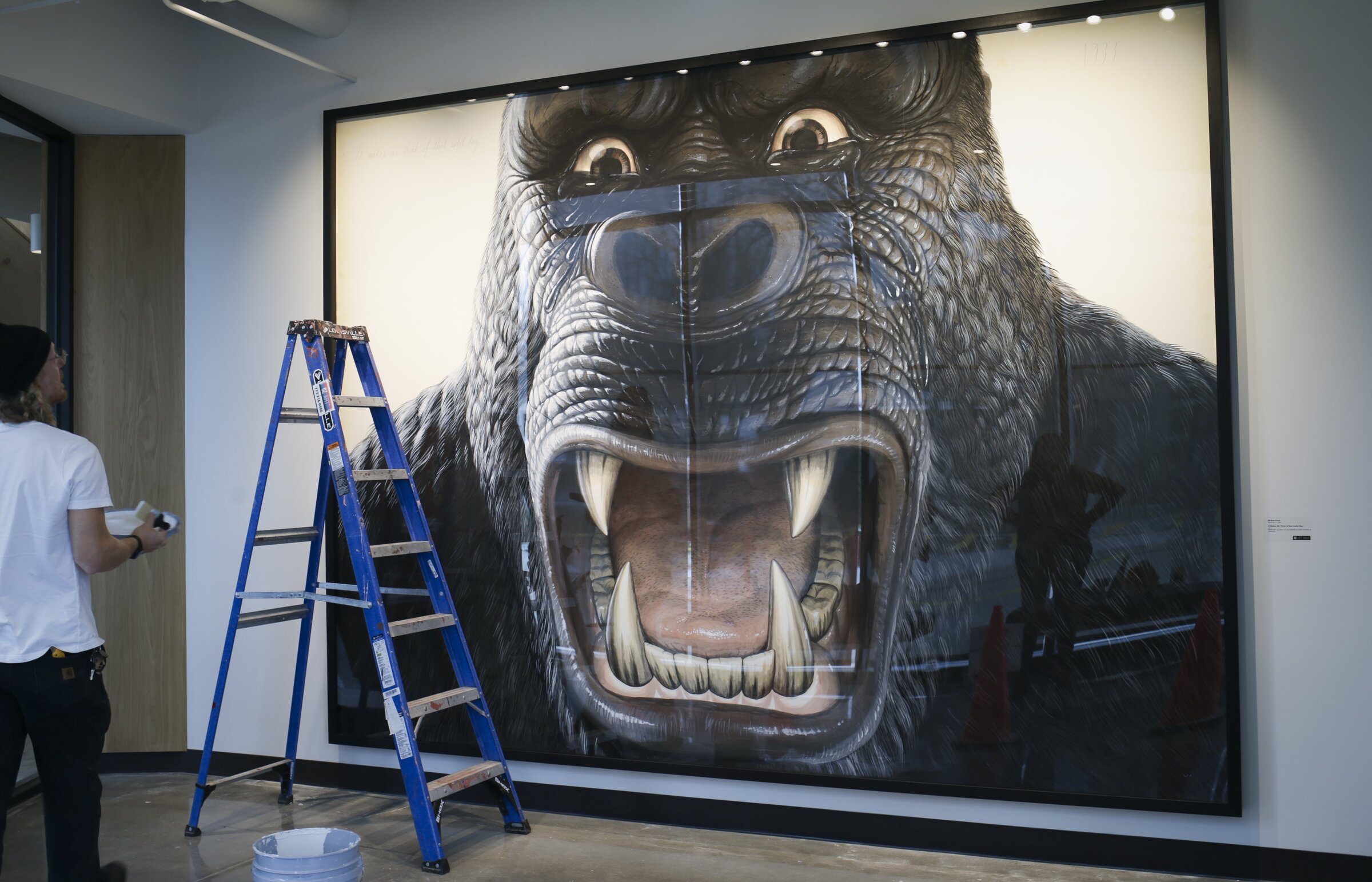 Art Handler Bob Jones looks at Walton Ford’s painting “It Makes Me Think of That Awful Day” displayed at The Ledger in Bentonville. (NWA Democrat-Gazette/Charlie Kaijo) 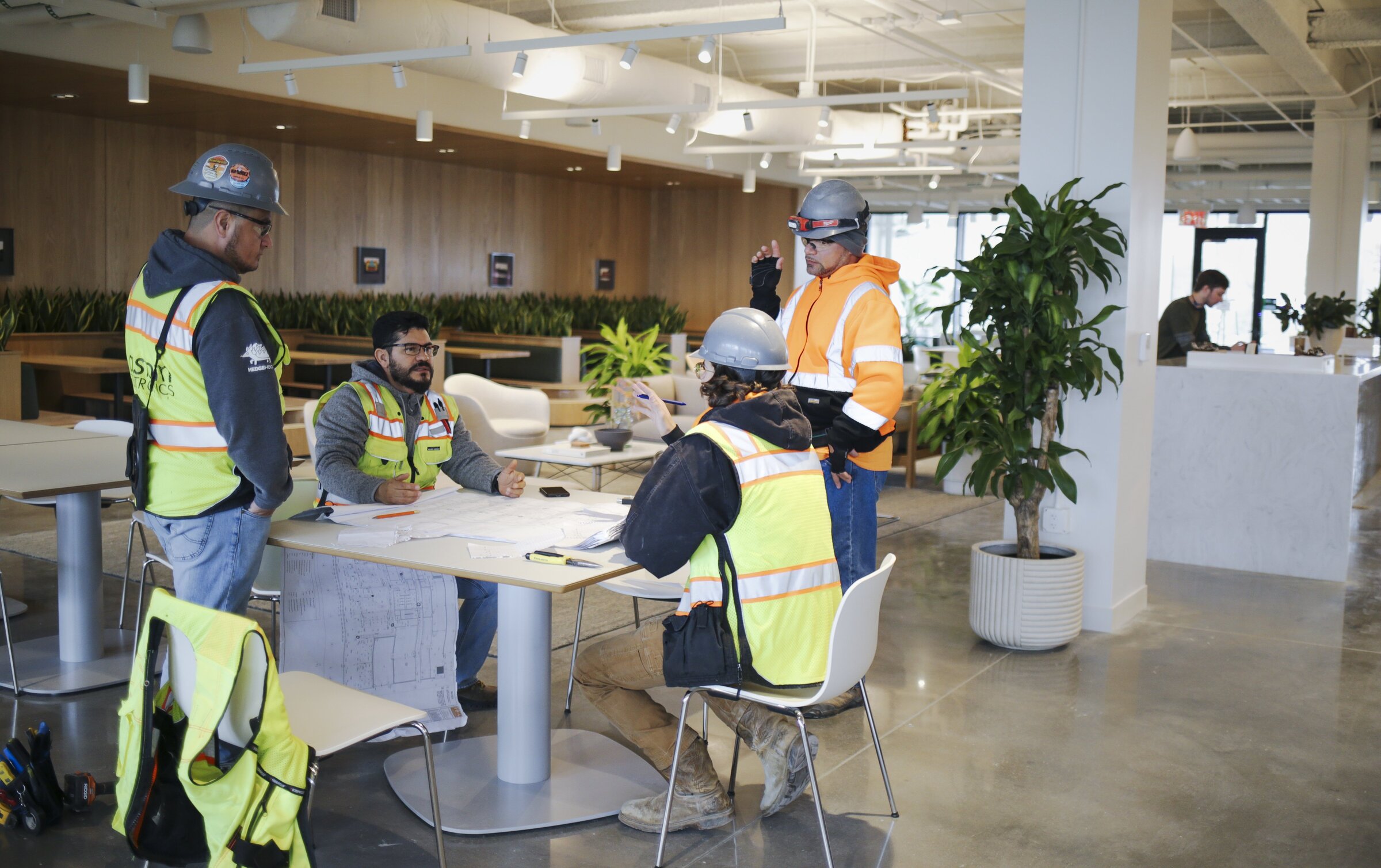 Construction workers meet inside the Ledger in Bentonville. Work on the six-story office and work space is nearing completion. (NWA Democrat-Gazette/Charlie Kaijo)