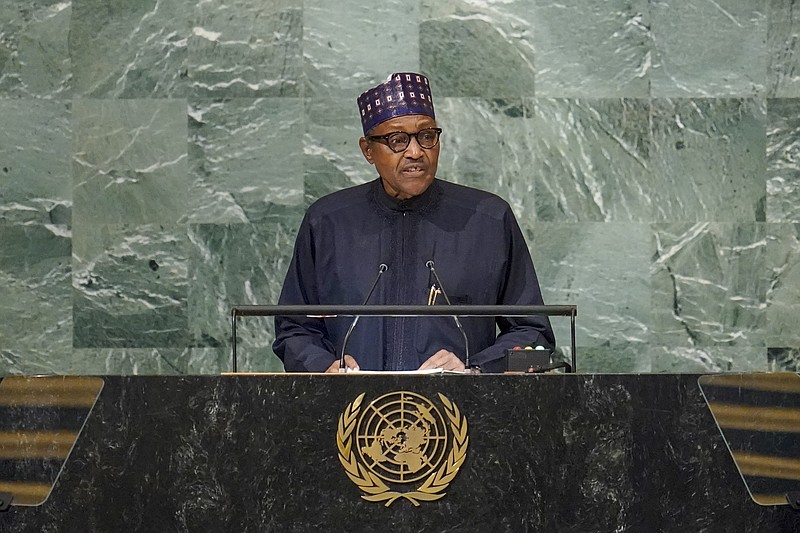 FILE - President of Nigeria Muhammadu Buhari addresses the 77th session of the United Nations General Assembly, Wednesday, Sept. 21, 2022 at U.N. headquarters. Nigeria has begun drilling oil and natural gas in the country’s northern region, anticipating a boost to the nation’s finances even as the new energy supplies face the threat from theft and extremist activity. President Muhammadu Buhari flagged off the drilling within Kolmani oil field on Tuesday, Nov. 22, 2022. (AP Photo/Mary Altaffer, File)

ABUJA, Nigeria -- Nigeria recently began drilling oil and natural gas in the country's northern region, anticipating a boost to the nation's finances even as the new energy supplies face threats from theft and extremist activity.

President Muhammadu Buhari flagged off the drilling within Kolmani oil field in northeast Gombe and Bauchi states, making it the first area where oil is being drilled outside the southern Niger Delta region. It has a reserve of up to 1 billion barrels of crude.

The drilling began nearly three years after Nigeria announced the discovery of oil in commercial volume in the region, which is embroiled in a decade-long war against Islamic extremists. Analysts have raised questions about security measures to protect energy facilities there, while there are environmental concerns about tapping into more climate-changing fossil fuels.

Crude oil has been critical in expanding infrastructure in the West African nation, accounting for 41% of total federal government revenue in 2021 and $10.1 billion in earnings. However, oil theft has had a huge impact on the country's finances and economy, which is Africa's largest.

Officials project billions of dollars in earnings from the new oil project, which is being developed by the state-run Nigerian National Petroleum Company Ltd. in partnership with Sterling Global Oil and a conglomerate owned by Nigeria's northern states called the New Nigeria Development Commission.

"We are pleased with the discovery of over 1 billion barrels of oil reserve and 500 billion cubic feet of gas within the Kolmani area, and the huge potentials for more deposits as we intensify exploration efforts," Buhari said of the project, adding that it has attracted a $3 billion investment.

"The project promises many benefits and these include energy security, financial security, food security as well as [the] overall socioeconomic development of our country," the president said.

The start of the drilling "marks yet another significant milestone in our collective quest as a nation to ensure energy security and access" for Nigeria's citizens, said the country's state petroleum minister, Timipre Sylva.

He anticipated more collaborations between the state oil firm and partners as it searches for oil in commercial quantity in other basins.

Officials said the Kolmani field would feature an oil refinery with a capacity of 120,000 barrels per day, a gas processing site of 500 million cubic feet per day and a power plant.