Gift-givers can’t go wrong by selecting books published by the University of Arkansas Press, which specializes in poetry, fiction, and the Middle East. by Rex Nelson | November 27, 2022 at 1:52 a.m. 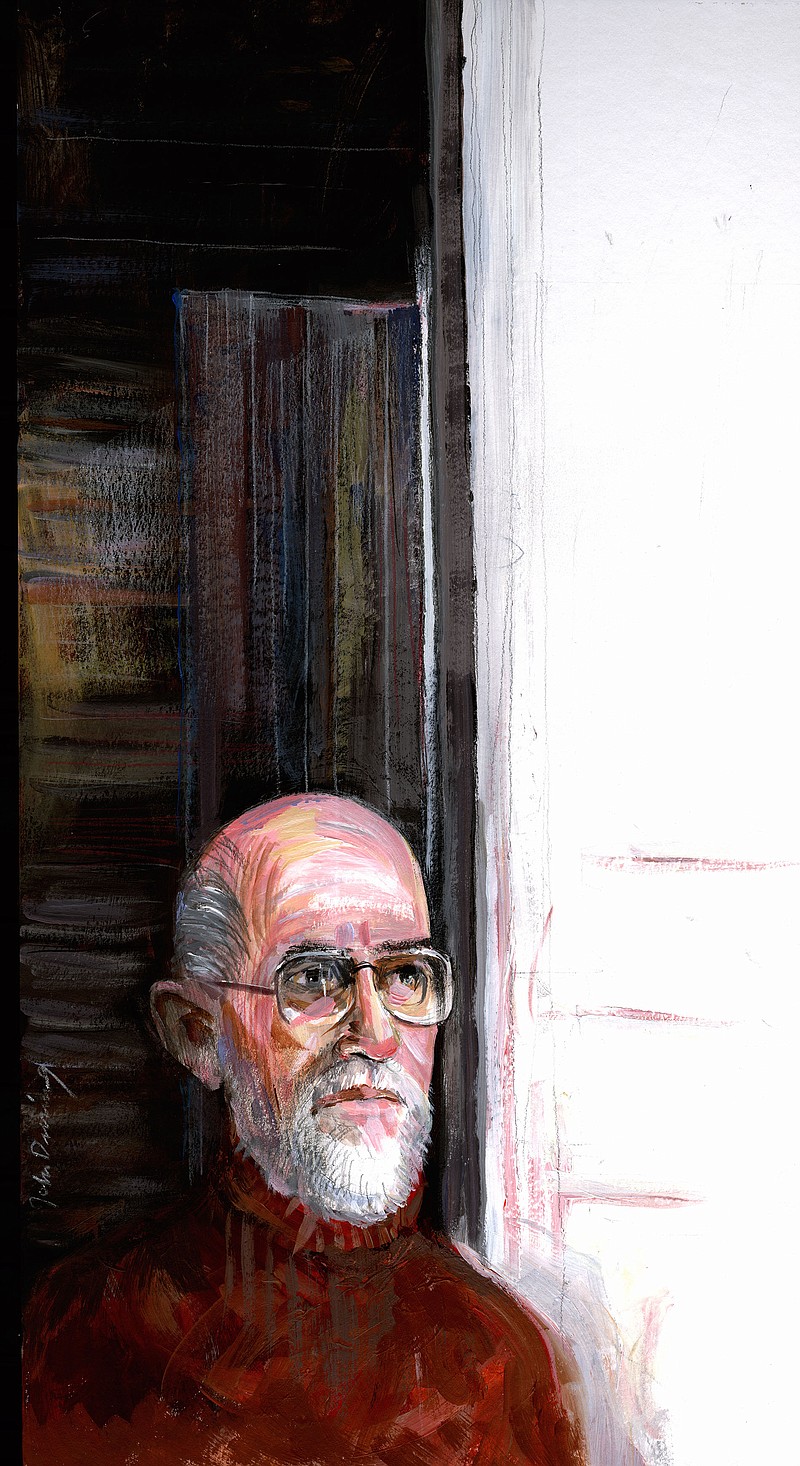 Miller Williams, one of the leading American poets of the 20th century, was co-founder (along with Willard Gatewood) of the University of Arkansas Press. (Arkansas Democrat-Gazette illustration by John Deering)

Miller Williams and Willard Gatewood had a plan in 1980. They decided the University of Arkansas needed an additional outlet for scholars to have their work published. They also believed there was a dearth of opportunities for Arkansas writers to get published, not to mention a lack of focus on the state's history and culture.

In December 1980, the University of Arkansas Press opened inside the renovated McIlroy House on the edge of the Fayetteville campus.

"A stylized depiction of this house became the UA Press logo," Brent Riffel wrote for the Central Arkansas Library System's Encyclopedia of Arkansas. "The press initially lacked the staff and funding to produce its own works. Williams worked out an arrangement with his friend William King, head of the University of Missouri Press, by which Missouri would serve as the editing and production house."

The UA Press didn't begin to function independently until 1983. Its first title, released in June 1981, was "The Governors of Arkansas: Essays in Political Biography," edited by UA historian Timothy Donovan.

Today, as I look through the 40-page 2022 catalog, I see numerous books I want to order for myself and other titles I want to order as Christmas gifts. Based on the variety and quality, one would never guess that the press has had a tumultuous history. It has truly been the "little university press that could."

There was the November 1983 fire at McIlroy House, which forced the staff to move out for almost a year. There was the September 1987 fire that damaged a warehouse and destroyed a large number of books. There was UA Chancellor John White's effort in the late 1990s to shut down the publishing house.

Arkansas and their determination to see UA Press succeed. Williams and Gatewood rise to the top of that list.

Williams, one of the leading American poets in the 20th century, served 33 years as a UA professor of English, foreign languages and comparative literature. Aspiring writers from across the country came to Fayetteville to be part of the creative writing program he led. Williams was author, editor or translator of more than 30 volumes of poetry, fiction and literary criticism.

Williams was born in April 1930 at Hoxie. As the son of a Methodist minister, he moved often as a boy. He graduated from high school in Fort Smith in 1947 and entered Hendrix College at Conway as a freshman, transferred across town to what's now the University of Central Arkansas, then transferred again to what's now Arkansas State University at Jonesboro. Williams published his first collection of poems, "Et Cetera," in 1952.

The poet received a bachelor's degree in biology in 1951 at Jonesboro, and two years later earned a master's degree in zoology at UA. He taught biology for the next decade. While teaching at Millsaps College in Jackson, Miss., Williams briefly studied at the University of Mississippi's medical school.

"In 1962, with writer Flannery O'Connor's help, he got a job in Louisiana State University's English department," his friend Gatewood later wrote. "Four years later, Williams joined the faculty of Loyola University in New Orleans, where he founded and edited 'The New Orleans Review.' In 1970, he returned to UA as a member of the English department and the graduate program in creative writing.

"The honors he received beginning in the 1950s attested to his growing stature in the literary world. Among these were the Henry Bellman Award in 1957, Breadloaf Writers Conference Fellowship in Poetry in 1961, Harvard University's Amy Lowell Traveling Fellowship in Poetry in 1963-64, New York Arts Fund Award in 1970, Fulbright Professorship at National University of Mexico in 1970, Prix de Rome for Literature in 1976 and Charity Randall Citation for Contribution to Poetry as a Spoken Art in 1993."

Williams added the John William Corrington Award for Literary Excellence in 1994 and the National Arts Award in 1997.

"At the State Department's invitation, Williams delivered lectures and readings on tours through several continents while mentoring UA students," Gatewood wrote. "President Bill Clinton selected him to read his poem 'Of History and Hope' at the 1997 presidential inauguration. Williams described himself as a product of the rural small-town environment of the South. Also important in shaping his poetry was his long engagement in science.

"Lauded for a diverse imagination and his use of irony, subtlety and ambiguity, Williams cherished a journalist's description of him as 'the Hank Williams of American poetry.' Miller Williams received the Porter Prize's Lifetime Achievement Award in 2009. Each year the UA Press awards the Miller Williams Poetry Prize."

Williams died Jan. 1, 2015, at Fayetteville. Despite his fame as a poet, his daughter Lucinda became even more famous as a songwriter and recording artist. She has won multiple Grammy Awards. In 2002, Time magazine called her "America's best songwriter."

"As a child, she met many of her father's writer friends, including Eudora Welty and Flannery O'Connor, who famously allowed the 5-year-old Lucinda to chase her peacocks," the Arkansas Democrat-Gazette's Philip Martin wrote. "By the time she was 12, she was writing her own songs on guitar and performing for her parents' guests. ... After a brief stint at the UA, she began the career of an itinerant musician, playing in bars and coffee houses in Austin, Nashville, Houston and Greenwich Village."

While Miller Williams was growing up in small towns across Arkansas, Gatewood was being raised on a tobacco farm in North Carolina. Born in February 1931, Gatewood received his bachelor's degree, master's degree and doctorate from Duke University. He began his college teaching career at East Tennesssee State University in 1957. Gatewood also taught at East Carolina University, North Carolina Wesleyan College and the University of Georgia.

Gatewood came to Arkansas in 1970 as the first Alumni Distinguished Professor of History, a chair endowed by the university's alumni association. He occupied the chair until his retirement in 1998. He was UA chancellor in 1984-85, taught hundreds of students, and directed 25 doctoral dissertations. Some of those students went on to become college history professors.

"During his career at UA, Gatewood won most of the major awards the university granted to professors, including the University Distinguished Research Award in 1980 and the Chancellor's Medal for Distinguished Service in 1994," wrote fellow Arkansas historian Tom DeBlack. "He was the author, co-author or editor of 14 books and more than 75 articles in scholarly journals. Several of his books were pioneering works in African-American history."

Gatewood's "Aristocrats of Color: The Black Elite, 1880-1920," was published by UA Press in 1990 and nominated for the National Book Award. Gatewood was president of the Southern Historical Association in 1986-87.

In 2002, UA Press published "The Southern Elite and Social Change: Essays in Honor of Willard B. Gatewood Jr." The essays were written by former students and colleagues.

The introduction of the book noted: "There will be, no doubt, other great teachers and scholars. But all who contributed to this volume are certain that Dr. Willard B. Gatewood Jr. is a profound teacher and scholar. We owe our abiding enthusiasm and respect for history to him."

Gilchrist, a Vicksburg, Miss., native, graduated from Vanderbilt University and then earned another degree from Millsaps, where she studied under Welty. After postgraduate work in creative writing at UA, Gilchrist was a contributing editor of the Vieux Carre Courier in New Orleans from 1976-79 and had her first book of poetry published.

Gilchrist chose to have "The Land of Dreamy Dreams" published by UA Press rather than a commercial publisher. Its success led to a contract with Little, Brown & Co. Her collection of short stories titled "Victory Over Japan" won the 1984 National Book Award for Fiction.

With the success of Gilchrist's 1981 collection of short stories, UA Press was able to hire its first editor, Stephanie Brown, in July 1982. Williams still handled the majority of manuscript acquisitions. In February 1984, UA Press established a student writing award. Two years later, it opened an office in London. In 1988, it started a journals department that produced scholary publications.

"By the 1990s, UA Press had established itself as one of the leading publishing houses for American poets," Riffel wrote. "Along with posthumous works by Fayetteville poet Frank Stanford, the press released other books of award-winning poetry. ... In these same years, former President Jimmy Carter became a mainstay of the roster of authors as a result of his personal friendship with Williams. The press afforded Carter an opportunity to write on a wide array of topics."

Carter's books ranged from "An Outdoor Journal: Adventures and Reflections" in 1988 to a re-examination of the 1980 Camp David peace accords titled "The Blood of Abraham: Insights into the Middle East."

White became chancellor in 1997 and decided to close the press because it consistently lost money. His decision sparked controversy statewide.

"In response, Gatewood and other prominent Arkansans launched a public campaign to keep its doors open," Riffel wrote. "In 1998, White relented, admitting that the plan to shutter the press had been misguided. Largely with the help of funding from Tyson Foods in Springdale, the press reorganized itself as a nonprofit organization and continued to produce new titles.

"In the summer of 1998, the press hired Lawrence Malley as director and, under his leadership, expanded its forays into Middle East-themed books, a response in part to establishment of the UA's King Fahd Center for Middle East and Islamic Studies. In recent years, the press has made an important contribution to Arkansas history, particularly with the release of its Histories of Arkansas series, which traces the state's past from the territorial period through the modern era. Malley retired at the end of 2013, and former assistant director Mike Bieker became director."

Poetry, fiction and books on the Middle East remain part of the publishing house's focus.

Awards continue to roll in. "Das Arkansas Echo: A Year in the Life of Germans in the Nineteenth-Century South" by Kathleen Condray won the 2021 Booker Worthen Literary Prize. "The Ku Klux Klan in 1920s Arkansas: How Protestant White Nationalism Came to Rule a State" by Kenneth Barnes won the 2022 J.G. Ragsdale Book Award from the Arkansas Historical Association.

"Winthrop Rockefeller: From New Yorker to Arkansawyer, 1912-1956" by history professor John Kirk of the University of Arkansas at Little Rock was released earlier this year and is already receiving acclaim.

Still on my list to read during the winter are recent releases "Country Boy: The Roots of Johnny Cash" by Colin Edward Woodward and "Up South in the Ozarks: Dispatches from the Margins" by noted Ozarks historian Brooks Blevins of Izard County.