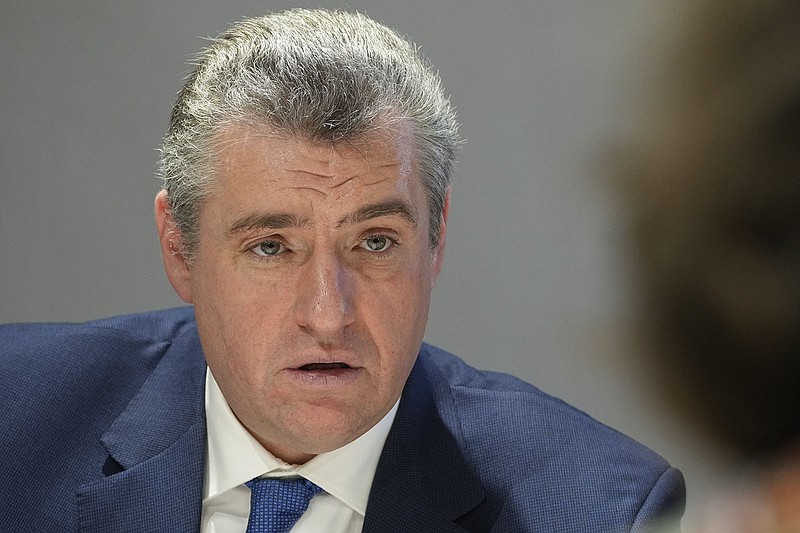 Leonid Slutsky, the head of the foreign affairs committee in the Russian parliament's lower house and the leader of the Liberal Democratic Party talks with mothers of military personnel serving in the special military operation ahead of Mother's Day in St. Petersburg, Russia, Saturday, Nov. 26, 2022. (AP Photo/Dmitri Lovetsky)

MOSCOW -- One of Russia's most prominent nationalist politicians said the Russian military does not have an adequate number of doctors among other problems, a message he delivered in a meeting Saturday with the mothers of soldiers mobilized for the fight in Ukraine.

The comments by Leonid Slutsky, leader of the populist Liberal Democratic Party and chairman of the foreign relations committee in the lower house of parliament, was a public admission of problems within the military as Russian forces suffer a series of battlefield setbacks.

"There are not enough doctors in the military units. Everyone says this. I cannot say they do not exist at all, but they are practically not seen there," Slutsky said at the meeting in St. Petersburg.

Olga Suyetina, foster mother of a soldier mobilized for the Ukraine conflict, said she has heard from her son that the troops are underequipped.

"There are no gunsights, nothing, we have to buy them by crowdfunding," she said, referring to aiming devices for guns. "There is nothing; they left Kharkiv, there was zero, there was not even polyethylene to cover the dugouts."

Slutsky, a strong supporter of Russia's fight in Ukraine, said he would address the Defense Ministry about problems that troops face in Ukraine.

"We must understand that the whole world is watching us. We are the largest state and when we do not have socks, shorts, doctors, intelligence, communication or simply care for our children, questions arise that will be very difficult to answer," he said.

The meeting came a day after President Vladimir Putin met with another group of soldiers' mothers. At that meeting Friday, he criticized what he said were skewed media portrayals of Moscow's military campaign.

"Life is more difficult and diverse that what is shown on TV screens or even on the internet. There are many fakes, cheating, lies there," Putin said.

Putin said he sometimes speaks with troops directly by telephone, according to a Kremlin transcript and photos of the meeting.

"I've spoken to [troops] who surprised me with their mood, their attitude to the matter. They didn't expect these calls from me," Putin said.

He added that the calls "give me every reason to say that they are heroes."