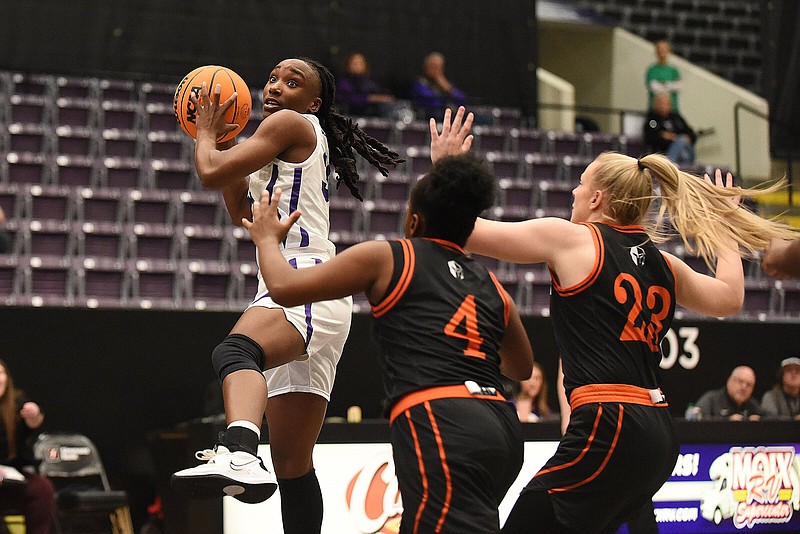 CONWAY -- A win is a win, but Saturday's was not one University of Central Arkansas women's basketball Coach Sandra Rushing thought of fondly.

UCA defeated crosstown-foe Hendrix College 65-54 Saturday morning at the Farris Center in Conway despite a fourth-quarter surge from the Warriors.

"A win is a win, but I think Hendrix outplayed us," Rushing said. "They wanted it more. They just kept driving, shooting threes and it looked like we lost a little energy and enthusiasm. I think we took them lightly."

Atkins, from Bryant, had 10 points, added 4 rebounds, 3 assists and a team-high 4 steals as a defensive spark off the bench for Rushing.

In the first half, as UCA was working to build a lead, forward Kierra Prim was the driving force.

Prim had 15 points and 11 rebounds at halftime. She finished with 24 points and 18 rebounds with 14 of those rebounds coming on the offensive end.

Standing at 5-9, Prim isn't your typical glass-cleaning forward, but she has a knack for finding the ball off missed shots -- something Rushing said she hasn't seen from a player in quite some time.

"She's mine, "Rushing said. "She plays with heart. She does the dirty work. She loves to win and is a competitor.

"She reads [the ball] and she gets 50-50 balls. You can't teach that. She knows when the ball's coming up and she goes and gets it."

As a team, UCA dominated the glass with 21 offensive rebounds and 46 total to Hendrix's 28. Kyjai Miles was second behind Prim with nine rebounds. Six Sugar Bears ended with multiple offensive boards.

Prim scored UCA's first 11 points to give the Sugar Bears a 17-5 lead after the first quarter. But just like the fourth quarter, UCA let up and Hendrix won the second quarter 15-14.

"We thought we didn't have to show up and play, and that's the bottom line," Rushing said. "We didn't lock into our [scouting report]. We gave them wide-open three-pointers, and we're trying to defend with our legs locked."

UCA led Hendrix in most of the team statistics, but one area it trailed was from behind the arc.

After Saturday's 3-for-21 shooting performance, UCA is now shooting 16.1% on three-pointers.

Two of those threes makes came from Kinley Fisher. The sophomore from Greenwood finished with 10 points.

Rushing said her biggest takeaway from Saturday was the need for urgency for her squad.

"[Saturday] showed that we need to show up and play 40 minutes," Rushing said. "We need to lock into the scout and understand that any day you can get beat."