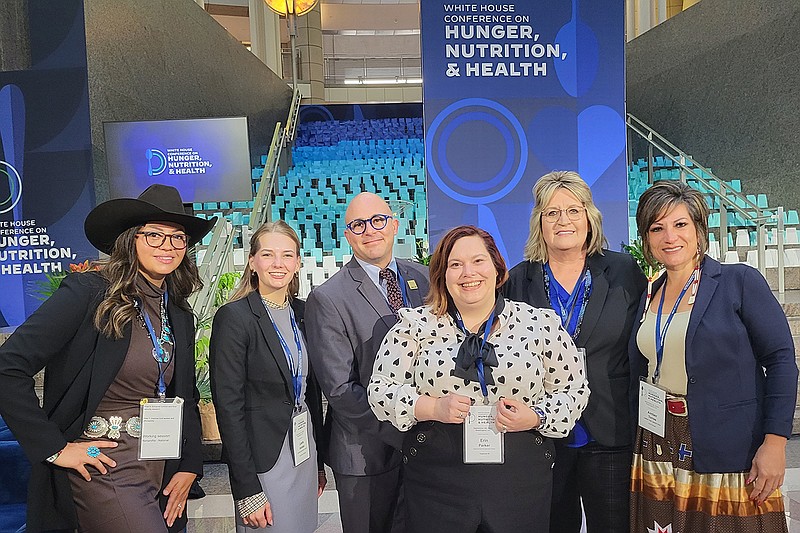 FAYETTEVILLE -- A pair of experts from the University of Arkansas, Fayetteville participated in the first White House Conference on Hunger, Nutrition and Health in more than a half-century.

Among the recommendations that emerged from the Sept. 28 conference in Washington, D.C., were:

• A pilot program to study covering medically tailored meals as part of Medicare Advantage plans for those with health problems.

• Expanding the Supplemental Nutrition Assistance Program, or SNAP -- currently, benefits average $5 per person per day -- with a focus on increased access to fruits and vegetables.

• Posting nutritional information on the front of packages rather than the back.

Susan Schneider, William H. Enfield professor of law and director of the LL.M. Program in Agricultural and Food Law at UA, said the conference -- which brought together individuals, business and government to try to find solutions -- was "definitely a step in the right direction."

"These are difficult problems to take on, and no one group can fix it," Schneider said. "Food is so essential and so connected to health -- it's in everything we do -- and if we think about it a little more, we can all benefit."

As a state, Arkansas fares poorly in food insecurity and diet-related disease metrics, a shared trait among Southern states, she said. The state's obesity rate is over 40%, and -- nationally -- diet-related diseases account for $173 million to $190 million in health care costs annually, so short-term investments are advisable to reduce the force of long-term consequences.

For example, when children experience food insecurity, they perform worse in school, which can negatively affect them for life, she said. Workplaces can invest in employee health, too, with "little things that make a difference," such as providing healthier food options rather than the traditional chips and candy of vending machines -- "have an apple instead of those chips."

The first White House Conference on Hunger, Nutrition and Health, convened in 1969, led to the expansion of SNAP, formerly known as food stamps; helped create Women, Infants and Children, which serves half the babies born in America by assisting mothers with food and other aid; and began other nutrition support systems that aimed to dramatically reduce starvation in America.

Bipartisan legislation in Congress directed the White House to convene again, with the goal of addressing current challenges and setting the nation's food policy agenda for the future, as President Joe Biden's stated aim is to end hunger in America by 2030.

Many of the policy recommendations that emerged from the conference would require congressional approval, while others will need cooperation from the private sector, but the Biden Administration has already announced $8 billion in commitments from private companies, industry groups and charitable foundations.

Erin Parker, the executive director of the Indigenous Food and Agriculture Initiative at UA-Fayetteville, is "hopeful for these outcomes, and it's a great starting point to have these conversations, but now the important work comes afterward. Everybody eats, so [these issues] impact everyone."

Expanding the Food Distribution Program on Indian Reservations -- in which the U.S Department of Agriculture provides foods to income-eligible households living on Indian reservations and to Native American households residing in designated areas near reservations or in Oklahoma -- and SNAP, both goals from the conference, would have "a pretty significant impact" on the country's native population, said Parker, who joined Schneider at the conference.

"We've gotten a lot of calls [from members of those communities] about expanding [the program], and 25% of American Indian/Alaska Natives rely on food stamps each month," Parker said.

Under the guidance of visiting assistant professor Kelly Nuckolls last summer, students in the LL.M. program helped Schneider and Parker prepare by researching and writing about food law and topics that would be addressed at the conference, according to the university. Their research, reviewed by LL.M. faculty, was then submitted to the White House Conference team.

In Schneider's program, "our focus is really on a lot of what the conference was exploring," particularly the system of food from production to plate, and "we talk a lot about food insecurity and obesity, she said. "I was honored to participate -- it's fantastic to have two representatives from Arkansas -- and proud to represent our school and students."

More than 600 attended the September conference in person, with thousands more online, and Parker was keenly interested in discussions about native producers and access to culturally appropriate food, both of which are among her specialties.

For many native producers -- be they ranchers or crop-focused farmers -- "it's not just about accessing a market, but creating a market," particularly for those in rural and/or remote locations where broadband internet isn't widely available, she said. Being able to earn a living by selling their product doesn't benefit only them, but it can create more jobs and prosperity in their communities, which is especially valuable on tribal reservations -- many of which battle poverty, she said.

In the U.S., the market value of agricultural products sold by American Indian/Alaska Native producers increased from $3.24 billion in 2012 to $3.5 billion in 2017 -- and has continued to rise in the years since, Parker said. Over that same five-year period, the number of those farms increased by 7%.

It's also crucial to make sure native individuals have access to nutritious, healthy, culturally appropriate foods, whether on tribal reservations or not, Parker said. As one native woman who doesn't live on tribal land recently told Parker, the need for those foods "didn't end when I left my land."

And food can be deeply spiritual for native individuals, Parker said. Many foods are "embedded in the culture, really important from a holistic health standpoint."

Schneider was especially pleased that the conference looked at the country's food challenges in a "holistic" fashion and "brought together rural and urban."

Rural areas struggle with food insecurity, and there's often a lack of access to nutritious food, and dietary diseases "are a huge problem," she said. That problem of access is intertwined with obesity, as "a lot of the time it's cheaper to buy unhealthy, ultra-processed food than healthy food."

Parker was likewise happy that the conference emphasized food and nutrition in rural America, because "rural America has unique needs, and we can't leave rural America behind."

Arkansas is in many respects a rural state, and it's also "such a huge agriculture state, [with] 14 million acres of farmland," she said. Arkansas is the top rice-producing state in America, yet "one in five Arkansans are food-insecure, and I was one of them growing up, so I come to this from a personal place."

At least 10% of the American public is "food insecure," meaning they're not sure where their next meal is coming from, and one in six Americans use the charitable food sector for nutrition assistance. More than 40% of Americans are considered obese, in part because healthier food tends to be more expensive and less available -- particularly in less affluent communities.

Obesity has even been deemed "a national security issue" by the U.S. military, Schneider said. Roughly 25% of all applicants to the military are medically disqualified because of excessive weight and body fat.

"I've been studying these issues for quite a few years, but it was empowering to see so many people talking about a problem that exists in all of our communities and acknowledging we can do better, because we have to do better," Schneider said. "We're looking for solutions where people can help other people."