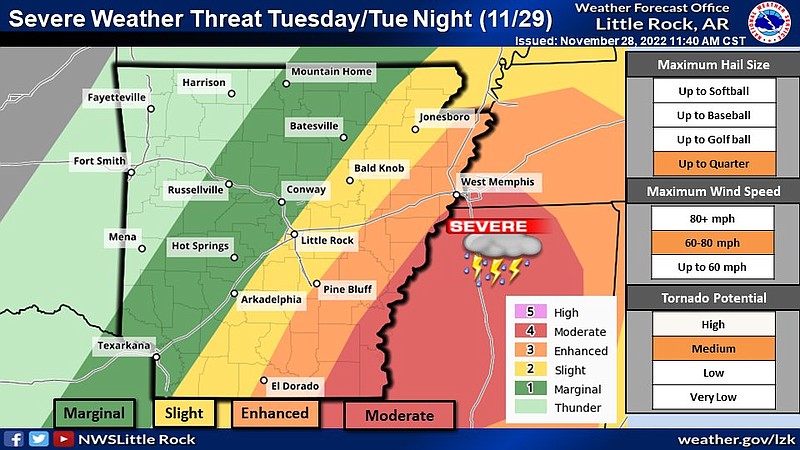 Severe weather, including tornadoes, is forecasted to hit eastern parts of the state Tuesday evening, meteorologists from the National Weather Service said.

A regional tornado outbreak has been forecasted, by the Storm Prediction Center, said Dennis Cavanaugh with the weather service in North Little Rock.

The meteorologist explained on Monday morning that an “outbreak” is informally defined as a storm system producing 10 or more tornadoes that have longer tracks and could be ranked as EF2 or stronger.

A news release from the National Weather Service said southeast Arkansas, northeast Louisiana, northwest Mississippi and southwest Tennessee could be hit by an outbreak.

In Arkansas, the “worst threats” are for the eastern parts of the state, Cavanaugh said. The weather service said on Twitter that “damaging winds and tornadoes look to be the primary threat, with some large hail up to quarter [size] possible with the strongest storms.”

The meteorologist advises residents of eastern and southeastern Arkansas to ensure that the safest shelter in their homes – ideally an internal room with four walls – is prepared.

“Whatever clutter you have in there, be it Christmas decorations or whatever, clear it out,” he said. “When we give the warning, you may only have five minutes to react. You want to be able to get you and your family in there safe.”

He suggested stocking shelters with basic supplies as well, like bottles of water or bike helmets, for extra protection.

Cavanaugh also warned that there is still a chance the exact timing of – now expected to be after sunset Tuesday – and where the severe weather will occur could shift again. As of Monday, all the risk areas in the state shifted east by about 40 miles compared to Sunday, a release from the National Weather Service said.

He compared the forecasted tornado outbreak to the one the state saw earlier this month.

“This time it is a bit different. We have an outlook that was able to alert us this far out. It is part of a stronger storm with big factors indicating the threat. Last time, it was smaller things that added up to create that threat,” Cavanaugh said.

While more western and central parts of Arkansas are at a lower risk for tornadoes, they could see strong winds or quarter size hail, according to the meteorologist.

“Those storms will hit earlier in [Tuesday] afternoon and will be more isolated and scattered; they have less of a chance of becoming a supercell, which is when a storm begins to rotate,” Cavanaugh said.

Parts of eastern Arkansas are expected to get, on average, half an inch to an inch of rain, he said.

Little Rock is forecasted to get anywhere between .10 inch or .25 inch of rain, Cavanaugh said.

“It really depends on where the storms form and how long they stay, some may get that full quarter inch of rain and some may get none at all,” he said.

Little Rock is included in a slight risk warning, meaning short-lived but intense storms could form.

In addition, the severe weather forecast has delayed the planned outage of the Little Rock 88D, KLZK, radar, the weather service announced on Twitter Monday morning.

“The maintenance crew is going to be upgrading the pedestal that allows the radar to rotate,” Cavanaugh said, “But this crew moves around and their schedule is so tight we weren’t sure if we were going to be able to. They are working on upgrading the radar’s software today, so it is down, but it should be back for tomorrow.”

He said the improvements the crew is there to make are expected to extend the life of the radar, not necessarily change the function of it.

The work is set to begin again on Wednesday, and the radar will remain down until the work is completed in about two weeks, the weather service said.

The meteorologist said the National Weather Service is a public safety organization and, while the radar is useful, there are ways to supplement it that include using surrounding radars and satellites.

“We always had your back and will still be working to send out alerts; now we just have the radar as well.” said Cavanaugh, “We work to help make sure people don’t get hurt by the weather.”