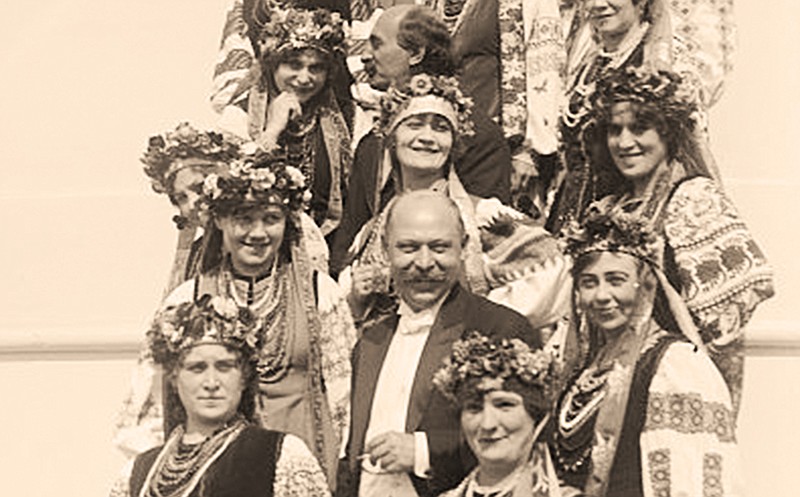 Photograph shows members of the Ukrainian National Chorus between 1920 and 1925 with conductor Alexander Koshetz ((Oleksander Koshyts). (Library of Congress Prints and Photographs Division)

A century ago this week, the Ukrainian National Chorus performed two concerts in Little Rock.

And Friend Reader is thinking, "That's nice. So what?" I'll tell you so what.

By the time this large, colorfully clad company from Ukraine made its way across the Atlantic to travel around the nation and visit Arkansas, the republic they were created to represent no longer existed. They kept singing anyway.

A Ukrainian People's Republic arose from the collapse of the Russian Empire in 1917. Despite factional disputes, it survived as a sovereign state from 1918-1921, when the Bolshevik Red Army reinforced a militant Ukrainian Soviet faction and the country became a founding member of the Soviet Union.

While the republic lasted, its leader commissioned and funded a folk singing troupe to travel around Europe showing off the sartorial style and dynamic a cappella singing of Ukraine, to raise support (re: donations) for its independence. That first troupe split up over what sounds to me to have been creative differences, but from it came the Ukrainian National Chorus led by the conductor and composer Aleksandr Koshetz (your spelling may vary; this is how the Arkansas Gazette and Arkansas Democrat spelled his name in 1922).

From 1919 to 1922, they toured Europe, to great reviews. After the Bolshevik force outlawed the republic government, their patron, the ousted republican leader, couldn't provide their funds, but they continued their tour. And in September 1922, the 45-member chorus crossed the Atlantic from Hamburg to New York on the Cunard passenger ship RMS Caronia. After landing in New York on Sept. 26, they set about meeting reporters and scheduling concerts.

The Ukrainian History and Education Center in Somerset, N.J., has posted a pictorial history of the group's world tour on its website (see arkansasonline.com/1128new).

Can you guess what they sang?

We should not hesitate to answer with "Carol of the Bells" — there is no other Ukrainian choral piece so well known to Americans. The first time they sang the tune on this continent was Oct. 5, 1922, to a packed house at Carnegie Hall.

But it was not today's familiar, urgent Christmas carol, and not merely because they didn't use English. It had nothing to do with Christmas. It wasn't even about bells.

The song was titled "Shchedryk" (from a Ukrainian word meaning "bountiful"). In 1916, during a time of violent upheaval in eastern Europe, Ukrainian composer Mykola Leontovich adapted an ancient, four-note folk tune and wrote lyrics for it. His lyrics depict a sparrow that lands outside a man's house and loudly proclaims that he has all kinds of luck coming: healthy livestock, money and a beautiful wife.

The melody came from a sort of winter's greeting traditionally sung door-to-door by Ukrainian village girls on Jan. 13 — New Year's Eve on the Julian calendar. Homeowners rewarded the singers with treats.

In 2004, Anthony Potoczniak, a graduate student in anthropology at Rice University, researched this song. The school's press release about his work has been quoted and remarked upon over and over as Christmas approaches and beset media drones forage across the internet for something new to say about caroling. (See arkansasonline.com/1128source.)

"Shchedryk" didn't become "Carol of the Bells" until the late 1930s, when an American, Peter Wilhousky, decided the song sounded like bells, rewrote the lyrics and also published the song. Its identity as a Christmas standard began with annual performances by his choirs.

[Video not showing up above? Click here to watch » arkansasonline.com/1128carol/]

BACK TO THE PAST

In 1922 after the chorus booked the Kempner Theater in Little Rock, glowing reports of their reception in other cities began appearing in both papers. The director, Alexander Koshetz, was described as a masterful Cossack, Slav, Russian.

"Directing a large chorus of voices without an accompanying orchestra is no easy job, but those who heard the concert of the Ukrainian chorus at the Kempner theatre last Saturday night, could not help but marvel at the absolute control that Professor Koshetz exercises over this singers. They respond to his every wish and in many instances the response is so delicate that it goes unnoticed."

Amusingly, the old news conveys astonishment that he didn't even use a baton, as though a baton is what gives a conductor power. As Friend Reader is aware, batons are not like the wands one might acquire at Hogwarts. They don't cause the music.

The soloist, Nina Koshetz, happened to be his niece; her voice was wonderful, of course, and she was "a leading soprano of the Moscow opera." She really was quite something, as YouTube attests: see arkansasonline.com/1128nina.

From an item in the Nov. 19, 1922, Democrat, I gather that the Kempner booked the chorus (or vice versa) for one performance. But somehow Nina Koshetz got on the wrong train and didn't arrive in Little Rock in time for the show. In an eloquent review, the Gazette praised her stand-in, Mlle. Oda Slobodskaja, adding, "Although by a regrettable mistake, Mme. Nina Koshetz, leading soprano of the Moscow opera who was to have sung here, was sent on to Nashville, Mlle. Slobodskaja left no cause to regret the change of soloist. Her program, which was in itself a full concert cycle, was rich in dramatic art and lyric beauty."

A second show was scheduled for Dec. 1, featuring the fair Nina Koshetz.

Here's part of the rapturous praise the Gazette lavished on the first one:

"The heart of 'Little Russia,' mysterious, compelling; bubbling into spontaneous humor or darkening into tragedy; the soul of a people bowed by centuries of oppression, yet preserving ideals and traditions as old as the history of their race; the passion and poetry of a race, rich in romance, find expression in the music of Ukrainia. And as its music is above all human, it is fitting that its instrument of expression should be the voices of its people. ...

"Listening, one could hear the throbbing notes of the cello, the delicate overtones of the violin, the plaintive reeds and woodwinds as a background for the theme until it seemed hardly possible that there was no accompaniment save the human voice."

The chorus also included children, and they sang "Shchedryk," described as "a Christmas or New Year's song."

The Arkansas Democrat published their program, and so we know they also performed "Our Lady of Potchaiv," a canticle; "There Was a Window"; "Behind the Mountain"; "Shchedryk"; "You Little Grey Cuckoo"; "Autumn Night"; Song of Liubasha from "The Tsar's Bride"; Eastern Romance; reverie and dance from "The Fair of Sorotchinsk"; "Poor Hawthorne"; "I Wish to Go Back to the Meadow"; a folk song lullaby; "The Young Monk"; "Hey, I Am a Cossack of Ukrainia"; "Over the Steppe"; "Oi, Mamo"; "Vocalise"; "Old Russian Song"; "The High Mountain"; "The Violin Is Playing in the Street"; "I Sat Spinning"; "Koza"; and — my favorite title — "Mushrooms."

Many of these were composed by the conductor.

And from several ads in both newspapers for phonograph albums, I think they came bearing merch, in the form of a Brunswick phonograph record, available at the Hollenberg Music Store ... and, today, on YouTube. See arkansasonline.com/1128carol.