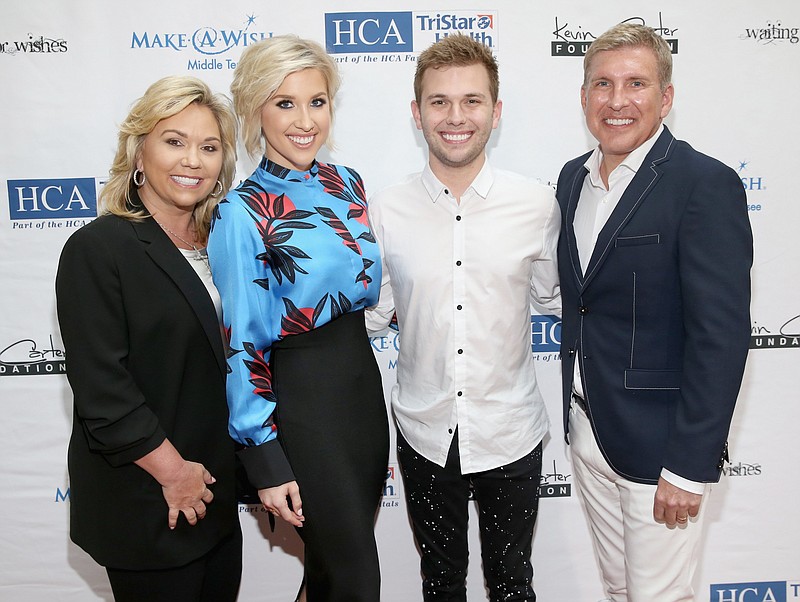 Julie Chrisley (left), Savannah Chrisley, Chase Chrisley and Todd Chrisley are shown in a 2018 file photo. The parents are going to prison and Savannah is sad on her latest podcast. (Getty Images for The Kevin Carter Foundation/TNS/Terry Wyatt)

In an emotional podcast released before Todd and Julie Chrisley were sentenced to prison terms, Savannah Chrisley reacted to her parents' tax evasion case and talked about what's to come.

"I'm grieving the loss of parents that are still alive," Savannah Chrisley said in the latest episode of her podcast "Unlocked."

Chrisley, who at the time of recording the podcast did not know how much time her parents would serve, said the family planned an appeal. She said she will take custody of her 16-year-old brother Grayson, the Chrisleys' youngest child, and her 10-year-old niece Chloe, whom Todd and Julie Chrisley got full custody of in 2016.

"I'm not really sure what my future looks like," Chrisley said in the podcast. "I have to be a positive role model for Chloe and Grayson. I have to show up, no matter how hard it gets, I have to show up."

They were found guilty on all counts of bank fraud and tax evasion by a federal jury in June. The Chrisleys are also ordered to pay restitution that will be determined at a later date. The couple has until Jan. 15, 2023, to report to prison.

Savannah Chrisley claimed her parents were convicted "off of lies." Chrisley said her parents' case is about "proving a point" and for prosecutors to "make a name for themselves."

"I know what my parents have done and haven't done. I'm going to stick by them and their innocence. We are going to continue to fight and file for an appeal," she said.

She pledged to work with organizations that help families affected by incarceration.

"It's just really sad how our justice system works and continues to fail people time and time again," she said. "I vow to be a voice to those who don't have a voice and to stand up for those who can't fight for themselves."

In a statement, the Chrisleys' attorney, Alex Little, said they plan to file an appeal in the coming weeks.

"Yesterday was a difficult day for the Chrisley family. But Todd and Julie are people of faith, and that faith gives them strength as they appeal their convictions. Their trial was marred by serious and repeated errors, including the government lying to jurors about what taxes the couple paid. Based on these issues, we are optimistic about the road ahead," Little said in a statement.