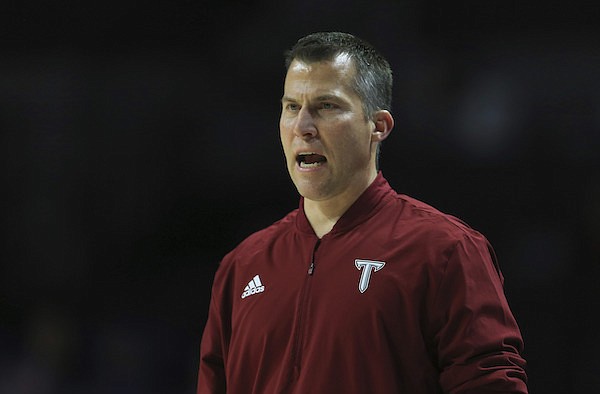 FAYETTEVILLE -- The pressure defense for No. 11 University of Arkansas finally wore down a confident, plucky Troy team in Monday's 74-61 win at Walton Arena.

The Trojans led for more than 20 minutes, but the Razorbacks took over late with a 17-0 run in a span of 5:22. Troy missed 7 of its final 8 shots while Arkansas, sparked by one-on-one takes by Ricky Council, hit its last 7 shots.

The Razorbacks also turned 18 Troy turnovers into 19 points while holding the visitors to 25 points below their season scoring average of 86.

Troy Coach Scott Cross said the Trojans were not coming for a paycheck, that they were coming to get a win, and his team played like it for large stretches.

"We had a chance and I felt like we could win it all the way through until probably the last couple of minutes," Cross said. "I thought our guys, they did everything they could. They played hard. They battled. We just ran out of gas."

The Trojans were without leading scorer Duke Miles, lost Nate Tshimanga to injury in the first half and forward Christian Turner was in and out with leg cramps.

Arkansas forward Makhi Mitchell got off to a hot start, even as his teammates didn't.

Mitchell scored the Hogs' first six points on a put-back of his own miss, a layup, and another put-back after Trevon Brazile's missed three-point shot. The last gave the Razorbacks a 6-5 lead at 16:17, their last until the 3:49 mark of the half.

Troy opened in a zone and the Hogs struggled offensively against it.

The 6-9, 230-pounder had a team-high 10 points by halftime on 5-of-6 shooting with 9 rebounds. He came up one rebound shy of his first double-double with the Hogs and finished with 14 points on 6-of-8 shooting with 3 blocked shots.

"It just kind of came to me," Mitchell said. "I was in the right spot at the right time. Coach has been emphasizing that he needs more out of the bigs as far as blocking shots and everything on the defensive end, so I just did my job tonight."

Arkansas made 3 three-pointers for the second consecutive game, going 3 of 11, while Troy made 9 of 28 after missing 7 of its last 8 from beyond the arc following an 8 of 20 start.

The Razorbacks went 3 of 11 from long range, matching their second-lowest total of the year. One of them, a 28-footer by Ricky Council from the right wing, was a dagger at the end of the shot clock, giving the Hogs a 62-58 lead at the 4:14 mark.

Arkansas went 2 of 16 from three-point range in a 74-48 win over Fordham and 3 of 17 in its 78-74 overtime win over San Diego State. The Razorbacks entered the game last in the SEC and 310th in the country with 17.8 three-pointers taken per game.

Ricky Council gave the crowd a big reason to cheer late in the first half.

After the Razorbacks cut a 25-18 deficit to one point a couple of times, Council put the Hogs in front 28-27 moments after a Makhi Mitchell put-back of a Jordan Walsh miss.

With Arkansas pressing, Council tipped the ball away from Christyon Eugene in the backcourt near the left sideline, and quickly stormed in for a tomahawk dunk.

Later in the half, Council drove the lane, pulled the ball back as if he was loading for another dunk but adjusted in mid air and made a scoop layup to pull Arkansas within 32-31.

Freshman Nick Smith made his college debut against the Trojans wearing a long compression sleeve on his right leg. The anticipation for the debut of the McDonald's All-American and 5-star prospect had been building for days, since he opened the season rehabbing from a knee issue.

As Smith went to mid-court the buzz in Walton Arena grew and peaked when he was announced as a substitute at the 14:08 mark of the first half.

Smith pulled a six-minute stint and went 0 for 2, including a miss from 3-point range, and grabbed one rebound. The 6-5 guard from Jacksonville did not play in the second half, though Eric Musselman said he thought several times about reinserting him but didn't think it was fair in a tight game.

"When you've coached a long time, I've been down this situation a lot," he said. "Player is on a minutes restriction.

Junior guard Davonte Davis was not at Walton Arena for the game.

"I think we're just respecting Devo's privacy," Arkansas Coach Eric Musselman said. "Our thoughts are with him and that's where it is right now."

Guard Anthony Black was named an SEC co-freshman of the week by the conference office on Monday after his work in the Maui Jim Maui Invitational last week.

Black averaged 22.3 points, 4.7 rebounds and 4.3 assists in three games in the Maui tournament. The former McDonald's All-American from Duncanville, Texas, had back-to-back 26-point games in an 80-54 win over Louisville and a 90-87 loss to Creighton to open the tournament. He was also selected as the CBS Sports/United States Basketball Writers Association of America freshman of the week for his efforts, which included 22 of 40 (55%) field goal shooting after going 19 of 29 (65.5%) in the first two games.

Black shared the honor with Ole Miss guard Amaree Abram, who averaged 20.7 points, 3 rebounds and 3.3 assists in games against Stanford, Siena and Oklahoma at the ESPN Events Invitational.

The SEC/Big 12 Challenge will fall away after the current season and will be replaced by the ACC/SEC Challenge for the 2023-23 season in both men's and women's basketball, the leagues announced Monday.

All of the 28 games in the challenge, which will expand to 30 games for the 2025-26 season, will be televised on ESPN platforms.

"We are excited women's and men's basketball student-athletes will have the opportunity to compete with their colleagues from the ACC as we initiate a new Basketball Challenge experience," SEC Commissioner Greg Sankey said in a release.