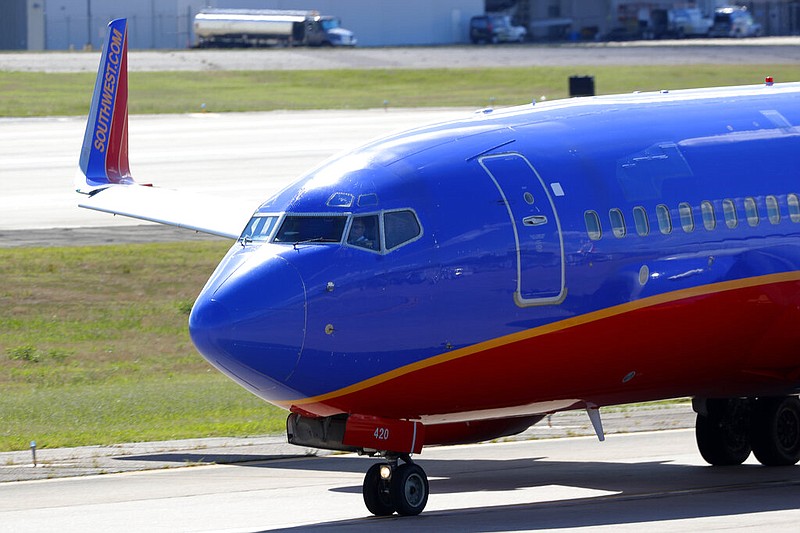 A Southwest Airlines jet taxis as it prepares to take off from Love Field in Dallas in this June 24, 2020 file photo. (AP/Tony Gutierrez)

A woman appeared in federal court Tuesday morning after FBI agents say she tried to open the emergency door on an airliner and bit another passenger, forcing the plane to make an emergency landing in Little Rock last week, according to a criminal complaint filed Monday.

Agbegninou appeared before U.S. Magistrate Judge Joe Volpe, where her counsel expressed concern over her mental fitness to stand trial, court records show. Volpe had her turned over to U.S. Marshal Service custody until she completed a competency evaluation.

Little Rock police arrested Agbegninou after the plane touched down at Bill and Hillary Clinton National Airport, an unplanned stop on the plane's route from Houston to Columbus, Ohio.

Officers had gotten a report that she had tried to breach the cockpit during flight, and found Agbegninou restrained at the rear of the plane using plastic flex cuffs, according to the federal complaint.

A flight attendant, referred to as Witness 1 in the complaint, said that Agbegninou walked to the rear of the plane and was staring at the rear exit door.

When the witness asked Agbegninou to return to her seat if she wasn't going to use the restroom, Agbegninou reportedly shoved the flight attendant and tried to reach the door.

A second flight attendant said Agbegninou was pulling on the door handle while the aircraft was at 37,000 feet.

A passenger, referred to as Victim 1, recalled hearing someone say "she's trying to open the door," and wrestled Agbegninou to the ground, pinning her down with their knees. Agbegninou then reportedly bit Victim 1 on the right thigh.

Victim 1 told investigators that they grabbed Agbegninou's neck in an attempt to get her to stop biting but did not choke her. She began to hit her own head against the floor, which Victim 1 stopped her from doing.

It was not clear from the complaint where the plastic cuffs used to restrain Agbegninou until police arrived came from or who put them on.

Victim 1 was taken to an area hospital for treatment of the bite, and the complaint states that the victim is a military veteran with PTSD and anxiety, leading them to call a veteran's crisis hotline after the fight with Agbegninou.

The flight took off and continued its route to Columbus shortly after the arrest, authorities have said.

Agbegninou initially refused to speak to Patton, but eventually agreed to waive her Miranda rights after Patton read them to her twice.

According to the complaint, she said she was on her way to Maryland to stay with a family friend. Agbegninou bought a ticket that same day without telling her husband and boarded the plane without any luggage. She said she could not remember the last time she had traveled anywhere by plane.

Agbegninou recalled feeling like she could not breathe on the plane and got up. She said she remembers trying to open the door and biting someone, she told Patton.

She said, according to the complaint, she has anxiety and was extremely anxious at the time, causing her to do things she usually would not.