He gives first official estimate in two months of protests by The Associated Press | November 29, 2022 at 5:10 a.m. 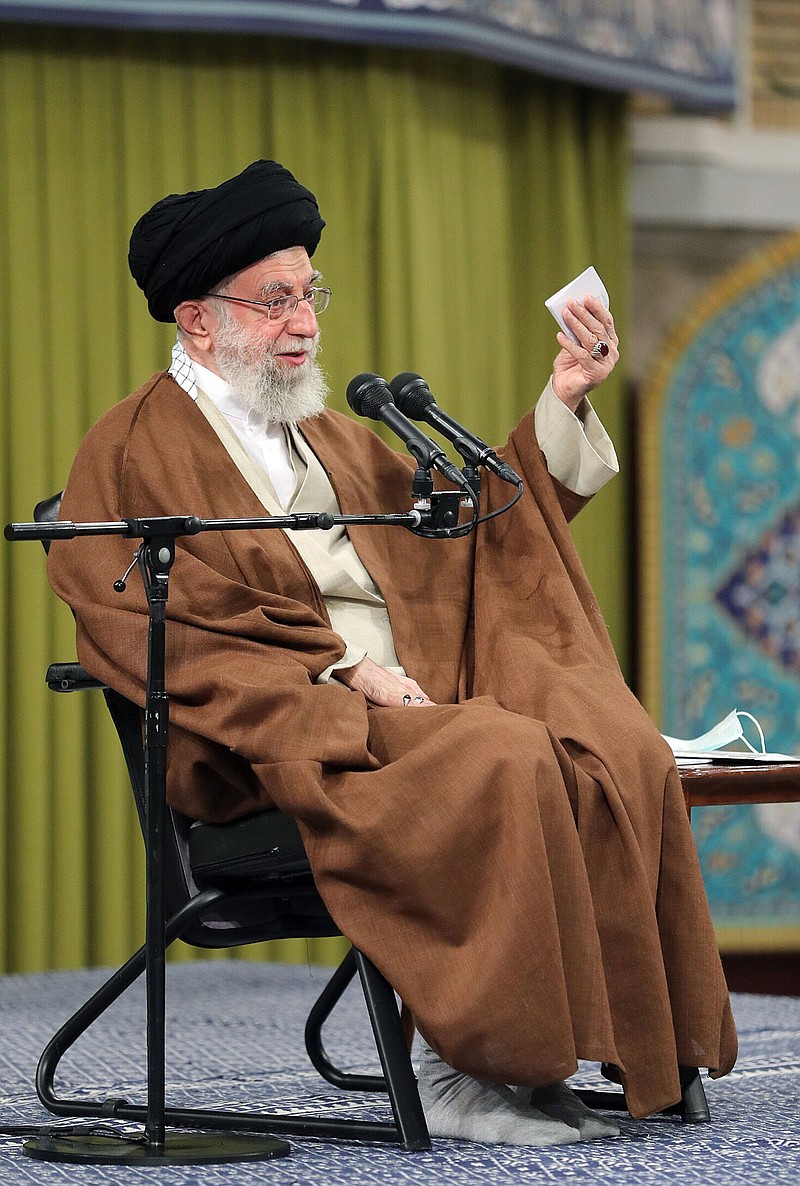 In this picture released by the official website of the office of the Iranian supreme leader, Supreme Leader Ayatollah Ali Khamenei speaks during a meeting with a group of Basij paramilitary force in Tehran, Iran, Saturday, Nov. 26, 2022. Iran's supreme leader praised paramilitary volunteers tasked with quashing dissent on Saturday in a televised address as dozens of eye doctors warned that a rising number of demonstrators have been blinded by security forces during anti-government protests. The Basij have taken a leading role in clamping down on demonstrations that began Sept. 17, ignited by the death of a young woman while in the custody of Iran's morality police. (Office of the Iranian Supreme Leader via AP)

DUBAI, United Arab Emirates -- An Iranian general on Monday acknowledged that more than 300 people have been killed in the unrest surrounding nationwide protests, giving the first official word on casualties in two months.

That estimate is considerably lower than the toll reported by Human Rights Activists in Iran, a U.S.-based group that has been closely tracking the protests since they erupted after the Sept. 16 death of a young woman being held by the country's morality police.

The activist group says 451 protesters and 60 security forces have been killed since the start of the unrest and that more than 18,000 people have been detained.

The protests were sparked by the death of 22-year-old Mahsa Amini, who was detained on charges of violating the Islamic Republic's strict dress code. They quickly escalated into calls for the overthrow of Iran's theocracy and pose one of the most serious challenges to the ruling clerics since the 1979 revolution that brought them to power.

Gen. Amir Ali Hajizadeh, the commander of the aerospace division of the paramilitary Revolutionary Guard, was quoted by a website close to the Guard as saying that more than 300 people have been killed, including "martyrs," an apparent reference to security forces. He also suggested that many of those killed were ordinary Iranians not involved in the protests.

He did not provide an exact figure or say where his estimate came from.

Authorities have heavily restricted media coverage of the protests. State-linked media have not reported an overall toll and have largely focused on attacks on security forces, which officials blame on shadowy militant and separatist groups.

Hajizadeh reiterated the official claim that the protests have been fomented by Iran's enemies, including Western countries and Saudi Arabia, without providing evidence. The protesters say they are fed up after decades of social and political repression, and deny having any foreign agenda.

The protests have spread across the country and drawn support from artists, athletes and other public figures. The unrest has even cast a shadow over the World Cup, with some Iranians actively rooting against their own national team because they see it as being linked to the government.

The niece of Iran's Supreme Leader Ayatollah Ali Khamenei recently called on people to pressure their governments to cut ties with Tehran over its violent suppression of the demonstrations.

In a video posted online by her France-based brother, Farideh Moradkhani urged "conscientious people of the world" to support Iranian protesters. The video was shared online this week after Moradkhani's reported arrest on Nov. 23, according to the activist group.

Moradkhani is a long-time activist whose late father was an opposition figure married to Khamenei's sister and is the closest member of the supreme leader's family to be arrested. The branch of the family has opposed Khamenei for decades and Moradkhani has been imprisoned on previous occasions for her activism.

"I ask the conscientious people of the world to stand by us and ask their governments not to react with empty words and slogans but with real action and stop any dealings with this regime," she said in her video statement.

APA quoted the Austrian Foreign Ministry confirming that Massud Mossaheb was given indefinite medical leave. The ministry said "intensive diplomatic efforts" had led to his release, which was first reported by Austrian daily Die Presse. There was no immediate comment from Iran.

Mossaheb was arrested on suspicion of espionage in early 2019 during a visit to the capital, Tehran, and later sentenced to 10 years in prison. He must remain in Iran and report to authorities every other week, APA reported.