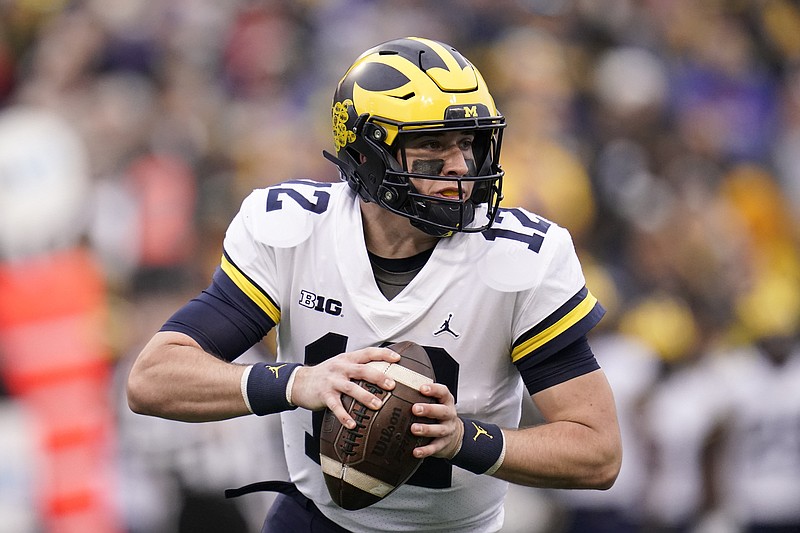 The Kansas City Chiefs are signing two-time Pro Bowl running back Melvin Gordon to their practice squad, a person familiar with the decision told The Associated Press, adding some much-needed depth with a player that was recently released from the AFC West rival Denver Broncos. The person spoke on condition of anonymity Monday because the signing was not yet official. Gordon was cut by the Broncos last week amid fumble problems that plagued the 2015 first-round pick during his time in Denver. While he ran for 318 yards and caught 25 passes for 223 yards in 10 starts, averaging 3.5 yards per carry, Gordon also fumbled five times in 10 games, including a costly one in a loss to the Las Vegas Raiders.

Michigan quarterback Cade McNamara has entered the transfer portal, team spokesman Dave Ablauf confirmed on Monday. McNamara had a season-ending injury to his right knee on Sept. 17 against Connecticut, one game after J.J. McCarthy won the starting job. McCarthy will lead the second-ranked Wolverines against Purdue on Saturday night in the Big Ten Championship Game in Indianapolis, needing a win to earn a spot in the College Football Playoff. Last year, McNamara helped Michigan end an eight-game losing streak to rival Ohio State and go on to win the conference championship for the first time since 2004. The third-team All-Big Ten player in 2021 threw for 2,576 yards with 15 touchdowns and 6 interceptions.

Middle Tennessee will play San Diego State in the Hawaii Bowl on Dec. 24 on the campus of the University of Hawaii after the bowl game was canceled in 2020 and 2021 because of the coronavirus pandemic. The Blue Raiders (7-5) announced Monday they have accepted an invitation to play in the game after winning four of their last five to become bowl eligible. Middle Tennessee will be playing in its sixth bowl in eight seasons and 10th overall under Coach Rick Stockstill. San Diego State (7-5) of the Mountain West Conference won five of its final seven to become bowl eligible.

When UNLV began this season 4-1, coach Marcus Arroyo's job security wasn't in question. Then the Rebels lost six games in a row to seemingly fall out of bowl contention, and even a victory over their biggest rival Saturday wasn't enough to save Arroyo's job. Just two days after UNLV defeated Nevada 27-22, Athletic Director Erick Harper announced his decision Monday to move on from Arroyo, who went 7-23 over three seasons. Arroyo had two years left on his $7.7 million contract. Harper said Arroyo would be paid a $2.3 million buyout over the remainder of that term. UNLV spokesman Andy Grossman said the money for the buyout would be privately raised. Harper said he would not use a firm to conduct the search, and that he prefers a candidate with head coaching experience. Such a criteria could make Bryan Harsin an attractive candidate. Harsin was fired in just his second season at Auburn, but he went 69-19 over seven seasons at Mountain West rival Boise State and was ranked in the final AP poll four times.

Tiger WD's from own event

Tiger Woods was out before he was officially back, withdrawing Monday from his Hero World Challenge with plantar fasciitis in his right foot. The Hero World Challenge was to be the start of a December in golf ruled by Woods, who also has a made-for-television match next weekend, followed by the PNC Championship with his 13-year-old son on Dec. 17-18. Two of those are still on his schedule. The foot injury was a surprise and is a big setback for those who haven't seen Woods play since July at St. Andrews. The Hero World Challenge has network coverage on NBC for the weekend. "In preparation and practice for this week's Hero World Challenge, I've developed plantar fasciitis in my right foot, which is making it difficult to walk," Woods said on Twitter. "After consulting with my doctors and trainers, I have decided to withdraw this week and focus on my hosting duties. My plan is still to compete in The Match and the PNC Championship." The Match is Dec. 10 with Rory McIlroy as his partner competing in a 12-hole match against Jordan Spieth and Justin Thomas. Woods has played only three tournaments this year because of a right leg weakened by a February 2021 car crash outside Los Angeles that shattered so many bones that Woods said doctors contemplated amputation.