Republicans skeptical of equipment by Compiled by Democrat-Gazette Staff From Wire Reports | November 29, 2022 at 5:30 a.m. 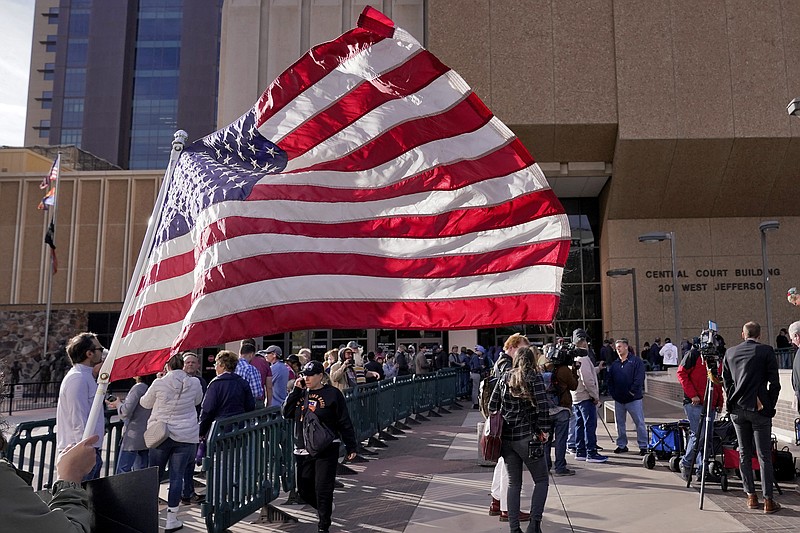 People wait to enter the Maricopa County Board of Supervisors auditorium prior to the board's general election canvass meeting, Monday, Nov. 28, 2022, in Phoenix. (AP Photo/Matt York)

PHOENIX -- Republican officials in a rural Arizona county refused Monday to certify the 2022 election despite no evidence of anything wrong with the count, a decision that was quickly challenged in court by the state's top election official.

Secretary of State Katie Hobbs, a Democrat who narrowly won the race for governor, asked a judge to order county officials to canvass the election, which she said is an obligation under Arizona law. Lawyers representing a Cochise County voter and a group of retirees filed a similar lawsuit Monday, the deadline for counties to approve the official tally of votes, known as the canvass.

The two Republican county supervisors delayed the canvass vote until Friday, when they want to hear once more about concerns over the certification of ballot tabulators, though election officials have repeatedly said the equipment is properly approved.

State Elections Director Kori Lorick wrote in a letter last week that Hobbs is required by law to approve the statewide canvass by next week and will have to exclude Cochise County's votes if they aren't received in time.

That would threaten to flip the victor in at least two close races -- a U.S. House seat and state schools chief -- from a Republican to a Democrat.

Hobbs' lawsuit asks the Cochise County Superior Court to order officials to certify by Thursday. Failing to certify would undermine the will of the county's voters "and sow further confusion and doubt about the integrity of Arizona's election system," lawyers for Hobbs wrote.

"The Board of Supervisors had all of the information they needed to certify this election and failed to uphold their responsibility for Cochise voters," Sophia Solis, a spokeswoman for Hobbs, said in an email.

Arizona law requires county officials to approve the election canvass, and lawyers in several counties warned Republican supervisors they could face criminal charges for failing to carry out their obligations.

Election results have largely been certified without issue in jurisdictions across the country. That's not been the case in Arizona, which was a focal point for efforts by former President Donald Trump and his allies to overturn the 2020 election and push false narratives of fraud.

Officials in a northeastern Pennsylvania county where paper shortages caused Election Day ballot problems deadlocked Monday on whether to report official vote tallies to the state, effectively preventing their certification of the results.

Arizona was long a GOP stronghold, but this month Democrats won most of the highest-profile races over Republicans who aggressively promoted Trump's 2020 election claims. Kari Lake, the GOP candidate for governor who lost to Hobbs, and Mark Finchem, the candidate for secretary of state, have refused to acknowledge their losses.

Navajo, a rural Republican-leaning county, and Coconino, which is staunchly Democratic, voted to certify on Monday. In conservative Mohave and Yavapai counties, supervisors voted to canvass the results despite their own misgivings and several dozen speakers urging them not to.

"Delaying this vote again will only prolong the agony without actually changing anything," said Mohave County Supervisor Hildy Angius, a Republican. The county last week delayed its certification vote to register a protest against voting issues in Maricopa County.

In Cochise County, GOP supervisors abandoned plans to hand count all ballots, which a court said would be illegal, but demanded last week that the secretary of state prove vote-counting machines were legally certified before they would approve the election results. On Monday, they said they wanted to hear again about those concerns.

There are two companies that are accredited by the U.S. Election Assistance Commission to conduct testing and certification of voting equipment, such as the electronic tabulators used in Arizona to read and count ballots.

Conspiracy theories surrounding this process surfaced in early 2021, focused on what appeared to be an outdated accreditation certificate for one of the companies that was posted online. Federal officials investigated and reported that an administrative error had resulted in the agency failing to reissue an updated certificate as the company remained in good standing and underwent audits in 2018 and in early 2021.

Officials also noted federal law dictates the only way a testing company can lose certification is for the commission to revoke it, which did not occur.

Lake has pointed to problems on Election Day in Maricopa County, where printers at some vote centers produced ballots with markings that were too light to be read by on-site tabulators. Lines backed up amid the confusion, and Lake says an unknown number of her supporters may have been dissuaded from voting as a result.

She filed a public records lawsuit last week, demanding the county produce documents shedding light on the issue before voting to certify the election on Monday. Republican Attorney General Mark Brnovich also demanded an explanation ahead of the vote.

The county responded on Sunday, saying nobody was prevented from voting, and 85% of vote centers never had lines longer than 45 minutes. Most vote centers with long lines had others nearby with shorter waits, county officials said.

The response blamed prominent Republicans, including party Chair Kelli Ward, for sowing confusion by telling supporters on Twitter not to place their ballots in a secure box to be tabulated later by more robust machines at county elections headquarters.

The county said that just under 17,000 Election Day ballots were placed in those secure boxes and all were counted. Officials also said the problem was distributed across the county, dispelling claims by Lake that it was concentrated in Republican areas. Election Day ballots went overwhelmingly for Republicans, though only 16% of the 1.56 million votes cast in Maricopa County were made in person on Election Day.

Maricopa County supervisors heard for hours from dozens of people angry about the election, some demanding the county hold a revote, though there is no provision in state law allowing that. Supervisors unanimously approved the canvass.

"This was not a perfect election," said Board of Supervisors Chairman Bill Gates, a Republican. "But it was safe and secure. The votes have been counted accurately."

Meanwhile, Maricopa County Superior Court Judge Randall Warner said he would decide in the next few days whether to allow an election challenge by Abraham Hamadeh, the Republican candidate for Arizona attorney general, to move ahead.

Warner, who was appointed to the court in 2007 by Democratic Gov. Janet Napolitano, spoke after a Monday afternoon hearing. Hamadeh filed the lawsuit earlier this month against his opponent, Democrat Kris Mayes, who holds a 510-vote lead in the race, along with every county recorder in Arizona and Secretary of State Katie Hobbs, who is now governor-elect.

The lawsuit alleges errors and inaccuracies at some voting centers and seeks to have Hamadeh installed as attorney general. A lawyer for Mayes says the suit is premature.

Officials in a northeastern Pennsylvania county where paper shortages caused Election Day ballot problems deadlocked Monday on whether to report official vote tallies to the state, effectively preventing their certification of the results.

Two Democratic members of the Luzerne County Board of Elections and Voter Registration voted to certify, both Republicans voted "no" and the fifth member, Democrat Daniel Schramm, abstained.

Schramm said in a phone interview several hours later that after the meeting he received assurances that few if any voters were unable to cast ballots and that all provisional ballots had been counted. He said he planned to vote in favor of certifying the results at a board meeting set for Wednesday.

"I wanted to research to see exactly how many people were just not allowed to vote. I couldn't find any," Schramm said.

He said elections officials contacted 125 judges of elections from the county's 187 precincts "and they reported nobody being turned away."

A judge extended voting in Luzerne by two hours, to 10 p.m., during the Nov. 8 election after the supplies ran short at some polling places.

Monday is the deadline for counties to certify general election results to the state. In a statement, the Department of State said it was contacting Luzerne officials "to inquire about the board's decision and their intended next steps."

During public comment before the vote on Monday, people attending the elections board meeting in Wilkes-Barre called the election "rife with disenfranchisement," requested the election be redone and called on county election officials to resign.

Alyssa Fusaro, a Republican Luzerne election board member, said she could not vouch that the election had been conducted freely and fairly.

Fusaro said voters were turned away from the polls, machines jammed and ran out of paper, and normal privacy safeguards for voters were not in place.

The board's lawyer, Paula Radick, said failure to certify could bring litigation against the county from the state or from candidates.

Luzerne District Attorney Sam Sanguedolce, a Republican who at the election board's request is investigating why paper ran out at polling places, said in a text Monday that "the investigation is progressing as expected."

Luzerne County in northeastern Pennsylvania is an area that has been trending Republican in recent years. Democratic Gov.-elect Josh Shapiro narrowly won Luzerne, while Democratic U.S. Sen.-elect John Fetterman lost the county by some 10,000 votes.

In Pittsburgh, Allegheny County's Board of Elections voted Monday to certify the election results at 1,311 polling places but did not vote to certify results from 12 polling places where recount petitions have been filed.

A statement from county government said its lawyer was seeking to have those challenges dismissed in the coming days because the people who sought the recounts failed to also post $50 bonds for each ballot box to be recounted.

The Department of State says only "legally valid and properly filed" recount petitions can prompt a county to withhold certification for the office targeted by the recount effort.

"We will review what Allegheny submits to the department and then decide next steps," the Department of State said in an emailed statement.

After three counties refused to record mail-in votes from the May primary, holding up state certification of the overall results, a judge ordered that they be counted.

Information for this article was contributed by Jonathan J. Cooper, Terry Tang, Anita Snow, Christina A. Cassidy and Mark Scolforo of The Associated Press. 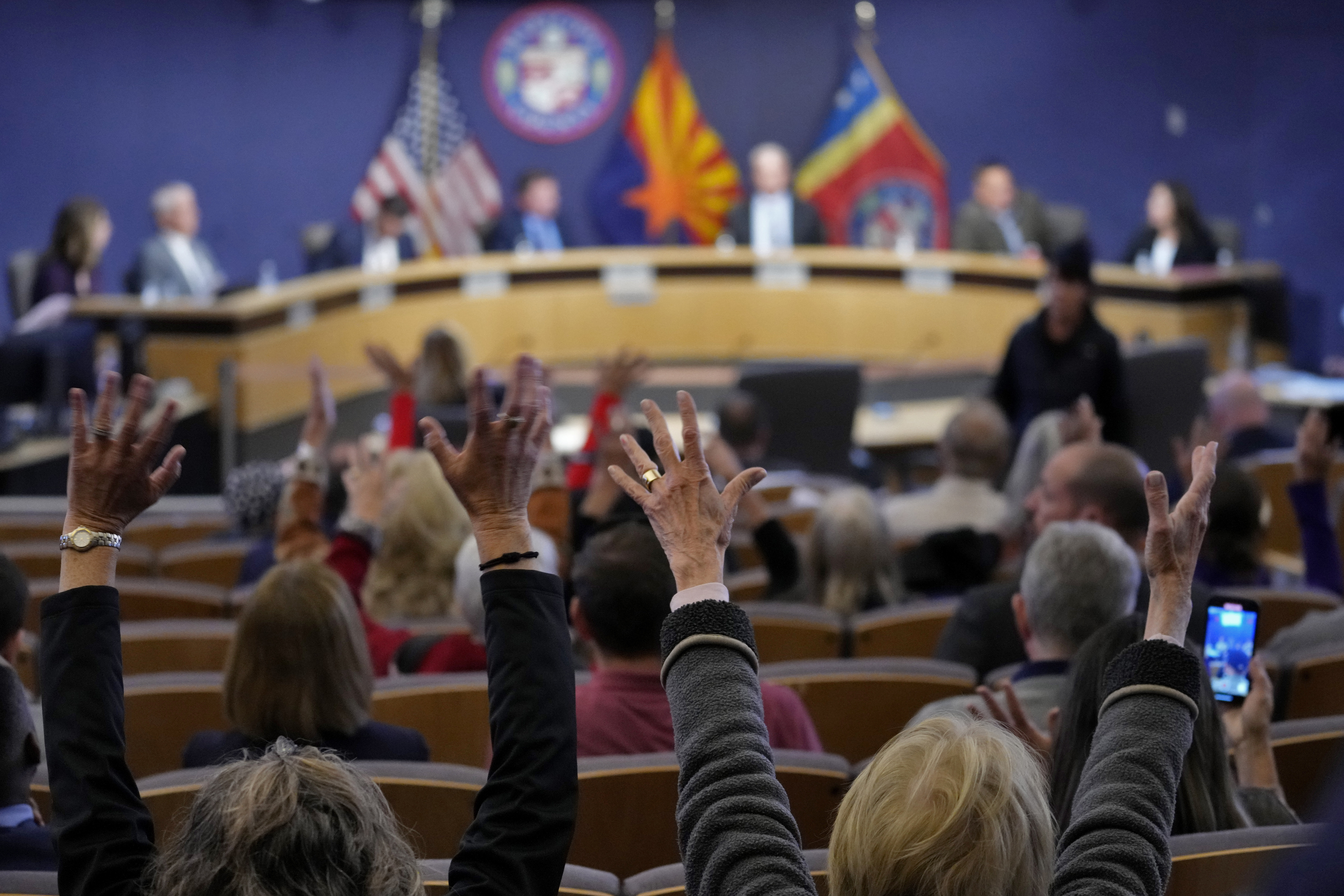 People wave their hands in protest during the Maricopa County Board of Supervisors during their general election canvass meeting, Monday, Nov. 28, 2022, in Phoenix. (AP Photo/Matt York) 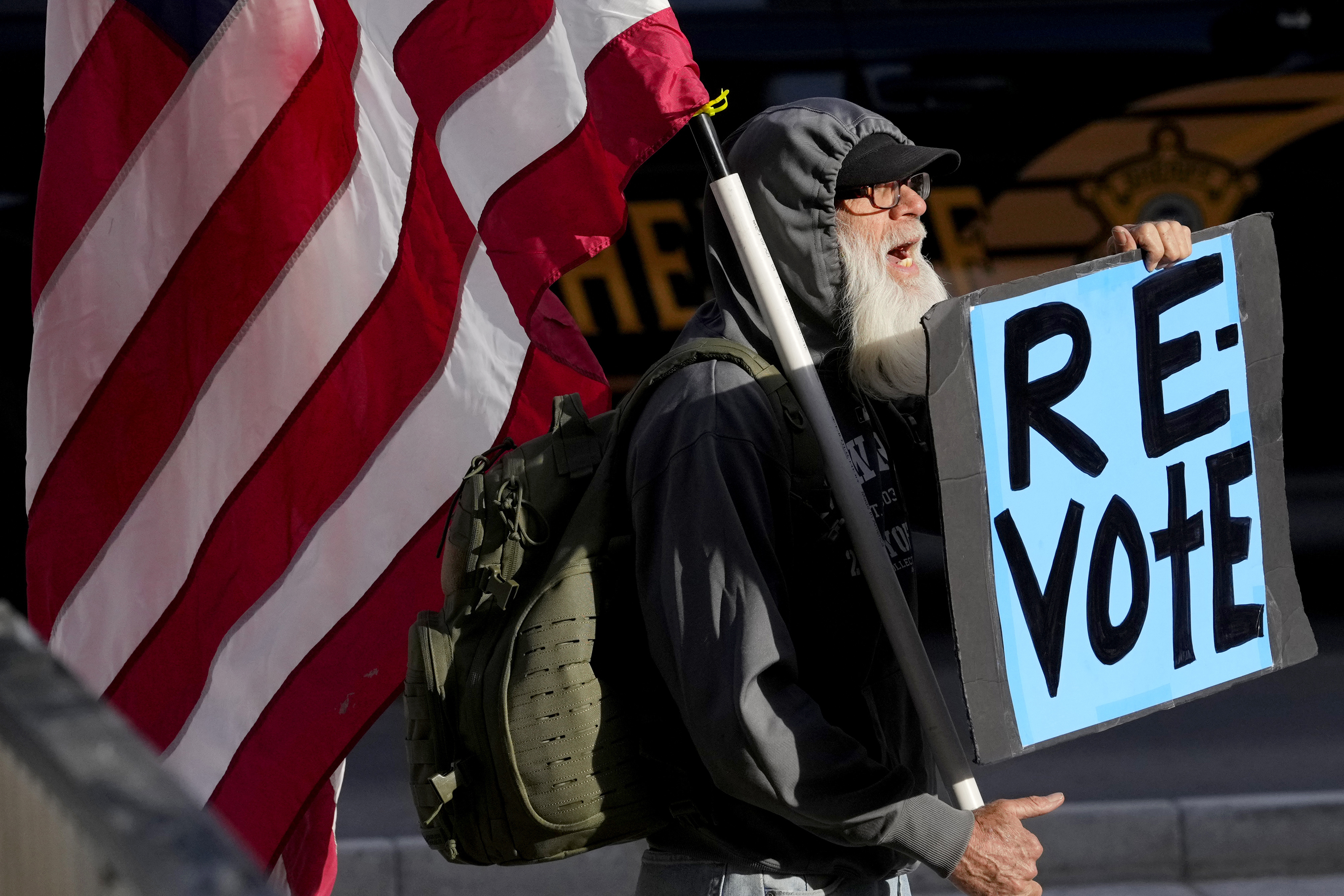 A man protests outside the Maricopa County Board of Supervisors auditorium prior to the board's general election canvass meeting, Monday, Nov. 28, 2022, in Phoenix. (AP Photo/Matt York) 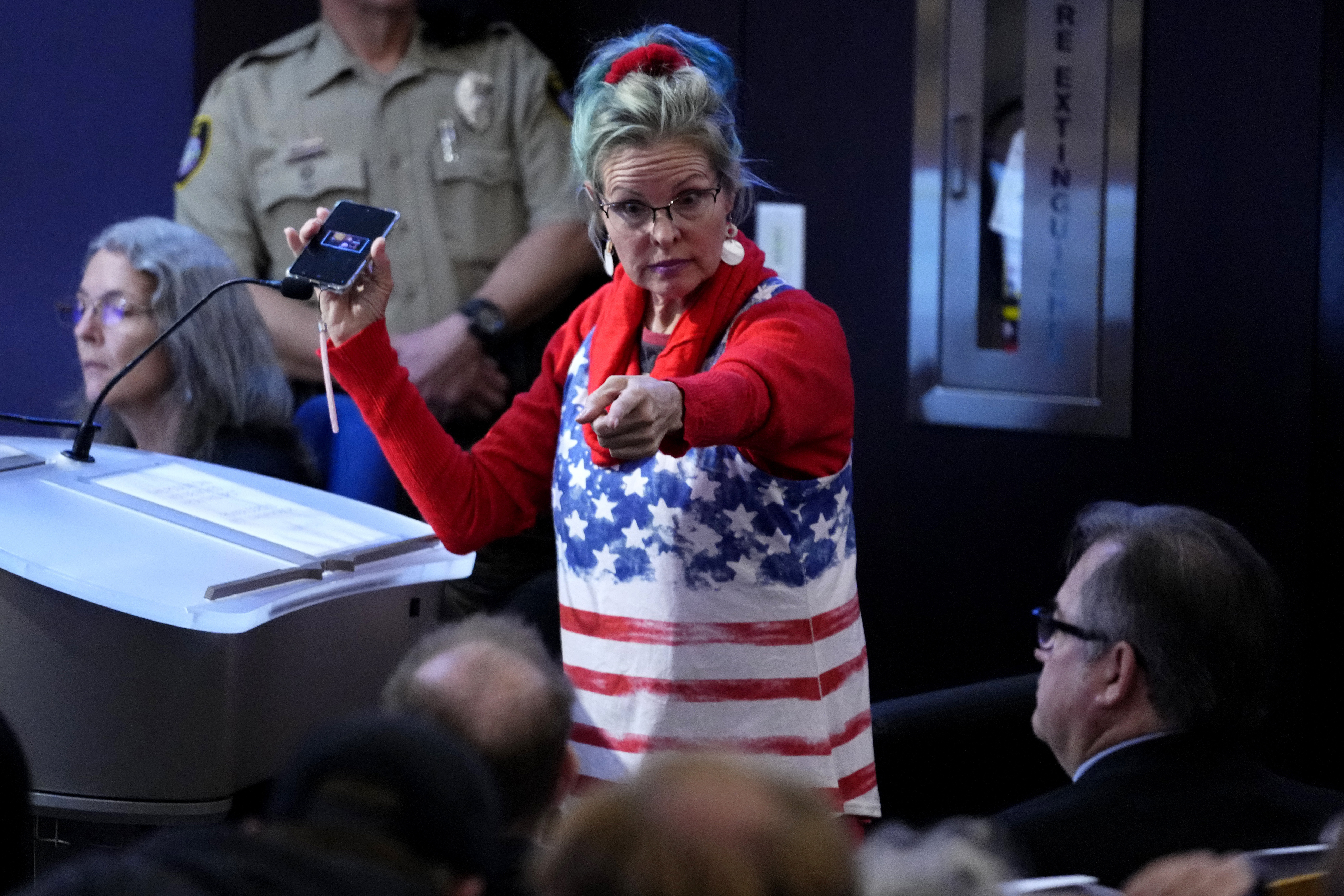 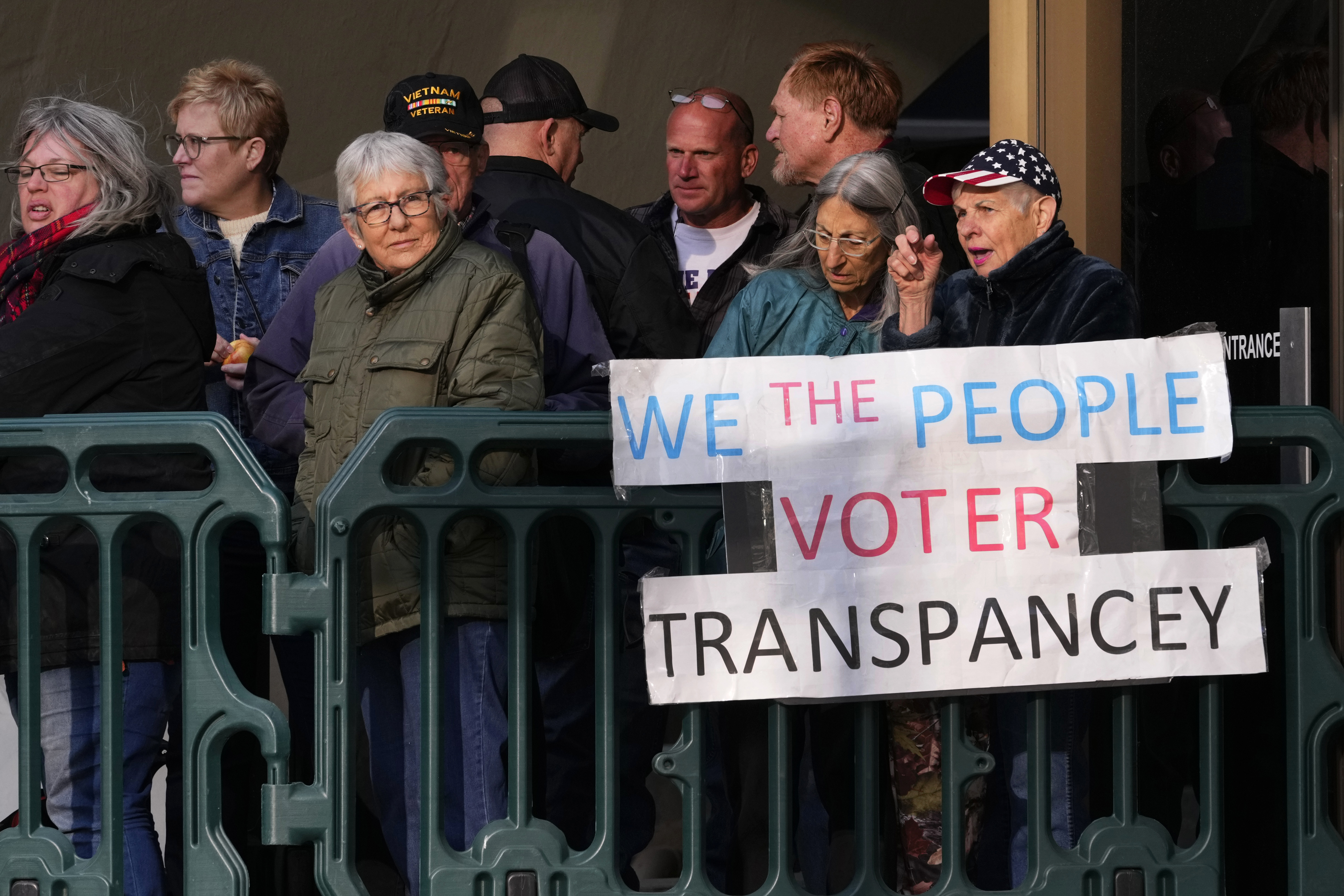 People wait to enter the Maricopa County Board of Supervisors auditorium prior to the board's general election canvass meeting, Monday, Nov. 28, 2022, in Phoenix. (AP Photo/Matt York) 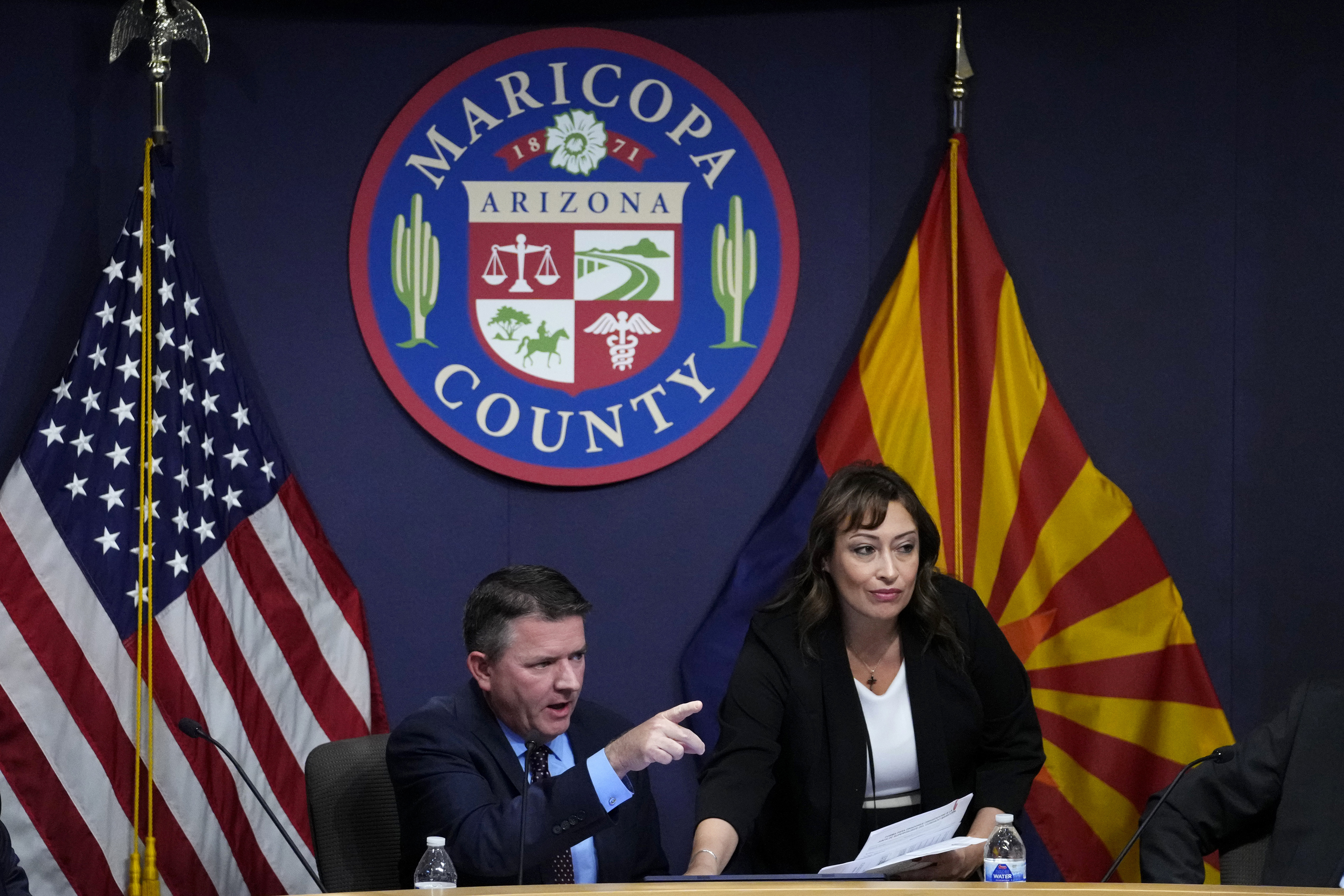 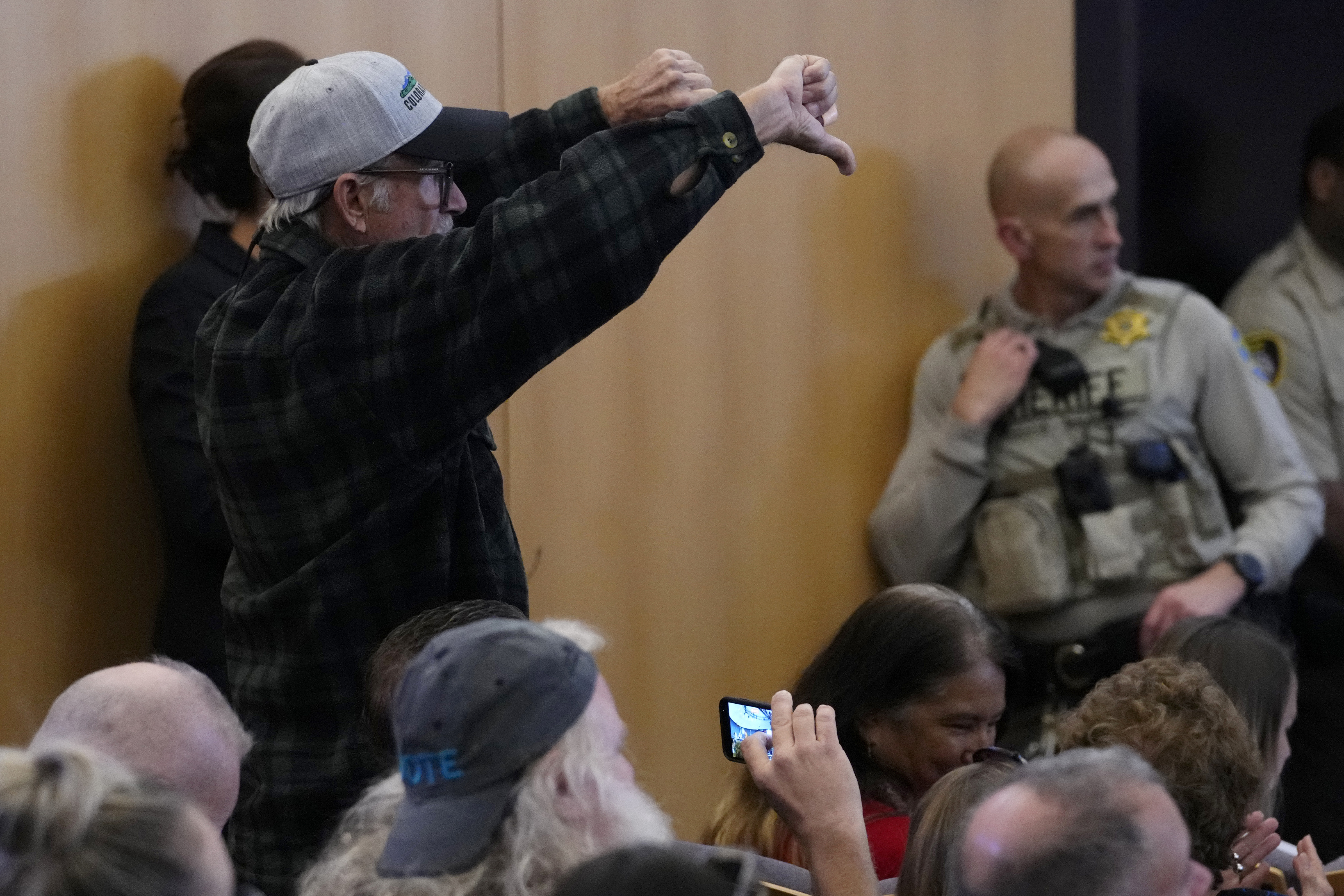 A man gives the thumbs down to the Maricopa County Board of Supervisors during their general election canvass meeting, Monday, Nov. 28, 2022, in Phoenix. (AP Photo/Matt York)