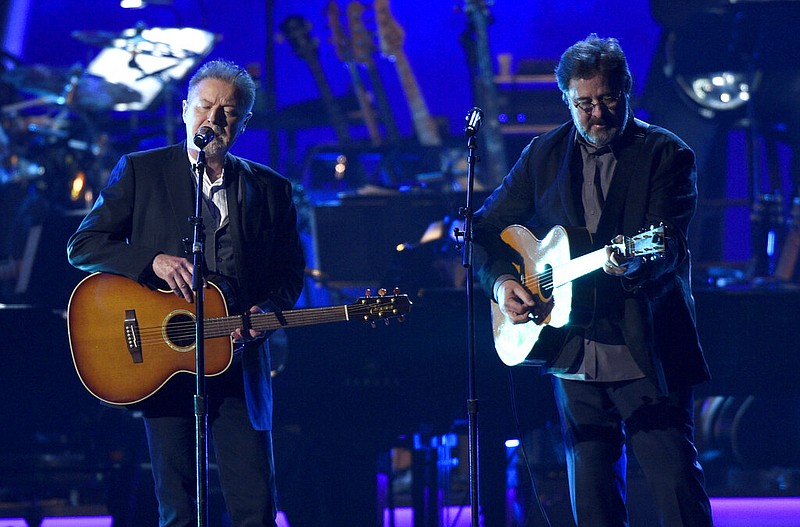 Don Henley (left) and Vince Gill perform "Eagle When She Flies" in Los Angeles in this Feb. 8, 2019 file photo. Henley is a founding member of The Eagles dating back about 50 years, while Gill joined the band in 2017 after the death of Eagles co-founder Glenn Frey. (Chris Pizzello/Invision/AP)

Much water has flowed under many an Arkansas bridge since The Eagles made their Natural State debut in the summer of 1972 as the opening act at Barton Coliseum for the British progressive rock group Yes on that band's "Close to the Edge" tour.

(While at that concert, I noticed members of The Eagles, after finishing their set, took seats in the stands to watch Yes, which seemed a bit unusual, even at the time.)

The Eagles, however, have survived the decades despite numerous comings and goings that have left the group with only one original member, Don Henley, on vocals and drums, but two other members of the core lineup have been along for lengthy tenures: Joe Walsh on guitar and vocals (joined in 1975) and Timothy B. Schmit, bass and vocals (1977). When Henley's co-founder, Glenn Frey, died in 2016, some thought the band was finished, but instead country musician Vince Gill became a full member a year later, and Glenn Frey's son, Deacon Frey, began playing at times in the band, also in 2017.

As advertised, Sunday night's Simmons Bank Arena show was a two-faceted performance: the band's famed album, "Hotel California," in its entirety, followed by the group's (and some of the members') greatest hits. Augmenting the band were a pair of impressive outfits, the Arkansas Symphony Orchestra and Darius Nelson & Friends, a large local choir.

The "Hotel California" album portion of the show was nicely presented, especially the songs "The Last Resort" and "Pretty Maids All in a Row," thanks to Joe Walsh's guitar wizardry and plaintive vocals. After an intermission, out came the band's greatest hits, with their first hit, "Take It Easy," getting fine vocal delivery by guest artist Deacon Frey, singing a song his dad had co-wrote with Jackson Browne.

Hit after hit kept coming, with the highlights being "Peaceful Easy Feeling," "Lyin' Eyes" Henley's "The Boys of Summer" and the songs where Walsh's guitar work was featured: "In the City," "Life's Been Good," "Funk #49" and "Rocky Mountain Way."

The band seemed to spare no expense on its lighting, imagery and camera work (which frequently focused on close-up views of the guitar playing that was on view by Walsh, Gill, Henley and Steuart Smith, a touring member of the band since 2001).

As the show wound down, Henley announced it was the band's last show of 2022, and that the band appreciated their fans' loyalty over the course of 50 years.

"The members aren't the same, but the songs are," he said.

Or then again, maybe the songs are even better. I think so.