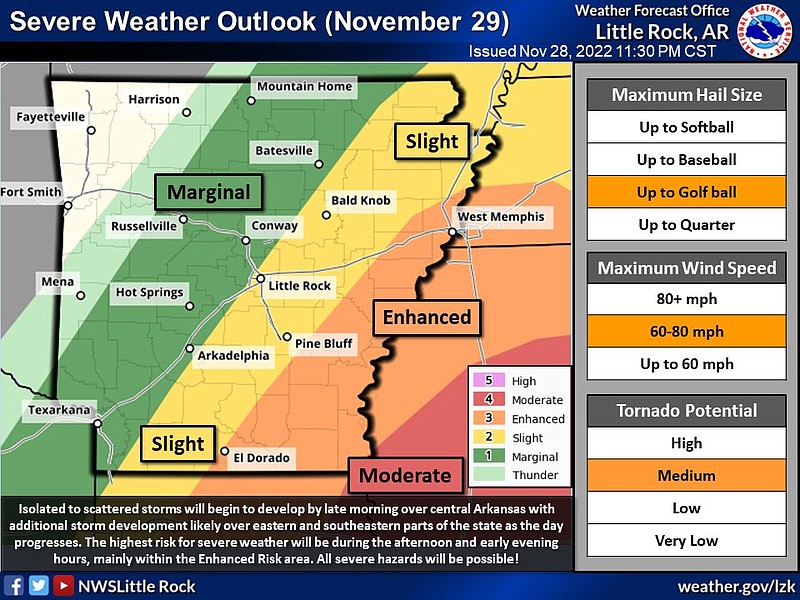 Numerous tornados are expected, and a few intense tornadoes are likely, according to the weather service.

Also likely is scattered large hail and isolated very large hail -- 2 inches in diameter -- along with scattered damaging wind gusts of up to 70 miles per hour, the weather service said.

11:54 a.m. Severe weather and tornadoes forecasted for parts of state

Severe weather and a "good chance" of tornadoes is forecasted Tuesday afternoon for large parts of Arkansas, according to meteorologist Travis Shelton with the National Weather Service.

A Hazardous Weather Outlook report from the weather service in North Little Rock notes that the state could see scattered to widespread thunderstorms, including strong to severe storms. Reportedly, the storms will most likely hit portions of central, eastern, and southeastern Arkansas Tuesday afternoon and into early Wednesday.

All severe hazards will be possible, including damaging winds, large hail, and even a few tornadoes, the weather service said.

Eastern and southeast parts of the state are at a higher risk for severe weather, according to a tweet the weather service posted around 10 a.m.Tuesday.

An increased chance of large hail, greater than one inch, is predicted over the southeast part of Arkansas, Shelton said.

He also said there’s a good chance tornadoes rated at EF2 or greater in the southeastern portions of the state, with wind gusts of 60 to 80 mph predicted for the eastern and southeastern parts of Arkansas.

The meteorologist encouraged people to take precautions, too, even if they don't live in an area that has a tornado threat.