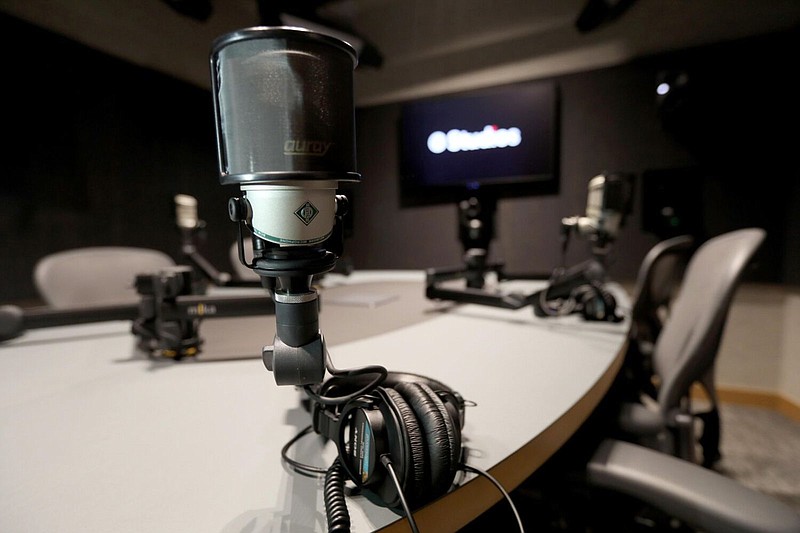 A washed-up radio host aims to clear his name by uncovering the truth behind the disappearance of three Muslim American teenagers. But as his investigation unfolds, the broadcaster confronts his own biases and discovers a monster that is even more nefarious than he imagined.

The 12-episode podcast — which debuted last week — marks the first audio-only series for Peele, who is best known for his big-screen horror movies such as "Get Out," "Us" and "Nope."

"Your imagination's darkest, scariest nightmare is much worse than any monster we can visualize and put in front of you," Peele said. "So with audio horror, we are fully tapping into that idea and leveraging the imaginations of the listeners against them."

"Quiet Part Loud" also represents a test of Spotify's strategy of leaning heavily into its high-profile podcast partnerships with prominent filmmakers as the Swedish music-streaming giant looks to diversify its core business and draw more subscribers to its platform.

"We pick the things that we really know we can deliver for those high-end creators and bring their podcast to market in a way that breaks through the clutter," said Julie McNamara, head of talk studios and a vice president at Spotify.

While Spotify is known for Q&A and topical discussion podcasts like "Call Her Daddy" and "Armchair Expert With Dax Shepard," it is also investing heavily in ambitious narrative podcasts like "Quiet Part Loud" with elaborate storylines and characters voiced by popular actors.

In "Quiet Part Loud," each of the roughly 20-minute episodes takes listeners on an audio journey as they travel around New York to learn more about a terrifying monster that travels through the airwaves and is fueled by hatred. The idea, which Peele first envisioned as a TV show or movie, was tailored to become an exclusive Spotify podcast.

"It's pretty real-world and pretty terrifying at the same time, so it definitely has the DNA of the best of Jordan Peele's content," McNamara said.

Spotify agreed to pay Peele's company, Monkeypaw Productions, a producer fee of $1.35 million for Season 1 and gave the podcast a $550,000 budget, according to a producer services agreement. Spotify declined to comment on the financial terms of the deal.

"There is a big audience of horror fans, Monkeypaw fans out there who are probably unfamiliar with the medium, and one thing we really wanted to do was reach out with a show that was approachable enough that it could make people fall in love with scripted podcasts, even if this was their first taste of it," said Monkeypaw's Geoff Foster, a producer on "Quiet Part Loud."

Many industry observers believe scripted fictional audio podcasts have yet to have their breakthrough moment as true-crime podcast "Serial" did.

Spotify has additional scripted projects in the works, including with J.J. Abrams' Bad Robot, as well as a second season of "Batman Unburied."

Next year, Spotify will also release the scripted podcast "Harley Quinn and the Joker: Sound Mind," starring Christina Ricci, as part of its partnership with DC and Warner Bros. It also has signed a multiyear podcast deal with "Avengers: Endgame" directors Anthony and Joe Russo.

The push into scripted podcasts comes three years after Spotify began heavily investing in digital radio, buying several podcast-related companies. The idea was to encourage its 456 million monthly active users to spend more time on the platform and to reduce the company's dependence on music as the main draw for listeners.

The strategy has relied heavily on creating original and exclusive podcasts from its in-house studios and through partnerships with celebrities.

Since the summer, Spotify has launched "Archetypes," hosted by Meghan, Duchess of Sussex, and "Kim Kardashian's "The System: The Case of Kevin Keith," which discusses the shortfalls of the U.S. justice system. Both podcasts performed well in the U.S. after they premiered, with "Archetypes" remaining the No. 1 society and culture podcast on Spotify in the U.S. for at least five weeks.

On Nov. 17, Spotify announced a multiyear exclusive licensing agreement with podcasting internet personality Emma Chamberlain, who has 11.9 million subscribers on her YouTube channel.

"The goal is breaking through the clutter," McNamara said. "So we look at what can do that, and one prong of that is if you have a notable host, that immediately draws in interest and press and curiosity."

Spotify also has made cuts in the audio space. Last month, the company scrapped 11 podcasts and laid off nearly 40 people, including staff members at Gimlet and Parcast studios.

"If you're a strategic division of a company, you're going to continue to evaluate portfolios and strategy to make sure that you are doing what is necessary to be a winner in the space," McNamara said.

One of the company's most popular exclusive podcasts remains "The Joe Rogan Experience," which generated controversy earlier this year when Neil Young and other musicians accused the program of spreading covid-19 misinformation and criticized Rogan's past use of the N-word.

Spotify defended its content moderation policies and managed to weather the storm and calls for a boycott.

Despite a deteriorating climate that has brought steep layoffs to the tech sector, McNamara said that podcast consumption continues to grow, adding, "We are continuing to invest both in terms of needed head count and financially, so there's not a pullback on our investment."

And podcasts continue to attract creatives like Peele, who are drawn to the possibilities of working in a new medium. Horror is especially suited to audio, he says.

"For starters, it's so intimate," Peele said. "You put earbuds in and you are literally inside someone's head, which means you have them captive. They are ripe for the taking to get scared — which I love."

He added: "If people have to turn it off before they fall asleep because they are worried about nightmares, then we've done something right and I'll be happy."