The Uber-ization of US trucking is only speeding up 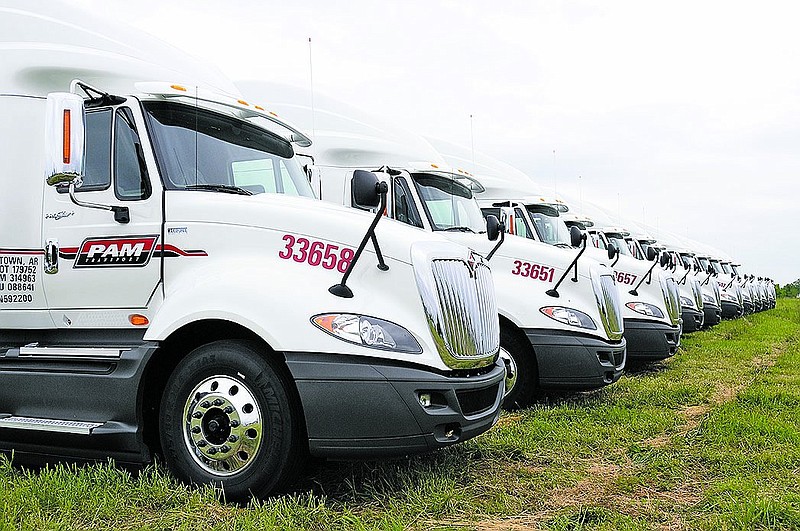 Some of the trucks that Diamond International prepared for P.A.M. Transportation Services Inc. are shown in this undated file photo. (NWA Democrat-Gazette/Anthony Reyes)

U.S. trucking is entering a tumultuous period that will likely reshape the $875 billion industry.

Shipping rates that spiked during disruptions caused by the covid-19 pandemic have plummeted — some are now calling it a "freight recession" — as inventory gluts across the United States lowered demand.

That has placed the sector at a disadvantage during annual contract negotiations now in full swing, but also means retailers and other customers will benefit from lower transportation costs. There's also a digital shakeout among the brokers who match trucking companies with loads that need to be shipped.

Silicon Valley entered the fray a few years ago and digitized what had been a transaction done with phone calls and paper. Large and established brokers have also bolstered their technology, leaving the 17,000 smaller firms that haven't evolved vulnerable.

"There's going to be consolidation," said Brett Suma, CEO of Loadsmith, a startup founded in 2019 that's projected to generate sales of $130 million this year and turn a profit. "The haves of the technology are going to grow. … The have-nots of the technology will be consumed."

Meanwhile, uncertainty reigns. Retailers still have too much inventory, a result of consumers pulling back from apparel and other goods after splurging last year. The U.S. might also be heading into a recession, which puts more pressure on spot market truckload rates that are down 40% from a year ago, according to KeyBanc Capital Markets.

Contracted freight tonnage that's seasonally adjusted fell 2.3% in October from September, the largest decline since the beginning of the pandemic, according to the American Trucking Associations. Contract freight rose 2.8% in October when compared with a year ago, the lowest gain since April, the trade group said.

The brokerage battlefield is pitting legacy brokers, such as C.H. Robinson Worldwide Inc. and RXO Inc. that are expanding automated systems, against digitally native newcomers, such as Uber Technologies Inc.'s freight unit and Convoy Inc.

The race to become the leading digital platform includes Werner's $113 million acquisition this month of ReedTMS Logistics, a Tampa, Florida-based freight broker with $372 million in annual revenue. That came after Uber Freight's purchase of Transplace last year for $2.25 billion.

Information for this article was contributed by Richard Clough of Bloomberg News (TNS).