TELEVISION: ‘Wednesday’ is the ‘Addams’ spinoff we deserve 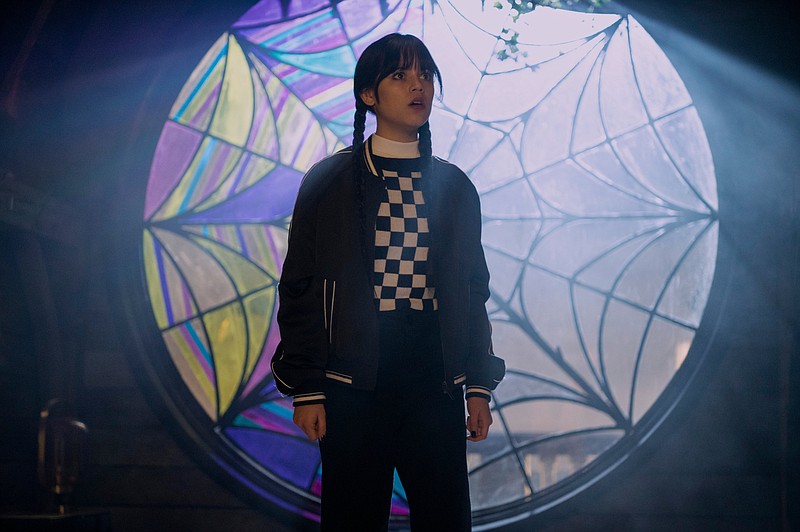 Jenna Ortega is Wednesday Addams in “Wednesday,” now streaming on Netflix. Hers is a performance not to be missed. (Vlad Cioplea/Netflix/TNS)

The eight-part series from director Burton and writers Alfred Gough and Miles Millar has caskets full of fun when daddy's "little viper," Wednesday Addams (Jenna Ortega), is expelled from Nancy Reagan High, her eighth school in five years. All she did was release piranhas into a swimming pool full of jocks who'd bullied her younger brother, Pugsley.

Nevermore Academy is the alma mater of her mother, Morticia (Catherine Zeta-Jones), and father, Gomez (Luis Guzman). Its curriculum is designed for outcasts, creeps and monsters, and the student body is filled with cliques of vampires, werewolves and sirens. But even they're freaked out by Wednesday's cadaver-white skin and all-black uniform. "Wednesday always looks half-dead," explains Gomez. "Please excuse Wednesday. She's allergic to color," adds Morticia. The school's suspiciously cheerful Principal Weems (Gwendoline Christie) has no intention of going easy on Wednesday.

Ortega kills as the gifted, nihilistic teen who'd rather hang out in a crypt than a club. She embodies Wednesday with her flat affectation and utter disdain for her peers. Her spasmodic, zombie-like moves at the school dance to the tune of the Cramps' "Goo Goo Muck" — with a deadly straight face, no less — create one of the top television moments of the year.

The blackhearted heroine is sadistic, fearless and full of fantastically sardonic one-liners. When describing how she's plagued by visions, mommy's little storm cloud says, "They come on without warning and feel like electroshock therapy, but without the satisfying afterburn." She doesn't have an Instagram or TikTok account because she finds "social media to be a soul-sucking void of meaningless affirmation." And when her hideously perky new roomie Enid (Emma Myers) gives her a tour of the school's social scene, Wednesday makes it clear that she's not interested in "tribal adolescent cliches." (You will love Myers' performance and character by the time the series is done.) Wednesday puts her inherent distrust of humankind to use when a mysterious creature with ties to the school starts killing off students and townsfolk. Like a Gothic Nancy Drew, she relies on her powers of deduction — and the occasional torture session — to solve the mystery.

Christina Ricci, who played Wednesday in the 1991 film "The Addams Family" and its 1993 sequel, "Addams Family Values," is the academy's one "normie" teacher, Ms. Thornhill. She doesn't have morphing skills or powers like the others. Her passion for teaching botany is what brought her to the school. But why is she really there? Gimmicky callbacks to the films and the 1964 TV series are rare and strategically deployed in this streaming iteration of the franchise. Two snaps of the finger unlock the door to a secret society's lair, and Lurch's catchphrase, "You rang?," only surfaces once and with perfect timing.

Thing, the disembodied hand that's led a confined existence in past "Addams Family" productions, moves around freely now, thanks to the miracle of CGI. It's Watson to Wednesday's Sherlock, and Thing's expressions of shame, alarm and dejection are a full-bodied performance. Wednesday interrogates Thing when she discovers it hiding in her dorm room on the first day of school. "Mother and Father sent you to spy on me, didn't they?" He signals "no" with the wag of a digit. "I'm not above breaking a few fingers," she warns. Thing quakes, then quickly explains in sign language that it's there for her own good. "Oh, Thing, you poor, naive appendage," she says mockingly.

Burton's sensibilities and style are all over this irresistibly quirky, sardonic whodunit. Nevermore Academy is a beautifully ghoulish place replete with gargoyles and spires, while the small historic town of Jericho outside draws tourists in with a cheesy re-creation of a Pilgrim village. The mix of witch-burning artifacts and kitsch fudge stands is a Burton playground.

There's always a danger when messing with a beloved pop culture institution like "The Addams Family," but "Wednesday" is brilliant on every level. Its namesake doesn't have to worry about her reputation being sullied.