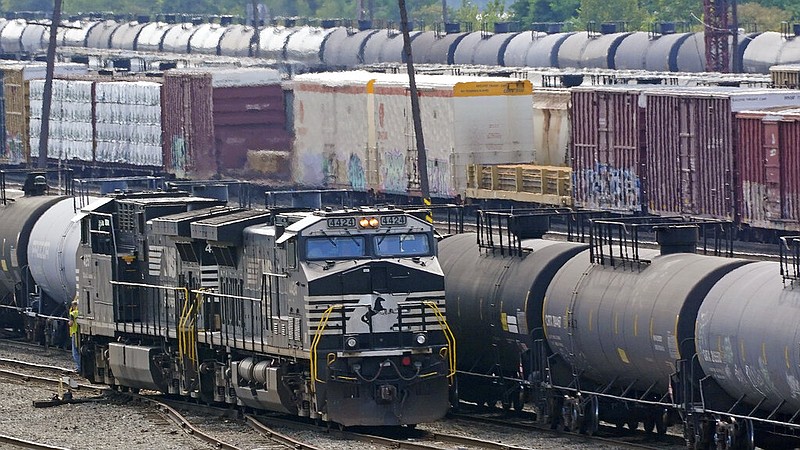 FILE - Norfolk Southern locomotives work in the in the Conway Terminal in Conway, Pa., Sept. 15, 2022. President Joe Biden's call for Congress to intervene in the railroad contract dispute undercuts the unions' efforts to address workers' quality of life concerns, but businesses stress that it is crucial to avoid a strike that would devastate the economy. (AP Photo/Gene J. Puskar, File)

Averting a rail strike has become the top issue for Congress, with House Speaker Nancy Pelosi vowing to take up legislation to force a deal early today.

With a Dec. 9 negotiations deadline drawing near, President Joe Biden on Monday called on Congress to immediately pass legislation to impose a union contract negotiated earlier this year to avert a strike.

During a meeting with congressional leaders Tuesday morning, Biden acknowledged that it was "not an easy call" for Congress to intervene but said it was necessary because the economy was "at risk" in the labor dispute.

"From a timing standpoint what we need to do right now is avoid the strike," Pelosi, D-Calif., said after the meeting. "We will act tomorrow morning, Wednesday, send the bill over to the Senate -- hopefully with the biggest, strongest bipartisan vote. It is a compromise, and it is what we must do."

Sen. Mitch McConnell, R-Ky., the minority leader, told reporters after the meeting that "we're going to need to pass a bill to avert the strike," signaling Republican support.

While rail carriers and other industries praised the proposed legislation, discontent and anger quickly surfaced from rank-and-file rail workers from four unions that voted down the contract.

"It is not enough to 'share workers' concerns,'" the Brotherhood of Maintenance of Way Employes Division union said in a statement. "A call to Congress to act immediately to pass legislation that adopts tentative agreements that exclude paid sick leave ignores the railroad workers' concerns."

The union is one of the four that rejected their deal.

Biden's request that Congress step in underscores the recognition that a rail strike could have a devastating effect on the fragile economic recovery after the coronavirus pandemic. Frozen train lines would snap supply chains for commodities such as lumber, coal and chemicals, and delay deliveries of automobiles and other consumer goods, driving up prices even further.

The U.S. economy stands to lose $2 billion a day if rail workers strike, according to the Association of American Railroads.

Democratic leaders have little wiggle room in the narrowly divided House and Senate if they hope to deliver on Biden's request. In the Senate, particularly, Democrats need to band together while still soliciting 10 GOP votes to act -- and more might be necessary in the event of defections.

In public tweets and hallway interviews, Sen. Bernie Sanders, I-Vt., blasted the contract, because it did not include sick leave. In recent days, Sanders has pointed to the rail industry's stock buybacks to make the case it can afford to provide additional benefits to workers.

Separately, Sen. Marco Rubio, R-Fla., aired early GOP concerns Tuesday, tweeting that rail companies and workers should "go back" and "negotiate a deal." If Congress does have to act, however, Rubio said he would not cast his vote in favor of a proposal that "doesn't have the support of the rail workers."

Ian Jefferies, president and CEO of the Association of American Railroads, said on a press call Tuesday that Biden's stance to avert a strike through Congress is critical.

"We recognize that we are in a finite time table with an increasingly shorter timeline," Jefferies said.

The Brotherhood of Maintenance of Way Employes Division, representing some 23,000 rail workers, meanwhile, blasted Biden's call for action saying it denied railroad workers "their right to strike," and the "benefits they would likely obtain" if they were not denied that right.

"It will worsen supply chain issues and further sicken, infuriate, and disenfranchise Railroad Workers as they continue shouldering the burdens of the railroads' mismanagement," the union said in its statement.

Union members had hoped to get paid sick days and adjustments to an attendance policy that punishes them for taking time off to address emergencies.

After Biden's announcement Monday, many rail workers said that Biden -- who has promised to be the "most pro-union" president -- had let them down by urging Congress to push a deal they rejected.

"The 'most labor-friendly president in history' has proven that he and the Democratic Party are not the friends of labor they have touted themselves to be," said Gabe Christenson, a conductor and co-chairman of the Railroad Workers United coalition that includes workers from all of the rail unions.

"These wolves in sheep's clothing have for decades been in bed with corporate America and have allowed them to continue chipping away at the American middle class and organized labor," Christenson said.

Rail workers currently do not receive any paid sick days. Rail carriers have said that their employees can take time off when they're sick by using paid vacation days.

"I feel that I put my heart out to get Biden elected in 2020 [based on his promise to be pro-labor], and now he's undermining us by not helping us with sick time," said Andy Quisenberry, a 17-year track foreman in Bowling Green, Ky., who voted down the deal.

"The sick time is pennies on the dollar, and we got corporations making billions of dollar in profits that we helped them make. It's a small token to the employees," Quisenberry said.

The last time that Congress intervened to settle a nationwide rail dispute was in 1992, when the International Association of Machinists launched a nationwide strike. Congress stepped in to stop the strike two days later, passing legislation that was signed by President George H.W. Bush the same day.

Though many union members are upset by the prospect of congressional intervention, some union leaders may quietly prefer that intervention to come in December, rather than in January, when the House comes under Republican control and may be more likely to back the skimpier deal.

The contract voted down by several rail unions earlier this year would raise wages by nearly 25% between 2020, when the last contract expired, and 2024. But it has proved contentious among rail workers who argue that it does not go far enough to resolve what they say are punishing schedules that upend their personal lives and their health.

The railroad industry, meanwhile, immediately threw its support behind Biden's call for legislation. The railroads that include BNSF, Union Pacific, CSX, Kansas City Southern and Norfolk Southern have refused to consider adding sick time because they didn't want to spend any more on the labor deals than they agreed to in September.

They have also argued that rail unions have agreed over the decades to forgo paid sick time in favor of higher wages and stronger short-term disability benefits.

"No one benefits from a rail work stoppage -- not our customers, not rail employees and not the American economy," Jefferies, of the Association of American Railroads, said. "Now is the appropriate time for Congress to pass legislation."

Information for this article was contributed by Lauren Kaori Gurley and Tony Romm of The Washington Post; Michael Shear of The New York Times; and Josh Funk of The Associated Press.