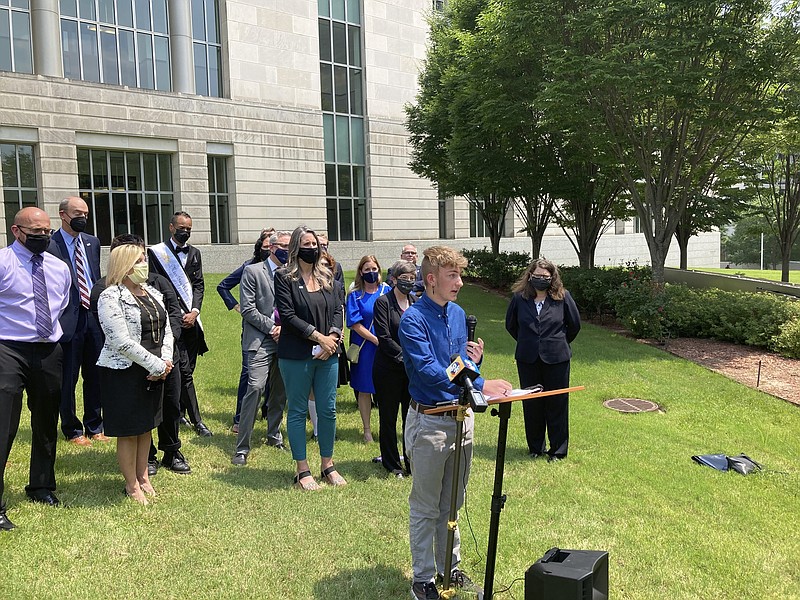 Dylan Brandt speaks at a news conference outside the federal courthouse July 21, 2021, in Little Rock. Brandt, a teenager, is among several transgender youth and families who are plaintiffs challenging a state law banning gender confirming care for trans minors. The nation’s first trial over a state’s ban on gender-confirming care for children began Monday, Oct. 17 in Arkansas, the latest fight over restrictions on transgender youth championed by Republican leaders and widely condemned by medical experts. (AP Photo/Andrew DeMillo, File)

Tuesday's session of a bench trial concerning the state's first-in-the-nation ban on gender-affirming health care concluded after just over a half day following testimony from a sociologist and a plastic surgeon called by attorneys defending the law.

Mark Regnerus, a sociologist with the University of Texas at Austin, testified remotely from Europe where he is attending a conference. During his testimony, U.S. District Judge James M. Moody Jr. appeared to struggle at times to understand the relevance of his testimony. Regnerus said he had reviewed numerous works by other researchers who he said had observed a bias among providers treating transgender patients toward affirmation rather than treatment of underlying mental or emotional conditions. He testified that researchers had faced pressure to agree with treatment models based on affirmation and said a number of groups exist that "don't feel like they have the freedom to object."

"There is significant concern that there's a rush to treat minors," Regnerus said, but when asked what research he had done in the area, he continued to point to the work of others that had fallen under heavy criticism.

"All I'm hearing is some people are forming opinions which are causing debate," Moody said at one point. "All he's telling me is there was a report and there was back flow and that shows there was criticism ... What does it have to do with the decision I have to make?"

Act 626 of 2021 -- the Save Adolescents From Experimentation Act -- was passed in March 2021 after both the state House and Senate voted by large margins to override a veto by Gov. Asa Hutchinson. It was challenged the following month in a suit filed by the American Civil Liberties Union, and three months later, a week before the law was set to go into effect, Moody issued a temporary injunction blocking it from being enforced while the matter is in court.

A three-judge panel on the 8th U.S. Circuit Court of Appeals upheld Moody's injunction in August. The court ruled just over a week ago that it would not take up the matter for reconsideration by the full 8th Circuit, denying an appeal motion of Moody's ruling filed by Attorney General Leslie Rutledge's office. The lawsuit, which was filed by the American Civil Liberties Union on behalf of the four minor plaintiffs, their parents and two physicians, contends the law violates the equal protection and due process clauses of the 14th Amendment and free speech protections under the First Amendment.

Regnerus' testimony was intended to cast doubt on the motivations of health care providers and organizations promoting gender-affirming care for minors by demonstrating a bias toward hormone therapy and surgical interventions and away from mental health treatment, but Regnerus failed to show that he had done any research in the field outside of one paper discredited by a federal judge in a 2014 adoption case in Michigan.

Moody repeatedly tried to elicit testimony from Regnerus indicative of research he had performed, but the witness continued to relate his opinions of research done by others and to point out the controversy those research findings had inspired.

Dylan Jacobs, an attorney with Rutledge's office, said Regnerus was attempting to discredit a claimed medical consensus among professional health care associations that he said does not exist but claimed is being covered up by exerting pressure on medical professionals who don't agree with those organizations.

"It's not the medical side of the consensus but what else is influencing that," Jacobs said. "Is it coming from outside of the medical field? What are the sociological factors surrounding the debate?"

"I'm not sure who's arguing over it has anything to do with the constitutionality of this particular statute," Moody said. "I know you say they think there's consensus and it's apparent to me that it's not. There's a lot of people who have views about all of this and they're not all the same, and if he's there to tell me that, I get it, but I'm not sure what we're doing here."

ACLU attorney Daniel Richardson asked Regnerus about his 2012 study, entitled "New Family Structure Study," which Richardson said was discredited in a 2014 federal trial in Michigan over the constitutionality of a same-sex marriage ban when the judge in that trial found Regnerus to be "entirely unbelievable." Regnerus testified in that trial on behalf of the state, which opposed the marriage of a gay couple who had adopted children.

"The Court finds Regnerus's testimony entirely unbelievable and not worthy of serious consideration," U.S. District Judge Bernard Friedman in Michigan's Eastern District wrote in a 2014 opinion on that case. "While Regnerus maintained that the funding source did not affect his impartiality as a researcher, the Court finds this testimony unbelievable. The funder clearly wanted a certain result, and Regnerus obliged."

Richardson asked about a 2017 conference Regnerus attended in which the Alliance Defending Freedom -- a faith-based 501(c)(3) tax-exempt organization based in Arizona that opposes abortion rights, same-sex marriage, transgender health care and other social issues -- cast a net seeking expert witnesses to testify in trials challenging the constitutionality of conservative legislation banning such rights.

"I have a vague recollection of the meeting," Regnerus said. "It sounds like something ADF would do."

Also in attendance, Richardson said, were Dr. Paul Hruz, a pediatric endocrinologist in St. Louis who specializes in the treatment of pediatric diabetes, and Dr. Patrick Lappert, a cosmetic surgeon who practices in Decatur, Ala., and operates a skin care clinic there. Lappert testified for the state Tuesday following Regnerus' testimony and Hruz is scheduled to testify on Thursday.

Lappert testified that he has treated only one transgender patient suffering from gender dysphoria. That one patient, he said, was in the process of detransitioning. As for procedures to generally treat gender dysphoria, Lappert said, "I don't do that."

Lappert testified to the differences between reconstructive surgery and aesthetic surgery and the risks associated with each. He characterized gender reassignment surgeries as aesthetic, much like breast augmentation or rhinoplasty for purely cosmetic reasons.

"What all of these surgeries have in common is the patient is seeking happiness," Lappert said. "This is a real red flag for plastic surgeons."

He said one of the major side affects of gender reassignment surgeries is the risk to normal human function such as childbearing, breastfeeding or the ability to procreate.

Lappert acknowledged that one of the topics at the 2017 ADF conference was the difficulty in getting experts to testify in favor of prohibitions on transgender health care and that both he and Hruz were in attendance.

Testimony continues this morning with the state calling Laura Perry, an author and motivational speaker based in Oklahoma who lived as a man for nine years before detransitioning in 2016.