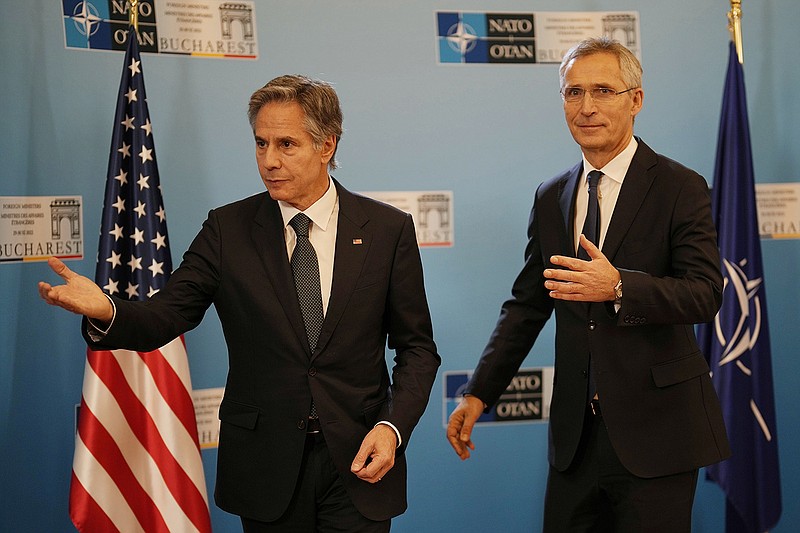 BUCHAREST, Romania -- NATO doubled down Tuesday on its commitment to one day include Ukraine, a pledge that some officials and analysts believe helped prompt Russia's invasion this year. The world's largest security alliance also pledged to send more aid to Ukrainian forces locked in battle with Russian troops.

He highlighted that North Macedonia and Montenegro had recently joined NATO, and said Russian President Vladimir Putin "will get Finland and Sweden as NATO members" soon. The Nordic neighbors applied for membership in April, concerned that Russia might target them next.

"Russia does not have a veto" on countries joining, Stoltenberg said. "We stand by that, too, on membership for Ukraine."

Stoltenberg said NATO expansion would not be hindered.

"President Putin cannot deny sovereign nations to make their own sovereign decisions that are not a threat to Russia," the former Norwegian prime minister said. "I think what he's afraid of is democracy and freedom, and that's the main challenge for him."

Ukraine applied Sept. 30 for "accelerated accession" to NATO but will not join anytime soon. With the Crimean Peninsula annexed, and Russian troops and pro-Moscow separatists holding parts of the south and east, it's unclear what Ukraine's borders would even look like.

Many of NATO's 30 members believe the focus now must solely be on defeating Russia, and Stoltenberg stressed that any attempt to move ahead on membership could divide them.

"We are in the midst of a war and therefore we should do nothing that can undermine the unity of allies to provide military, humanitarian, financial support to Ukraine, because we must prevent President Putin from winning," he said.

Beyond Ukraine's immediate needs, NATO wants to see how it can help the country longer-term, by upgrading its Soviet-era equipment to the alliance's modern standards and providing more military training.

Slovak Foreign Minister Rastislav Kacer said the allies must help Ukraine so "the transition to full membership will be very smooth and easy" once both NATO and Kyiv are ready for accession talks.

In a statement, the ministers vowed to help Ukraine rebuild once the war is over, saying: "we will continue to strengthen our partnership with Ukraine as it advances its Euro-Atlantic aspirations."

Ukraine, for its part, called for more supplies of weapons to defend itself, and quickly.

"Faster, faster and faster," Foreign Minister Dmytro Kuleba said. "We appreciate what has been done, but the war goes on."

"In a nutshell," he said, "Patriots and transformers is what Ukraine needs the most." Stoltenberg confirmed that deliveries of such sophisticated missile systems are under consideration.

The U.S. is open to providing Patriot missiles, said a senior U.S. defense official who briefed Pentagon reporters on Tuesday, speaking on condition of anonymity. While Ukraine has asked for the system for months, the U.S. and it allies have been hesitant to provide it to avoid further provoking Russia.

German Chancellor Olaf Scholz said Tuesday his country's offer to send Patriot surface-to-air missile systems to Poland remains on the table, despite Warsaw's suggestion that they should go to Ukraine instead.

Dmitry Medvedev, deputy chairman of the Russian Security Council, said Tuesday on Telegram: "If, as Stoltenberg hinted, NATO supplies the Kyiv fanatics with Patriot complexes along with NATO personnel, they will immediately become a legitimate target of our armed forces. I hope the Atlantic impotents understand this."

At the Romania meeting, ministers made pledges of military support for Ukraine, others for financial and nonlethal aid.

The U.S. announced $53 million to buy parts for Ukraine's electrical grid. The network has been battered countrywide since early October by targeted Russian strikes, in what U.S. officials call a Russian campaign to weaponize the coming winter cold.

Estonia's foreign minister, Urmas Reinsalu, went a step further than most, calling on his NATO partners to pledge 1% of their GDP to Ukraine in military support, saying it would make "a strategic difference."

Most NATO allies, however, are struggling to spend 2% of GDP on their own defense budgets.

The foreign ministers of NATO candidates Finland and Sweden are joining the talks.

NATO is eager to add the two Nordic nations to the defensive forces lined up against Russia. Turkey and Hungary are the holdouts on ratifying their applications. The 28 other member nations have already done so.

In Kyiv, residents of the Ukrainian capital prepared for Russian missile attacks aiming to take out more energy infrastructure as winter approaches.

Ukraine's first lady implored the West to retain the steadfastness that Ukrainians have shown against Putin's military campaign.

"Ukrainians are very tired of this war, but we have no choice in the matter," Olena Zelenska, the wife of President Volodymyr Zelenskyy, said in a BBC interview during a visit to Britain.

"We do hope that the approaching season of Christmas doesn't make you forget about our tragedy and get used to our suffering," she said.

About a third of Ukraine's residents faced power supply disruptions, Ukraine's state grid operator said, because of increased demand due to colder temperatures and the emergency shutdown of power units.

"The overall deficit in the energy system is a consequence of seven waves of Russian missile attacks on the country's energy infrastructure," electricity system operator Ukrenergo said.

The Ukrainian government was working to help residents cope with the cold and snowy weather. It rolled out hundreds of help stations, christened "Points of Invincibility," where residents facing the loss of power, heating and water can warm up, charge their phones, enjoy snacks and hot drinks, and even be entertained.

As of Tuesday, Tymoshenko said power had been restored to 24% of residents in the recently liberated southern city of Kherson.

The governor of Russia's Kursk region said on Telegram two areas had partly lost electricity because of Ukrainian cross-border attacks. The Kyiv government didn't confirm the attacks, which would appear to be retaliation for the Russian bombardment of Ukraine's energy facilities.

One civilian was killed and three were injured in a Russian rocket attack on residential neighborhoods in Lyman, an eastern city in Ukraine's Donetsk region, Tymoshenko reported. A hospital in Kherson also came under fire from Russian forces stationed across the Dnieper River, without causing casualties or serious damage, he said.

Some 47 miles upstream from the city, Kremlin-installed authorities said shelling killed two civilians and injured two others Tuesday in Nova Kakhovka, another Kherson region city. Because of such attacks, the Moscow-backed officials have encouraged residents to evacuate deeper into Russian-held territory.

The prospect of peace remained remote. The Kremlin reaffirmed Tuesday that negotiations would be possible if Ukraine meets Russian demands. Kremlin spokesman Dmitry Peskov told reporters, "It's impossible to hold any talks now because the Ukrainian side strongly rejects them."

He noted that "political will and readiness to discuss the Russian demands" are needed to conduct negotiations.

Russia has demanded that Ukraine recognize Crimea as part of Russia and acknowledge other Russian gains. It also has repeated its earlier demands for "demilitarization" and "denazification."

Ukraine wants Russia to withdraw from Crimea and all other annexed territory, face prosecution for war crimes, pay for rebuilding Ukraine and meet other demands.

In other developments, Zelenskyy, in his nightly video address Tuesday, welcomed an agreement in Berlin by justice ministers of the Group of Seven industrial powers to coordinate more closely on investigating war crimes in Ukraine.

The United Nations welcomed the donation of about 286,000 tons of fertilizer from Russian producers that couldn't export from European ports because of private-sector concerns about financing and insurance.

In an initial step, U.N. spokesman Stephane Dujarric said the World Food Program-chartered ship, MV Greenwich, left the Netherlands Tuesday with about 22,000 tons of fertilizer destined for Malawi via Mozambique.

An estimated 400,000 Russians have entered Kazakhstan since Putin announced a partial mobilization to bolster his Ukraine invasion force Sept. 21, the Interfax news agency quoted a Kazakhstan government official as saying. Most of those who fled to Kazakhstan, apparently to avoid Russia's military call-up, are believed to have used it as a crossing point to other countries.