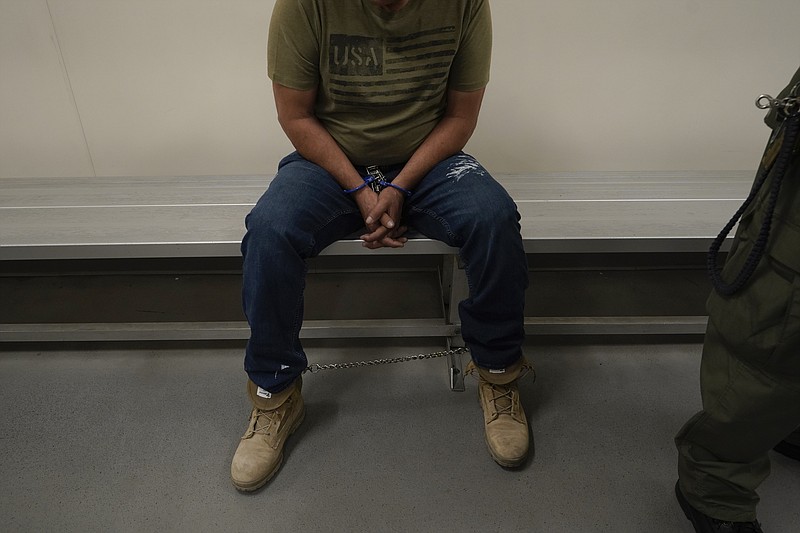 FILE - An immigrant considered a threat to public safety and national security waits to be processed by U.S. Immigration and Customs Enforcement agents at the ICE Metropolitan Detention Center in Los Angeles, after an early morning raid, June 6, 2022. The Supreme Court is taking up a dispute over a blocked Biden administration policy that would prioritize deportation of people in the country illegally who pose the greatest public safety risk. (AP Photo/Damian Dovarganes, File)

WASHINGTON -- The Supreme Court wrestled Tuesday with a dispute over a Biden administration policy that would prioritize deportation of people in the country illegally who pose the greatest public safety risk.

It was not clear after arguments that stretched past two hours and turned highly contentious at times whether the justices would allow the policy to take effect, or side with Republican-led states that have so far succeeded in blocking it.

At the center of the case is a September 2021 directive from the Department of Homeland Security that paused deportations unless individuals had committed acts of terrorism, espionage or "egregious threats to public safety." The guidance, issued after Joe Biden became president, updated a Trump-era policy that removed people in the country illegally regardless of criminal history or community ties.

On Tuesday, the administration's top Supreme Court lawyer told the justices that federal law does "not create an unyielding mandate to apprehend and remove" every one of the more than 11 million immigrants living in the country illegally.

Solicitor General Elizabeth Prelogar said it would be "incredibly destabilizing on the ground" for the high court to require that. Congress has not given Homeland Security enough money to vastly increase the number of people it holds and deports, the Biden administration has said.

But Texas Solicitor General Judd Stone told the court the administration is violating federal law that requires the detention and deportation of people who are in the U.S. illegally and who have been convicted of any serious crime, not just the most serious, specifically defined ones.

Chief Justice John Roberts was among the conservative justices who pushed back strongly on the Biden administration's arguments.

"It's our job to say what the law is, not whether or not it can be possibly implemented or whether there are difficulties there, and I don't think we should change that responsibility just because Congress and the executive can't agree on something," he said.

"It's impossible for the executive to do what you want it to do, right?" Roberts asked.

Justice Brett Kavanaugh said whatever the actual number, "the resources still aren't there."

The court's three liberal justices, however, were sympathetic to the Biden administration's arguments. Justices Sonia Sotomayor and Elena Kagan, made clear they believed that Texas and Louisiana, which joined Texas in suing over the directive, weren't even entitled to bring their case.

Kagan picked up on a Republican litigation strategy that has succeeded in slowing Biden administration initiatives by going to GOP-friendly courts. During arguments, she said Texas could file its suit in a courthouse where it was guaranteed to get a sympathetic hearing and one judge stopped "a federal immigration policy in its tracks."

The states said they would face added costs of having to detain people the federal government might allow to remain free inside the United States, despite their criminal records.

The federal appeals court in Cincinnati earlier overturned a district judge's order that put the policy on hold in a lawsuit filed by Arizona, Ohio and Montana. But in the separate suit filed by Texas and Louisiana, a federal judge in Texas ordered a nationwide halt to the guidance and a federal appellate panel in New Orleans declined to step in.

In July, the court voted 5-4 to leave the immigration policy frozen nationwide. Conservative Justice Amy Coney Barrett joined the court's three liberals in saying they would have allowed the Biden administration to put in place the guidance.

At the same time, the court said it would hear arguments in the case in late November.

The justices have several questions to sort through, whether the states should have been permitted to file their challenge in the first place, whether the policy violates immigration law and, if it does, whether it was appropriate for the Texas-based judge to block it.

On that last point, Prelogar said the judge's decision to "vacate" the policy was wrong, and her argument questioned whether judges have been getting it all wrong for decades.