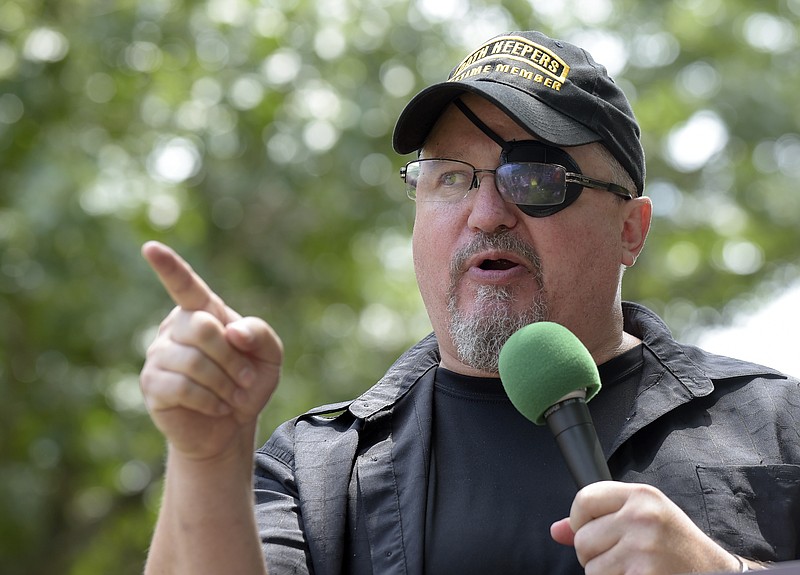 FILE - Stewart Rhodes, founder of the citizen militia group known as the Oath Keepers speaks during a rally outside the White House in Washington, on June 25, 2017. (AP Photo/Susan Walsh, File)

Oath Keepers founder Stewart Rhodes and one of his subordinates were convicted Tuesday of seditious conspiracy for a violent plot to overturn the 2020 presidential election and keep then-President Donald Trump in power, while three other co-defendants were cleared of the charge.

The split verdicts, coming after three days of deliberations, were the first time in nearly 20 trials related to the Capitol attack that a jury decided that its resulting violence was the product of an organized conspiracy.

Seditious conspiracy is the most serious charge brought in any of the 900 criminal cases stemming from the vast investigation of the Capitol attack, an inquiry that could still result in scores, if not hundreds, of additional arrests. It carries a maximum penalty of 20 years in prison.

Rhodes was convicted of sedition along with Kelly Meggs, who ran the Florida chapter of the Oath Keepers at the time of the Capitol attack. Three other defendants in the case -- Kenneth Harrelson, Jessica Watkins and Thomas Caldwell -- were found innocent of sedition.

Rhodes was acquitted of two other conspiracy charges: one accusing him of plotting to disrupt the certification of the election Jan. 6 and the other of plotting to stop members of Congress from discharging their duties that day.

A charge that traces back to efforts to protect the federal government against Southern rebels during the Civil War, seditious conspiracy has been used over the years against a wide array of defendants -- among them, far-right militias, radical trade unions and Puerto Rican nationalists.

Rhodes and Meggs are the first people in nearly 30 years to be found guilty of the rarely used charge at trial. The last successful sedition prosecution was in 1995 when a group of Islamic militants was found guilty of plotting to bomb several New York City landmarks.

The Oath Keepers' sedition trial began in early October when Jeffrey Nestler, one of the lead prosecutors in the case, told the jury in his opening statement that in the weeks after President Joe Biden won the election, Rhodes and his subordinates "concocted a plan for an armed rebellion to shatter a bedrock of American democracy" -- the peaceful transfer of presidential power.

Nestler also closed the government's case last week, declaring that the Oath Keepers had plotted against Biden, ignoring both the law and the will of the voters, because they hated the results of the election.

"They claimed to be saving the Republic," he said, "but they fractured it instead."

In between those remarks, prosecutors showed the jury hundreds of encrypted text messages swapped by Oath Keepers members, demonstrating that Rhodes and some of his followers were in thrall to fears that Chinese agents had infiltrated the U.S. government and that Biden -- a "puppet" of the Chinese Communist Party -- might cede control of the country to the United Nations.

The messages also showed that Rhodes was obsessed with the leftist movement known as antifa, which he believed was in league with Biden's incoming administration. At one point during the trial, Rhodes, who took the stand in his own defense, told the jury he was convinced that antifa activists would storm the White House, overpower the Secret Service and forcibly drag Trump from the building if he failed to admit his defeat to Biden.

Prosecutors sought to demonstrate how Rhodes, a former Army paratrooper with a law degree from Yale University, became increasingly panicked as the election moved toward its final certification at a joint session of Congress on Jan. 6. Under his direction, the Oath Keepers -- whose members are largely former law-enforcement officers and military veterans -- took part in two "Stop the Steal" rallies in Washington, providing event security and serving as bodyguards for pro-Trump dignitaries.

The defense focused heavily on seeking to show that Rhodes' rhetoric was just bluster and that the Oath Keepers had no plan before Jan. 6 to attack the Capitol.

Throughout the postelection period, the jury was told, Rhodes was desperate to get in touch with Trump and persuade him to take extraordinary measures to maintain power. In December 2020, he posted two open letters to Trump on his website, begging the president to seize data from voting machines across the country that would purportedly prove the election had been rigged.

In the letters, Rhodes also urged Trump to invoke the Insurrection Act, a more than two-century-old law that he believed would give the president the power to call up militias like his own to suppress the "coup" -- purportedly led by Biden and Kamala Harris, the incoming vice president -- that was seeking to unseat him.

"If you fail to act while you are still in office," Rhodes told Trump, "we the people will have to fight a bloody war against these two illegitimate Chinese puppets."

'MEANS TO AN END'

Prosecutors said the Oath Keepers saw an opportunity to advance their plot to stop the transfer of power and sprang into action when the mob started storming the Capitol. The Capitol attack was a "means to an end" for the Oath Keepers, Assistant U.S. Attorney Kathryn Rakoczy told jurors in her closing argument.

Rhodes took the stand to tell jurors there was no plan to attack the Capitol and insist that his followers who went inside the building went rogue.

Rhodes testified that he had no idea that his followers were going to join the mob and storm the Capitol and said he was upset after he found out that some did. Rhodes said they were acting "stupid" and outside their mission for the day.

Rhodes tried to convince the jury during his testimony that he had not been involved in setting up the "quick reaction force." But he also argued that if Trump had invoked the Insurrection Act, it would have given the Oath Keepers the legal standing as a militia to use force of arms to support the president.

Jurors heard how Rhodes spent thousands of dollars on an AR-platform rifle, magazines, mounts, sights and other equipment on his way to Washington ahead of the riot. They watched surveillance footage from the Virginia hotel where some Oath Keepers stashed weapons for "quick reaction force" teams prosecutors said were ready to get weapons into the city quickly if they were needed. The weapons were never deployed.

Caldwell, a former Navy officer, tried at one point to secure a boat to ferry the guns across the Potomac River, concerned that streets in the city might be blocked.

On Jan. 6, Oath Keepers wearing combat gear were seen on camera shouldering their way through the crowd and into the Capitol. Rhodes remained outside like a "general surveying his troops on the battlefield," a prosecutor said.

After the riot, Rhodes and other Oath Keepers went to an Olive Garden restaurant to celebrate, according to prosecutors.

Another Rhodes lawyer, Ed Tarpley, described the verdict as a "mixed bag," adding, "This is not a total victory for the government in any way, shape or form."

"We feel like we presented a case that showed through evidence and testimony that Mr. Rhodes did not commit the crime of seditious conspiracy," Tarpley said.

Even with the convictions, the government is continuing to prosecute several other Oath Keepers, including four members of the group who are scheduled to go on trial on seditious conspiracy charges Monday.

Another group of Oath Keepers is facing lesser conspiracy charges at a trial now set for next year, and Kellye SoRelle, Rhodes' onetime lawyer, has been charged in a separate criminal case.

Information for this article was contributed by Alan Feuer and Zach Montague of The New York Times and by Lindsay Whitehurst, Alanna Durkin Richer and Michael Kunzelman of The Associated Press.