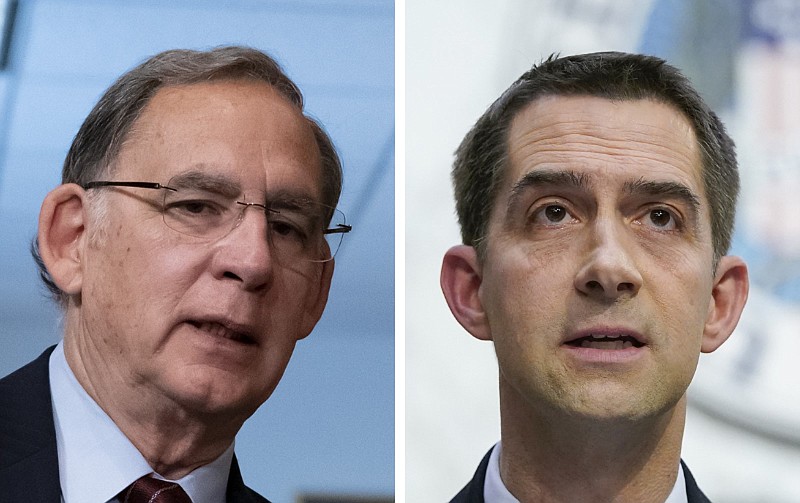 WASHINGTON -- The U.S. Senate passed legislation Tuesday to ensure federal protections for same-sex and interracial couples, albeit without support from Arkansas' senators.

Sens. John Boozman and Tom Cotton were among the 36 Republican senators who voted against an amended version of the Respect for Marriage Act. The Senate passed the bill in a 61-36 vote with 12 Republicans joining the Democratic caucus.

The Respect for Marriage Act would require the federal government to recognize marriages between two individuals regardless of their sex, race or ethnicity, and states would have to acknowledge same-sex and interracial marriages from other states. The legislation also repeals the Defense of Marriage Act, a 1996 law establishing the federal definition of marriage as "only a legal union between one man and one woman as husband and wife."

States would not be required to issue marriage licenses that conflict with their laws, and religious organizations such as churches and schools would not have to provide services to same-sex couples.

The Senate bill is the byproduct of bipartisan discussions with an amended version introduced earlier this month amid concerns about permitting polygamous unions and limiting religious liberties.

"By passing this bill, we are showing that the American government and people see them and respect them," Wisconsin Democrat Tammy Baldwin, the Senate's first openly LGBTQ member, said on the Senate floor.

The vote comes after the House of Representatives' passage of legislation in July codifying the 2015 U.S. Supreme's decision legalizing same-sex marriage. Forty-seven Republicans joined Democratic members in the vote. None of Arkansas' four House members supported that version of the bill.

President Joe Biden had called on Congress to pass the Respect for Marriage Act earlier this month, noting he will "promptly sign it into law" once it reaches his desk.

The congressional actions stem from the Supreme Court's June decision to overturn the national right to abortion. Justice Clarence Thomas suggested a review of "all of this Court's substantive due process precedents" -- including the Obergefell v. Hodges decision on same-sex marriage -- in his opinion concurring with a majority of justices. Other justices insisted the abortion ruling does not affect other decisions.

"Today, the long but inexorable march towards greater equality advances forward," Senate Majority Leader Chuck Schumer, D-N.Y., said before the vote. "By passing this bill, the Senate's sending a message that every American needs to hear: No matter who you are or who you love, you, too, deserve dignity and equal treatment under the law."

Boozman and Cotton voted against advancing the legislation leading up to Tuesday's vote. Both stated Congress should instead focus its attention on other matters.

"This is an attempt by Democrats to score political points by manufacturing a threat to marriage that the court acknowledges is unfounded while diverting attention away from their failed agenda that has made it harder for families to afford everyday essentials," Boozman, of Rogers, told the Arkansas Democrat-Gazette in a statement ahead of a Nov. 16 procedural vote.

Cotton, of Little Rock, argued the matter of marriage is outside of Congress' constitutional powers, adding the bill's language does not do enough to protect religious institutions.

Jerry Cox, executive director of the conservative Family Council organization, said Boozman and Cotton's votes align with Arkansans' values. In an interview with the Arkansas Democrat-Gazette on Tuesday, Cox mentioned how Arkansans overwhelmingly supported an amendment to the state constitution declaring marriage as a union between a man and a woman in the 2004 election.

"That probably has changed some over the years, but I think one would be safe to say that a majority of the people in Arkansas, if they were allowed to vote today, that they would vote to affirm marriage as the union of a man and a woman," he said.

Boozman and Cotton voted for three Republican amendments aimed at protecting religious entities opposed to same-sex marriages. The Senate rejected each proposal, with the legislation's sponsors arguing the amended resolution does enough to safeguard religious liberties.

"It has been suggested by some that the amended Respect for Marriage Act would somehow demean individuals who hold traditional views on marriage. To the contrary," Sen. Susan Collins, R-Maine, said on the Senate floor. "This legislation would explicitly recognize in federal law for the first time that such views and the people who hold them are due proper respect."

Cox is among those with doubts about protections for religious entities.

"We have documents that affirm that marriage should be the union of a man and a woman," he said regarding his organization. "If this law passes, how much leverage does that give the Internal Revenue Service to come back to an organization like us and say, 'You know what? Your definition of marriage and the way you operate is inconsistent now with federal law. Therefore, you will not be allowed to be a nonprofit under 501(c)(3) and donations to your organization will no longer be tax-deductible.'

"That's an example of things that could come up -- and probably will come up -- down the road with this when it passes," Cox added.

"This is a critical step forward, but this is not the end of the line," said Sarah Warbelow, legal director for the Human Rights Campaign.

"It does not guarantee marriage equality nationwide. There are limitations on what the federal government can do in that respect. And it doesn't address the very real need for nationwide nondiscrimination protections that go beyond the workplace to include housing, public places and spaces, education [and] health care."

"This is sort of a bipartisan issue that should be treated as such," Warbelow said. "We've seen some tremendous change in this country, particularly for same-sex couples. But there are sadly politicians who want to use LGBTQ identities as a political tool."

Legislators' consideration of same-sex marriage comes in the final weeks of the current Congress. Democrats will maintain control of the Senate with the Dec. 6 runoff election in Georgia determining if they will have a 50- or 51-seat majority. Republicans will control the House with a slim majority.