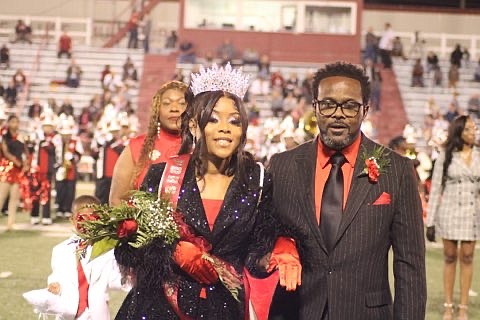 Zebra homecoming queen Tamerah Simmons is escorted across the field on Friday night by her grandfather, Warren G. Smith. Tamerah is the water girl for the football team and is active in Future Business Leaders of America and is interested in auto mechanics. (Special to The Commercial/Jamie Hooks)

The junior was just getting going.

Curtchfield broke a tackle and scored on a 61-yard pass play from Landon Holcomb, and then caught a 23-yard scoring pass from Will Howell as the Zebras went on to win 49-14 against the Beebe Badgers at Jordan Stadium.

The tone for this victory was set when Pine Bluff defeated Maumelle 26-0 on the road a week earlier, Crutchfield said.

"This win was big for us, and [Coach] was preaching all week, we've got to stay focused," Crutchfield said. "That was the keyword of the week, staying focused."

The win gave Pine Bluff (4-1, 3-1 in 5A-Central) sole possession of third place in the conference, but the Zebras could be heading into the toughest part of their schedule yet. They'll visit first-place Mills next Friday, then host White Hall and Morrilton (each with two conference losses) before a week off. The team will then pay a visit to second-place Robinson to close out the regular season.

Crutchfield's TD catches were his only receptions of the game, but they were also a big part of Pine Bluff's passing attack. Howell completed eight of 10 passes for 214 yards and four touchdowns, opening the scoring on the Zebras' first offensive series with a 45-yard dial to Austyn Dendy. His other touchdown passes went to Blake Hegwood for 54 yards late in the first half and to X'Zaevion Barnett for 49 yards in the third quarter.

Hegwood pulled down his second touchdown catch from Holcomb from 47 yards out on the first drive of the second half. Hegwood had four catches for 119 yards, while Holcomb was seven for 11 for 173 yards and two touchdowns.

"That's why I love the two-quarterback system," Pine Bluff Coach Micheal Williams said. "When one of them isn't on and the other is on, that's who we're going with."

The Game Changed When

Pine Bluff established its defensive pressure from the opening snap, holding Beebe (4-2, 2-2) to minus-12 yards on the first drive.

Pine Bluff led 20-0 before Beebe earned its first first down early in the second quarter. Zack Grant completed a 36-yard touchdown pass to Kiandrea Barker to end the shutout bid.

Barker, who ran 12 times for 102 yards, searched for a hole and then broke a 39-yard run in the third quarter for Beebe's longest play of the night. Barker finished that drive with a 20-yard touchdown run.

The Zebras totaled 462 yards of offense and held the Badgers to 145.

"The defense was amazing," Williams said. "[Beebe] scored off a penalty. It's always hard to bounce back from that, but defense played lights out. They set the tone for the offense."

Barnett scored on two 2-point conversions, Holcomb threw a 2-point pass to Jordon Harris and Maclin Heisler kicked an extra point for the Zebras. Daniel Eskandarian went 2 for 2 on extra points for the Badgers.

THE GAME BALL GOES TO

Howell went for a near-perfect passing night and four touchdowns.

"It's just the competition in practice," said the senior, who was recently offered a baseball scholarship to the University of Memphis. "You want to do your best so you can stay on the field longer."

Pine Bluff can make a significant dent in the 5A-Central race when it visits Mills next Friday in Little Rock. Beebe will host Vilonia that week. 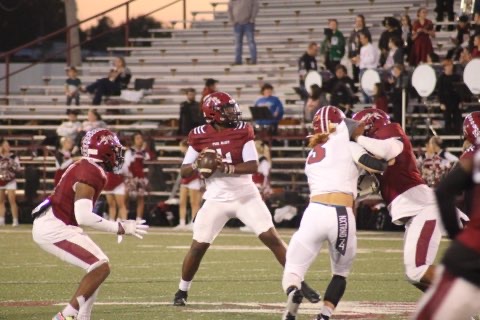 Zebra quarterback Will Howell sets up to pass on Friday night during Pine Bluff's game against Beebe. (Special to The Commercial/Jamie Hooks)
More News