IN THE GARDEN: Mystery vine is climbing hemp, a perennial food source for butterflies and moths 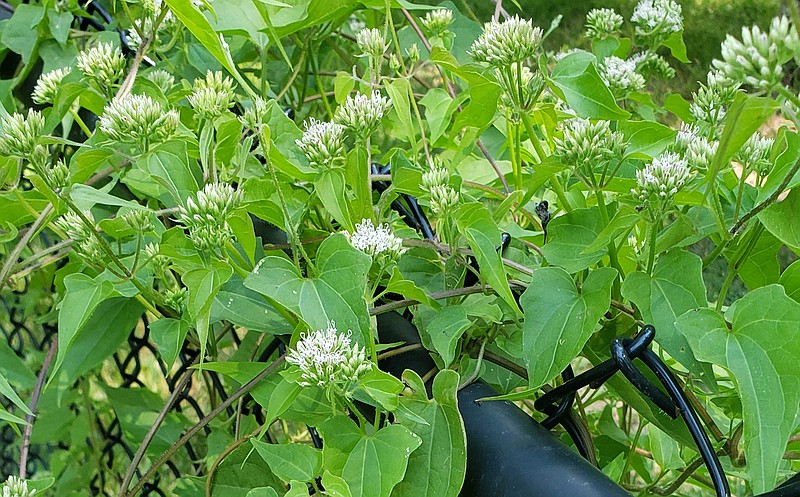 Climbing hemp or climbing boneset (Mikania scandens) is not considered invasive, but one of its cousins is, Mikania micrantha. (Special to the Democrat-Gazette)

Q: I am hoping you can identify this mystery vine that has appeared on my fence this summer [the reader sent a photo]. The flowers have a slight scent that is pleasant.

A: The vine in question is called climbing hemp or climbing boneset. It is Mikania scandens. This native member of the aster family is a perennial plant that is a food source for a number of butterflies and moths. It blooms in the fall through a killing frost. It is not considered invasive, but it is related to another species of Mikania which is invasive — Mikania micrantha, commonly called the mile-a-minute vine.

Q: Could you identify the plant in the picture I attached? In the late fall and winter, it has berries. I did not plant it, but it and several others appeared a couple of years ago in the wooded area of my backyard. I cut [it] down and it came back. Is it invasive or OK to let it grow?

A: The plant in question is a nandina. It is an old-fashioned, non-native shrub that has escaped into the wild in some parts of the state, but if managed properly it can add interest to the fall and winter garden. The foliage turns red in the fall and winter. It only will have berries if you allow it to grow and bloom in the spring. This year, it will just be foliage since you cut it back. Growing in the middle of your nandina is a common greenbrier vine with thorns — a horrid weed.

Q: Our mock orange has blossomed (only a few). It was full of blooms this spring but this is new. Is there anything we should do now or in the fall to ensure that we still have blooms for the spring?

A: The torrid summer we had may have caused some plants to shut down a bit early. Once we got some rain and a bit of cool weather, they tried to rebound. It is not unusual to see some late, scattered blooms on spring-blooming plants when this occurs. I have seen blooms on flowering quince, lilacs and others. There is nothing you can do to push the blooms back into their buds, so enjoy what happens now, keep the plants well-watered and healthy until dormancy, and you should still have a show next spring.

Q: I put in three big beds early summer this year of varied hydrangeas — 2 gallon-size and not real close to the house. The deer stripped them down to the bark! What should I do? Will they come back? No way I could put up fences around them. They never touched my oakleaf hydrangeas over the years.

A: Deer are a problem every year in many gardens, but when we have a hard growing season, the problem becomes worse. Clean up the cut edges to prevent any disease damage and consider some type of protective covering to prevent more deer damage. The plants should rebound after one attack, but if the problem persists, deer damage can be deadly.

Q: Good morning, I've been meaning to cut back my flowering plum tree for years since it is growing up into the side of my house and it looks like a future ice storm will create severe damage. Can I cut it back before, during or after the winter, or wait till it blooms out next spring.

A: If it is an ornamental flowering plum and not a plum you are growing for edible plums, you would treat it as an ornamental and do any needed pruning after flowering next spring. Flower buds are set or are setting now on all spring-blooming plants. Pruning now won't harm the plant but will remove next year's flowers. For fruit-bearing fruit trees, pruning is usually done in late winter before new growth begins. Pruning before flowering limits the number of flowers, and thus fruit, to produce larger and better-quality fruits.