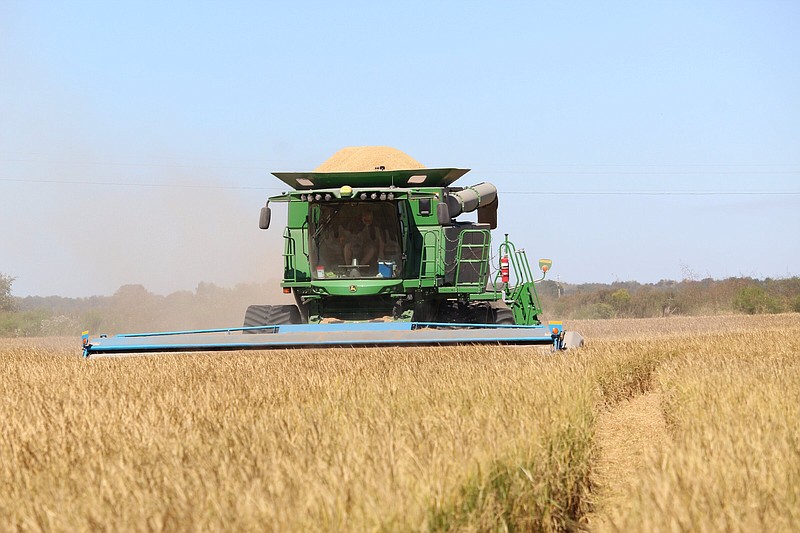 Though there are several ongoing Arkansas research projects geared toward growing rice more sustainably today, Isbell Farms has been doing it since the 1970s.

The Isbell family cultivates long-grain, some specialty medium-grain and sake rice on 3,500 acres in England, Ark.

The Isbells sell sake rice in the U.S. and abroad, to a sake brewery in Mexico; Takara Sake, which has a brewery in Berkeley, Calif.; SakeOne, based in Oregon; and several regional craft brewers.

The Isbell family is currently harvesting rice crops before flooding fields for winter.

This practice of leveling out a rice field to make it very flat so water on top of the soil is evenly spread takes a lot of time and capital but has created some cost savings, Isbell said.

"Now we can just hold a very shallow flood across the field without wasting any water," Isbell said.

This practice made it possible for the Isbells to use the alternating wetting and drying farming technique -- a practice to minimize irrigation without decreasing yields. Combined, both practices are used to reduce the farm's carbon footprint and water usage.

Roughly a third of the farm's electrical usage come from a 300-kilowatt-hour solar power project installed in 2018, which is used for irrigation and drying.

The farm's irrigation system relies on electricity instead of diesel fuel to power water pumps, and the farm tries to use minimum to no tillage, a practice that can be detrimental to soil quality over time.

After harvest, the farm does prescribed burns.

"The environmental side of that is that stubble, when it gets wet, it's going to deteriorate and turn into methane, if you burn it, you're turning it into carbon dioxide," Isbell said.

"You're exchanging a better greenhouse gas for another but you're going to have stubble leftover that has to go somewhere, but all in all, it's the better approach."

The Isbells have two devices set up by the University of Arkansas on rice fields that measure methane flux coming out of the ground, with data spanning the last seven years.

"We'll vary our irrigation practices across those fields, so on one, we'll use alternate wetting and drying and one we won't, and then we'll switch it up the next year and also do traditional [irrigation] for a baseline," Isbell said.

"The data sets over the years have shown that using that irrigation practice minimizes the methane production by 50 percent."

A research group will come out in a few weeks and put in 7,000 pounds of golden shiner fish on a 70-acre flooded rice field.

"The goal there is that they will eat the zooplankton that produces methane over the winter," Mark Isbell said.

"We can address methane production during the growing season by using alternate wetting and drying but we don't really have a tool to address methane over the winter, which is much less, but still does exist, so the research question is, will these fish help us minimize that?"

The fish will be harvested in spring before farmers dry the fields out to plant.

Rice accounts for 20% of calories consumed around the world, but anywhere from 9% to 12% of methane emissions come from rice cultivation worldwide, Isbell said.

"So if we can learn here how to address that, which we have, then you can make a major impact on greenhouse gases in an environment that is very important for food production and nutrition worldwide," Isbell said.

Instead of planting cover crops after harvest to improve soil, the Isbells turn their rice fields into a home for birds in winter.

Egrets live on the Isbell's rice fields eating insects and frogs this time of year, while ducks and geese will spend the winter on the farm.

Farmers in the Delta region will often flood their fields over winter to create a wetland wildlife habitat for waterfowl and migratory birds; ducks and geese will eat leftover grain and plant matter, as well as weed seeds during the cooler season.

This can help with weed control and can conserve soil.

"When you harvest rice, some goes out the back of the combine and what is missed by the combine is eaten by ducks," Mark Isbell said.

It can be burdensome on farmers who may not be able to afford to make major infrastructure changes geared toward climate change. There are existing governmental programs to assist with such costs, but such programs be competitive, Isbell said.