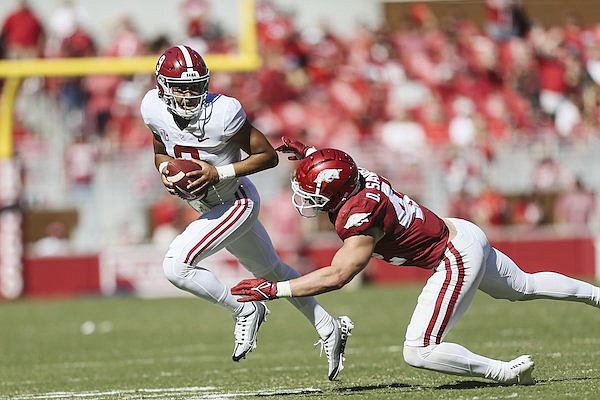 FAYETTEVILLE — Playing without its Heisman Trophy quarterback, Alabama held off a second-half rally by Arkansas on Saturday at Reynolds Razorback Stadium.

The No. 2 Crimson Tide pulled away for a 49-26 victory to extend their winning streak to 16 games against the 20th-ranked Razorbacks. Alabama has won every game in the series since 2007, its first season under long-time coach Nick Saban.

The Crimson Tide (5-0, 2-0 SEC) have won in eight consecutive trips to Fayetteville by an average margin of 27 points.

Arkansas (3-2, 1-2) trailed 28-0 in the second quarter. Ketron Jackson caught a 6-yard touchdown pass from quarterback KJ Jefferson just before halftime, and the Razorbacks outscored Alabama 16-0 in the third quarter to pull within 28-23.

Alabama played most of the game without Bryce Young, the 2021 Heisman winner who appeared to injure his throwing shoulder early in the second quarter when he was sacked by Arkansas linebacker Drew Sanders, an Alabama transfer. The sack gave Sanders 6.5 sacks this season. He entered the game tied for the national lead.

Young completed 7 of 13 passes for 173 yards and 1 touchdown, and was intercepted once before the injury. The Crimson Tide led 14-0 when he went into the team’s injury tent before ultimately going to the locker room for further examination.

Back-up quarterback Jalen Milroe struggled to move the Alabama offense before he delivered perhaps the game’s most pivotal play, a 77-yard scramble to the Arkansas 3-yard line on a third-and-15 early in the fourth quarter. Jase McClellan ran for a 3-yard touchdown two plays later to extend the Crimson Tide’s lead to 35-23.

Jahmyr Gibbs added a 72-yard touchdown run on the first play of Alabama’s next drive to make the score 42-23 and empty a good bit of what was left from the announced 75,579 in attendance. It was the fifth-largest crowd for a game in Fayetteville.

With Young behind center, Alabama moved the ball at will in the first quarter. The Crimson Tide’s first offensive possession ended in the red zone when Young was intercepted by Dwight McGlothern at the 1-yard line, but Alabama hit big plays to score on its next two drives.

Young threw to Kobe Prentice for a 47-yard touchdown with 7:41 remaining in the first quarter to put the Crimson Tide ahead 7-0. Young added an 8-yard rushing touchdown with 2:35 to play in the quarter, one play following a 53-yard pass to Isaiah Bond.

Milroe ran for a 3-yard touchdown with 8:29 to play before halftime to put the Tide ahead 21-0, three plays following a 45-yard punt return by Kool-Aid McKinstry. Milroe added a 22-yard touchdown pass to JoJo Earle with 2:51 remaining in the second quarter to give the Crimson Tide a 28-point lead.

Milroe, a second-year freshman from Katy, Texas, finished the game 4-of-9 passing for 65 yards, and with 91 rushing yards on 6 attempts.

Arkansas’ 16-0 third quarter spurt came on the heels of the Razorbacks being outscored by a combined 41-13 in the third quarters of games against Cincinnati, South Carolina, Missouri State and Texas A&M to begin the season.

AJ Green’s 13-yard touchdown run with 7:47 left in the third quarter was followed by a successful onside kick recovered by kickoff specialist Jake Bates. That drive led to a 22-yard field goal by Cam Little to cut the Alabama lead to 28-17.

The Crimson Tide followed Little’s first field goal with a three-and-out, and Arkansas caught another break when Alabama long snapper Kneeland Hibbett snapped wide right of punter James Burnip, who recovered the ball at the Razorbacks’ 3. Raheim Sanders ran for a 3-yard touchdown on the next play, but Arkansas’ two-point conversion attempt was no good and Alabama led 28-23 at the end of the third quarter.

The Razorbacks had 141 yards in the third quarter and held the Crimson Tide to minus-1 yard, but Alabama controlled most of the rest of the game. Arkansas finished with 377 yards of offense, 46 of which came late in the fourth quarter when back-up quarterback Kade Fortin led a drive that resulted in a turnover on downs inside the red zone.

Arkansas, which has lost two straight, is scheduled to play at Mississippi State next Saturday at 11 a.m.