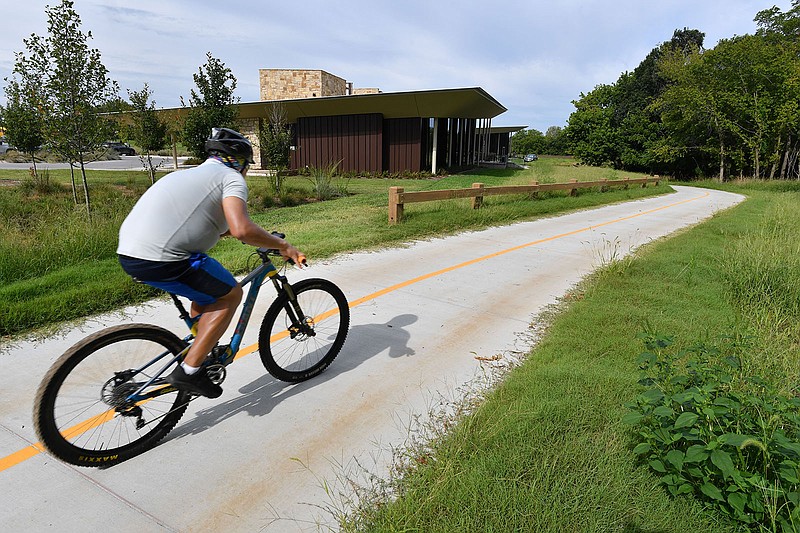 A tree-house-style playground will offer children a unique interaction with the Ozarks prairie, which the center also works to preserve.

A Walton Family Foundation grant helped make the 42,000-square-foot outdoor activity area possible, according to a Friday news release from the Arkansas Game & Fish Commission. The nature center is owned and operated by the commission.

Cheyenne Coleman, an administrative assistant in Springdale, said the Hunt Center averages about 2,000 visitors a month.

The project will use locally sourced natural material whenever possible, Reid Phifer, facilities and operations manager for the Game & Fish Commission, said in the news release. Boulders, trees and more are being shaped and assembled to fit the plans, he said.

"They had a lot of [eastern red cedar] trees that had to be removed, so this is an ideal way to repurpose that wood," he said. "Those unwanted trees have been cut, debarked and are being treated to withstand the elements."

Eastern red cedar is native to the United States but is treated as an invasive species because of its tendency to take over a landscape, particularly in the absence of fire, the news release reads. Red cedar can displace grassland birds and songbirds from native prairies. Many projects that benefit northern bobwhites and other ground-nesting birds involve the removal of red cedars.

The outdoor playground area will sit between the buildings of the nature center, the archery range and walking trails.

Natural State Treehouses in Fayetteville is building the playground project.

The large quail pen will allow room inside for the birds to stretch their wings and fly a little, Phifer said. Overhead cover will protect the birds from harsh weather, he added.

The pen also will be open enough for visitors to see the quail inside, which will become part of educational presentations by center staff and teachers, Phifer said. The quail are ground-nesting birds with plumage that provides excellent camouflage, according to the Game & Fish website.

A once-vast bobwhite quail population has been reduced to living in remnant fields, clear-cut woodlands and abandoned home sites in rural Arkansas, the site continues.

The quail pen should be completed in a few weeks, Coleman said.