Civilians killed amid annexation claim by Compiled by Democrat-Gazette staff from wire reports | October 1, 2022 at 5:21 a.m. 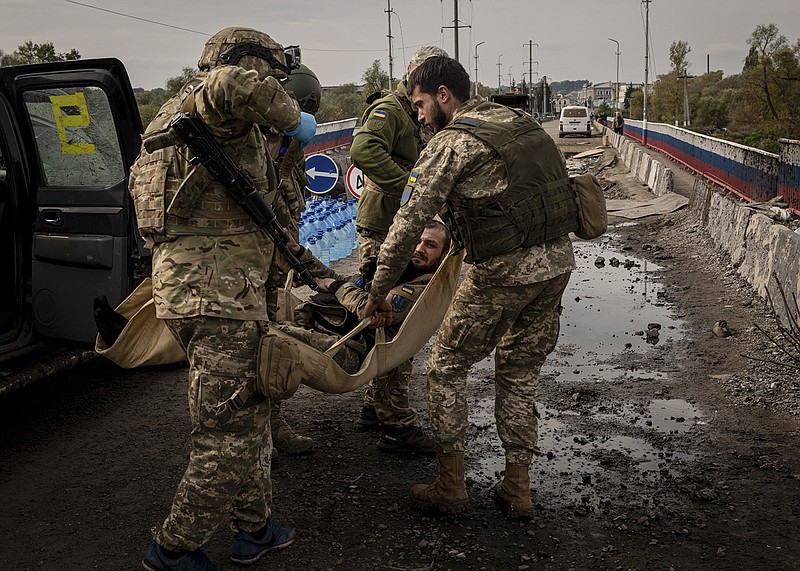 Ukrainian soldiers evacuate an injured service member across a bridge in Kupiansk, Ukraine on Friday in a counter-offensive in the Kharkiv region. More photos at arkansasonline.com/ukrainemonth8/. (The New York Times/Nicole Tung)

KYIV, Ukraine -- Russia unleashed rocket, drone and missile strikes against Ukrainian towns and cities overnight Thursday and into Friday, creating scenes of destruction inside the country hours before the Kremlin announced the annexation of a wide swath of eastern Ukraine.

The most lethal strike landed in Zaporizhzhia, coming after a battlefield defeat in eastern Ukraine.

The attack killed 25 civilians who were waiting at a checkpoint and bus stop and injured another 66, Ukraine's prosecutor general said. That would make it one of the deadliest single attacks against civilians in recent weeks.

Ukrainian President Volodymyr Zelenskyy condemned the strike on the checkpoint as the work of "terrorists," while Bridget Brink, the U.S. ambassador to Ukraine, called it "horrific news."

The wave of overnight attacks came as Moscow says it will now be defending rather than attacking four regions -- Zaporizhzhia, Kherson, Luhansk and Donetsk -- and will use any means necessary to do so, making a thinly veiled nuclear threat.

In his statement, Zelenskyy said Ukraine had sought for years to negotiate a security settlement with Russia, only to be repeatedly rebuffed. Now, he said, he would never negotiate so long as Vladimir Putin remained Russia's leader.

"It is obvious that this is impossible with this Russian president," he said.

In Ukraine, the strike on the checkpoint and bus stop in Zaporizhzhia sprayed shrapnel into vehicles packed with passengers. On the roadside, a deep crater was gouged into fertile black soil and bodies lay scattered about beside damaged cars and minivans.

People at the checkpoint were waiting to be allowed into Russian-occupied territory to pick up relatives and deliver humanitarian aid, the governor of Zaporizhzhia, Oleksandr Starukh, said in a Telegram message.

"All were civilians, our compatriots," he added.

Also on Friday, rockets and Iranian-made kamikaze drones that Russia's military recently acquired hit residential neighborhoods in the southern Ukrainian city of Mykolaiv, killing at least three people and wounding 19, the regional governor said. A missile strike on a parking lot for buses in the city of Dnipro killed one person and ignited a fire that burned 52 buses.

The missile and rocket strikes also came just weeks after the Ukrainian army inflicted a defeat on the Russian military in a counteroffensive in Ukraine's northeastern Kharkiv region, which forced the Russians to retreat, leaving destroyed tanks and their own war dead behind on the roadsides.

Ukrainian officials have consistently said they will disregard Russia's territorial claims and press ahead with counteroffensives in eastern Ukraine and around the southern port city of Kherson. On Friday, the Ukrainian military captured the town of Yampil in the Donetsk region, the Ukrainska Pravda newspaper reported.

In total, the Russian rocket and missile barrages in and near the four provinces Russia asserted it had annexed killed 30 civilians and wounded at least 107 others, the Ukrainian regional authorities said.

The result was deep anger at Russia within Ukraine on a day presented in Moscow as one of reunion for two brotherly peoples.

Borys Filatov, the mayor of Dnipro, one of the cities hit in bombardments, wrote that he hoped to see Russian soldiers "hang on trees" like the debris from the explosions he saw at the site of a missile strike.

"Only the strength of our revenge matters," Filatov said.

In the civilian victims of the strike, Oleksiy Voronin, founder of an aid group whose minivans where perforated by shrapnel Friday, saw a cruel warning from Moscow.

"The events of today are like a message" from Russia, he said, although one he would never accept. "It is not your territory."

Ukrainian forces appeared to have made progress toward recapturing Lyman, a rail hub in the country's east, with the head of Russia's proxy administration in the province saying Friday that the town was "half encircled."

In another sign of Ukraine's progress in the strategic town, Mykhailo Podolyak, an adviser to Zelenskyy, wrote on Telegram that Russian forces "will have to ask for an exit" from Lyman.

Control of the town is seen as a test of whether Ukraine can build on military gains made last month, but the exact status of the battle was not immediately clear.

Fighting for Lyman, which is in the northern part of Donetsk province, has intensified over the past few weeks after Ukraine made a series of gains during a rapid counteroffensive in Kharkiv province in the country's northeast.

When Lyman fell to Russian forces in May, it presaged the capture weeks later of twin cities to the east of town. Those cities, Sievierodonetsk and Lysychansk, succumbed to Russian forces who had maximized their superior firepower in helping Moscow to seize control of Luhansk province, which together with neighboring Donetsk forms the Donbas.

If Ukraine were to recapture Lyman, it would not only increase the likelihood of regaining additional land in Luhansk and Donetsk but also put additional pressure on the Kremlin.

Information for this article was contributed by Andrew E. Kramer and Matthew Mpoke Bigg of The New York Times.