Package includes $12B for Ukraine by Compiled by Democrat-Gazette Staff From Wire Reports | October 1, 2022 at 8:50 a.m. 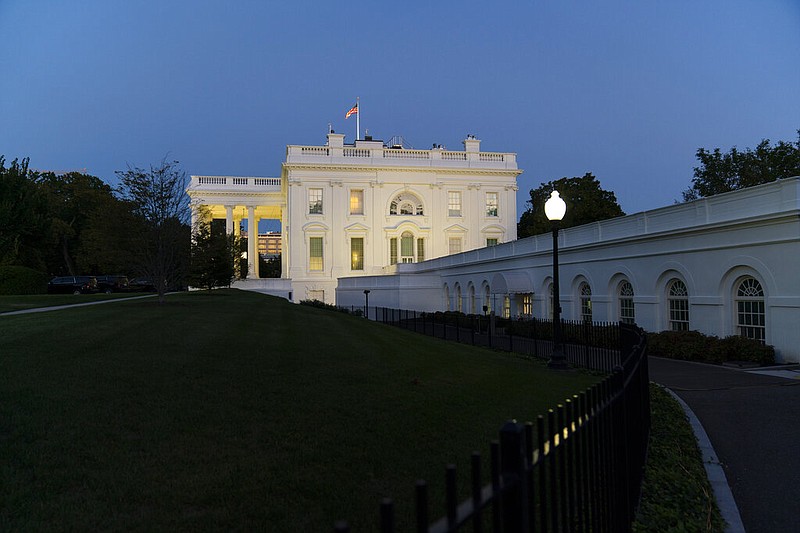 The White House in Washington is illuminated at sunset in this undated file photo. (AP/Alex Brandon)

WASHINGTON -- President Joe Biden signed into law Friday a short-term spending package that would keep the government open through mid-December, staving off a midnight shutdown and sending about $12.3 billion in military and economic aid to Ukraine.

The House passed the measure less than 12 hours before funding was set to lapse. It would keep the government open through Dec. 16, giving lawmakers time to iron out their considerable differences over the dozen annual spending bills.

The package included a third tranche of aid to Ukraine for its battle with Russia, on top of a total of about $54 billion approved earlier this year. With Friday's vote, Congress has now committed more military aid to Ukraine than it has to any country in a single year since the Vietnam War.

In the end, support for the bill was unanimous among Democratic lawmakers. Only 10 Republican lawmakers joined them in voting yes. The measure passed on a vote of 230-201.

Trump ominously wrote that McConnell has a "death wish."

Passage of the bill met the last legislative deadline facing Congress before the November midterm elections. Lawmakers, eager to return to the campaign trail, vowed to address outstanding disputes in the annual legislation as part of an increasingly packed to-do list for when the House and Senate return in November.

"The investments included in this bill are urgent and necessary to avoid disruptions to vital federal agencies, to help communities get back on their feet, to ensure we have the time needed to negotiate a final funding agreement that meets the needs of hardworking people," said Rep. Rosa DeLauro, D-Conn., chair of the Appropriations Committee.

Republican leaders, however, counseled their conference to oppose the package. Although several Senate Republicans supported the package when it passed that chamber Thursday, House Republicans argued that it did little to address their priorities, including providing a substantial increase for the military and shoring up resources at the southern border.

"We know we have a crisis on the southern border. You can turn on the television every night. You can look at the fentanyl pouring into the country. You can see the tragedy of human trafficking," said Rep. Tom Cole, R-Okla. "That is a travesty."

Rep. Kay Granger, R-Texas, the top GOP member on the Appropriations Committee, chastised Democrats for a bill she said was being "rushed through the House today, with just hours to spare to avoid a government shutdown."

"It's deeply unfortunate that we have once again waited to the last minute to fund the government," Cole, a longtime member of the appropriations panel, added. "We should not be in this situation. Both sides have done this."

But the desire to avoid a government shutdown and to help Ukraine was enough to rally the support needed to pass the measure. It would allocate $1.5 billion to replenish weapons and equipment previously sent to the country, while allowing Biden to authorize the transfer of up to $3.7 billion of U.S. equipment and weapons.

It will also provide $3 billion for military support, as well as $4.5 billion for the Ukrainian government to continue operating throughout the war.

"This package comes at a critical moment," said House Speaker Nancy Pelosi, D-Calif., pointing to Ukraine's recent success in reclaiming land that had been seized by Russia and commitments of support she and the Biden administration had made. "With this supplemental, we take another strong step toward honoring that pledge, our country's pledge."

Democrats said passing the bill was important to helping Ukraine as well as victims of recent natural disasters in the U.S., including Hurricane Ian, as it provides a Federal Emergency Management Agency disaster fund with a year's worth of money up front rather than for 2½ months.

"We cannot leave communities behind that are still picking up the pieces from disastrous floods, wildfires and hurricane -- and even basic water system failures," said Rep. Debbie Wasserman Schultz, D-Fla.

Domestic needs addressed by lawmakers in the legislation include ensuring the renewal of a five-year "user fee" agreement that the Food and Drug Administration relies on as part of its budget and setting aside $1 billion for a program that will help lower-income families with heating and energy costs in the coming months.

The legislation also allows the federal government more flexibility to spend existing disaster relief funds in the coming weeks, even as lawmakers acknowledged that it was likely that a separate round of emergency aid would be needed in the coming weeks to address the devastation left by hurricanes in southwest Florida and Puerto Rico.

It would transfer $3 billion from a Pentagon aid program to the State Department for continued Afghan resettlement operations.

"This short-term funding bill will keep the government open and meet a range of critical needs -- from helping communities recover from extreme weather events, to supporting Ukraine, to helping fulfill our promises and commitments to Afghan allies and partners, and more," said Shalanda Young, the director of the Office of Management and Budget.

To ensure there would be enough Republican support for the measure to pass the Senate, however, Democrats agreed to remove billions of dollars in emergency funds to help address the coronavirus pandemic and spread of monkeypox across the country.

Republicans criticized the health spending as unnecessary. The White House said the money would have been used to accelerate the research and development of vaccines and therapeutics, prepare for future covid variants and support the global response.

Democrats also dropped an energy infrastructure plan that had initially been included at the request of Sen. Joe Manchin, a conservative Democrat of West Virginia, as part of an agreement that won his vote in August for the party's major climate, health and tax package.

Dozens of House Democrats had called for the energy plan to be stripped out and considered separately. Senior lawmakers said they would reconsider it once Congress returned in mid-November.

Information for this article was contributed by Emily Cochrane of The New York Times and by Kevin Freking of The Associated Press.