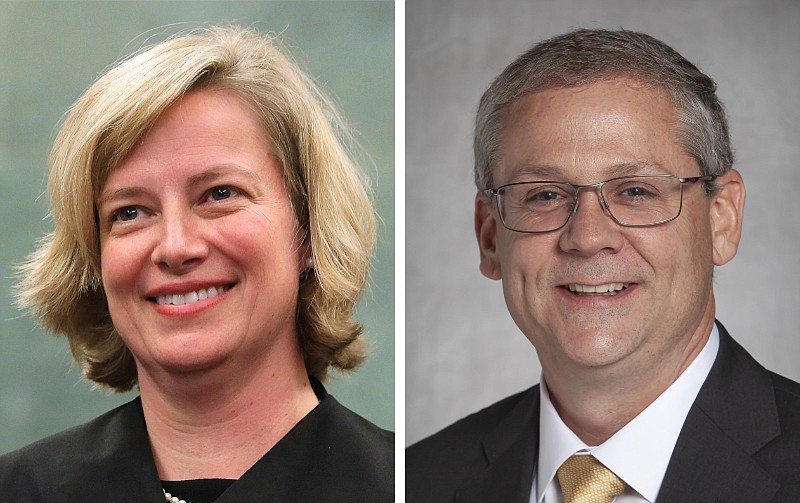 In an opinion and order filed Friday, U.S. District Judge Kristine G. Baker sided with the Libertarian Party of Arkansas in its lawsuit against Secretary of State John Thurston.

She enjoined Thurston from enforcing those sections of state law.

Among other things, the changes implemented by the sections mentioned above effectively increased the signature requirement for getting a party candidate on the statewide ballot from 10,000 to 3% of the number of people who voted in the last election for governor, which would have been 26,746 based on the 2018 election. (The 10,000 signature option was eliminated.)

The statutes also moved up deadlines, shortened the amount of time allowed for candidate petition drives, and required new political parties to qualify candidates through a convention.

In her 83-page opinion and order, Baker wrote, "The Court concludes that, because of the combined effect of the early petition deadline, the 90-day petitioning period, the three percent petition requirement, the requirement that new party candidates declare before the major party candidates are selected, and that new parties select their candidates at a party convention and not at a primary or runoff election, the Court grants plaintiffs' motion for summary judgment."

Baker determined that the plaintiffs had met their burden of demonstrating that the six sections of state law "collectively impose a severe burden on plaintiffs' rights under the First and Fourteenth Amendments and that the State of Arkansas is unable to demonstrate that the statutes are narrowly drawn to serve a compelling state interest."

In Friday's ruling, Baker also denied a motion for summary judgement from Thurston.

"For decades the law has required a minimum level of support for third parties to be on the ballot," Gov. Asa Hutchinson said Saturday. "The court has held this unconstitutional. I will review this decision with the Attorney General and assess whether this case should be appealed."

The lawsuit was filed in 2019 by the Libertarian Party of Arkansas and five individuals, including gubernatorial candidate Ricky Harrington Jr. and Michael Pakko of Little Rock, chairman of the state's Libertarian Party.

Pakko said it was "about the best outcome we could have hoped for."

"Judge Baker laid out all of the arguments and found in our favor on every substantive issue in the case," said Pakko. "If we do need to petition again in the future, this ruling guarantees that we won't be burdened by these objectionable deadlines and restrictions. They have been declared unconstitutional."

It was also the only minor political party to obtain recognition for ballot status in Arkansas by petitioning for the 2019-20 election cycle.

"The Libertarian Party of Arkansas is on the ballot in 2022, having successfully petitioned under the terms of Judge Baker's preliminary injunction issued in 2019," the party said in a news release Saturday. The party "anticipates working with the next legislature to help craft a more fair and equitable process for political parties to gain access to the ballot in Arkansas."

In court testimony, Pakko said there is some perception that the Libertarian Party of Arkansas draws votes away from the Republican Party, though he noted that he has not seen documented evidence of this phenomenon, according to Baker's order.

"Dr. Pakko also testified about his experience in the past with petition drives," she wrote. "He noted that he has personally collected signatures and that the 10,000-signature requirement is a challenging endeavor. He testified that there are limited venues for canvassing for signatures and that significant manpower is required to collect 10,000 signatures in 90 days. He admitted that this is difficult to accomplish with a volunteer effort alone, so some professional canvassers are paid for with donated money."

"The parties dispute whether severe weather and pandemic outbreaks can have a negative effect on approaching people to sign petitions for the recognition of new political parties," wrote Baker. "Plaintiffs maintain that it is rare in any 90-day period from the experience of Dr. Pakko not to lose a certain number of days because of bad weather or pandemic outbreaks."

To retain ballot access as a political party through 2024, Arkansas election law requires that the Libertarian Party's candidate for governor receive at least 3% of the vote in the Nov. 8 general election, according to the party's news release. Otherwise, they will need to petition to become a "new political party" once again.

The Libertarian Party of Arkansas is also running candidates for other state offices, as well as on the local and federal level, for the November election.