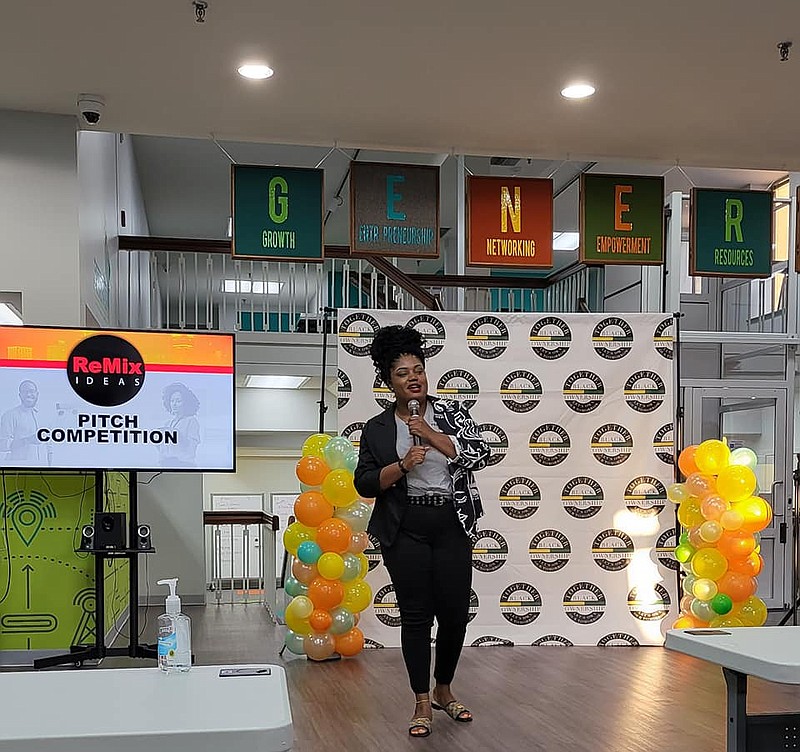 Dominique Akins of Peaky’s Luxe Beauty Parlor and Peaky’s Braid Academy won the Pitch Competition hosted by The Generator and ReMix Ideas. (Special to the Commercial)

Black-owned businesses were the focus of the Black Ownership Movement Tour, an initiative founded by Benito Lubazibwa, a native of Tanzania and graduate of the University of Central Arkansas who is now a local entrepreneur and the founder of ReMix Ideas. Lubazibwa has made a name throughout the state of Arkansas for his impact investing initiative to support Black entrepreneurs.

Washington, who was an advisory board member for The Generator before assuming the interim director position, said the collaboration with ReMix Ideas was a way to help strengthen the relationship between The Generator and the community while establishing new ones.

The day began with a roundtable discussion held at The Generator with city officials, community leaders, college and university leadership, small-business owners and entrepreneurs. The tour, consisting of Lubazibwa and approximately 25 ambassadors of the initiative, later went on to visit several black-owned businesses in the area.

According to Lubazibwa, who documented the tour on his Facebook page, Black people face more barriers and challenges as entrepreneurs. The goal then was to help these individuals with ways to innovate and become sustainable. He also said 70% of the Black community is liquid asset poor, meaning if a financial hardship happens, families would not have enough savings to survive three to six months.

"Black ownership is extremely important," said Lubazibwa during his Facebook video. "We need to own our tomorrow. It's not really about us. It's about our children and grandchildren and creating pathways for economic mobility through business ownership."

During each visit, the owners were able to engage and share their successes as well as their failures with an opportunity for solutions. Lubazibwa said he feels support for Black businesses is a must.

"We talked with community leaders to see what was needed in the city," said Washington. "We visited business owners to hear what their needs were and what we could do to help them."

Washington said ReMix supported each business they visited by making either a donation or purchase from the establishment. From paying for haircuts to donating $1,000 to a community after-school program, the day was filled with impacting moments from the organization.

A stop at the University of Arkansas at Pine Bluff to talk with the students from the Entrepreneurship Club ended in an impromptu pitch competition, with a student winning $1,000 for their business, according to Washington.

The day ended with a pitch competition at The Generator where five business owners competed for a chance to win $5,000. The winner was Dominique Akins of Peaky's Luxe Beauty Parlor and Peaky's Braid Academy.

The Pine Bluff native gave an inspirational testimony of her journey and how she moved to Texas for a better opportunity working in corporate America but didn't feel like she was fulfilling her purpose and passion.

Akins was inspired to do hair when she was a child after uncomfortable hair experiences she encountered with her sister.

"I have an older sister that is 5 years older and was always in charge of doing my hair," said Akins, who added that their mom and dad worked full time day and night. "She was good at what she did. She would do my hair, yank and pull and I would cry and I couldn't do anything because mom and dad weren't here."

Akins said one day while her sister was braiding her hair she became fed up with the painful experience.

"I was over it. I took the braiding hair that she was using to braid my hair with, went upstairs to my room and finished the half of my head that she didn't finish," said Akins. "From that day on she did not have to braid my hair anymore."

Akins said she had been watching her sister the entire time learning the techniques herself. Inspired by her sister's braiding craft at the age of 13, Akins wanted to mirror that. The experience of it all, however, ... not so much.

With uncomfortable experiences being a common stereotype in the braiding community, Akins said she wanted to change the narrative of the hair-braiding experience by incorporating four principles she lives by to this day--integrity, pride, skill and success.

In 2019 she made the decision, with the support from family and friends, to turn her craft into a limited liability corporation.

"I moved myself and my kids back home and I started doing hair in my washroom and then I decided I wanted to do something where other people could join," she said. Though Arkansas does not require a license to braid hair, Akins still pursued her license as well as an instructor's license.

She completed cosmetology training at Paul Mitchell in the summer of 2020 and opened her salon in 2021. She then opened a braiding school where she teaches young women from ages 10 to 17 to braid hair.

"I've created a safe space for them," said Akins.

In less than a year since the grand opening of the salon and the school, both only operating part time, Akins has made approximately $33,000 in revenue. She believes those numbers will double now that she will be totally committed to her business endeavors.

With the $5,000 that she won, Akins said she plans to invest in her braiding school. "Not only do I want it to be a safe space, but I also want them to have the equipment they deserve to be able to do these styles," she said.

Akins already volunteers her time and services providing free braiding kits, virtual classes and free seminars. In February she gifted 50 braiding kits to future braiders. Remembering how she started off, she said she began with a limited supply.

While Akins was the grand prize winner of the pitch competition, Washington said there were no losers. "The other four all had great proposals who we will work with taking their business to the next level," said Washington, who added that he plans to do this event quarterly.

Lubazibwa said wealth is a process that doesn't happen overnight but is attainable by shifting the mindset, not focusing on income but instead, on assets.

"Entrepreneurship is one of the strategies to start changing the lives in our community," said Lubazibwa. "We need to set value in our community. This is a Black ownership movement. It's a movement, not a moment and we are transforming this community." 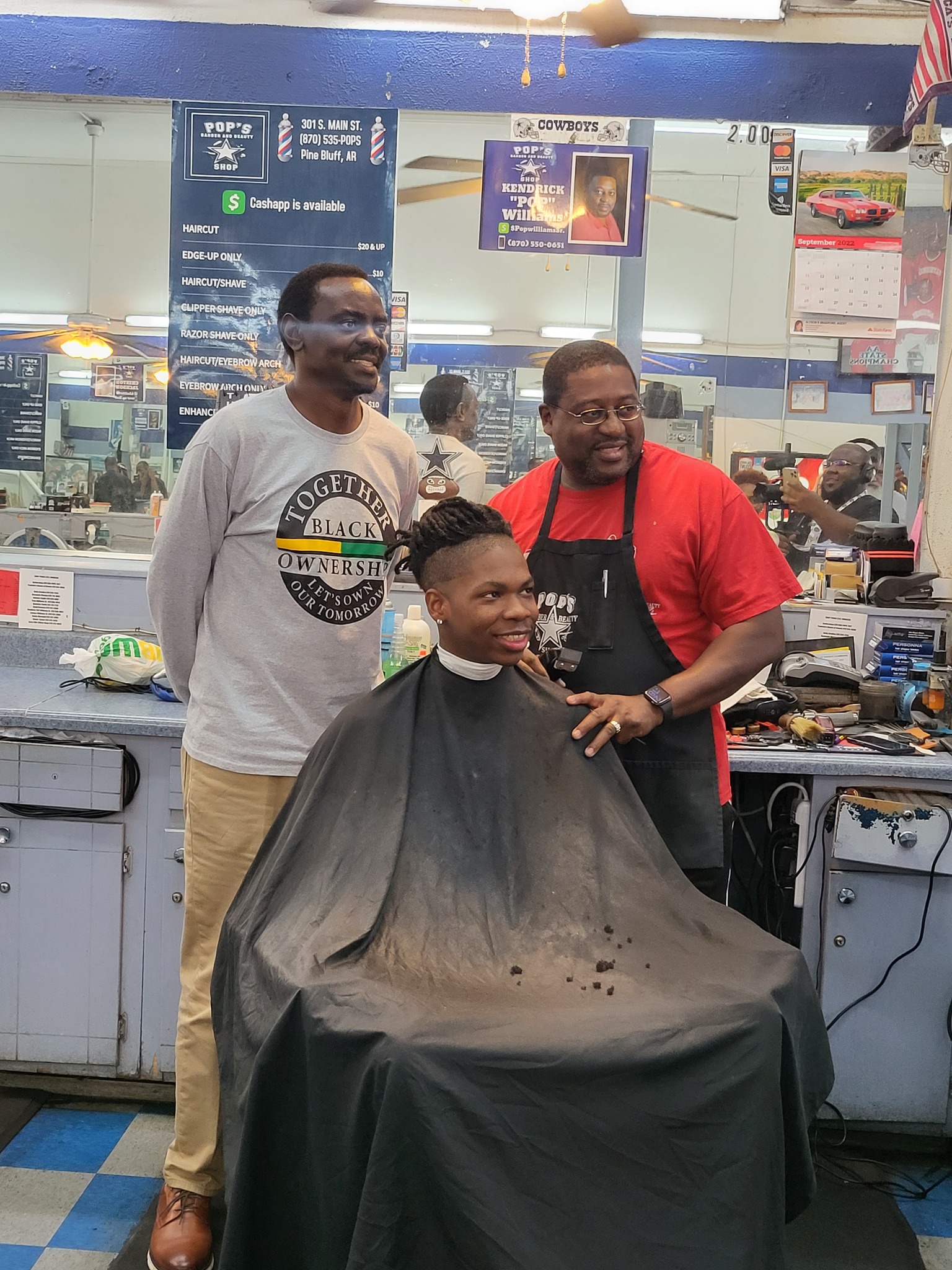