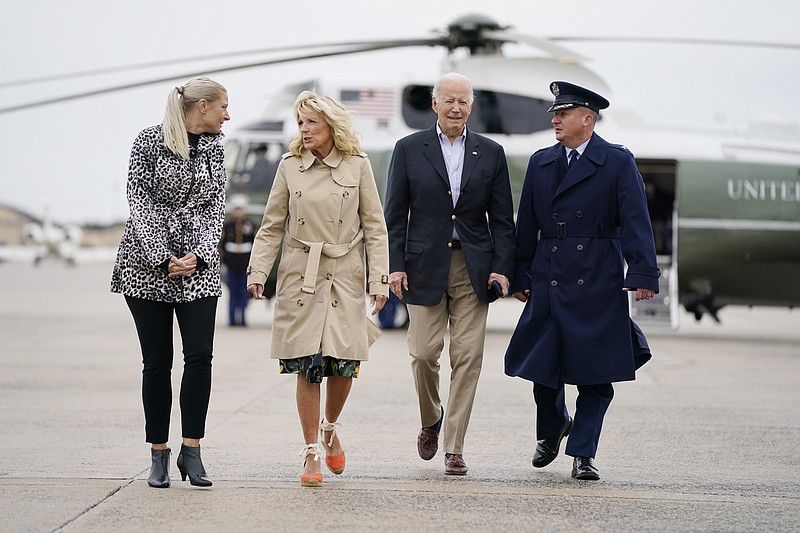 PONCE, Puerto Rico -- President Joe Biden promised to "rebuild it all" while visiting Puerto Rico on Monday, as tens of thousands of people remain without power two weeks after Hurricane Fiona struck and residents worry that Washington's dedication to their recovery could prove fleeting.

"I'm committed to this island," he said after receiving a briefing from local officials, acknowledging that Fiona was only the latest in a string of disasters that have pummeled the U.S. territory in recent years.

"Puerto Ricans are a strong people," Biden said. "But even so, you have had to bear so much, and more than need be, and you haven't gotten the help in a timely way."

The damage from Fiona, which came only five years after the even more powerful Hurricane Maria, will test his administration's ability to help the island of 3.2 million people recover and bolster its defenses. Puerto Rico has a higher poverty rate than any state, and it remains vulnerable to storms that are only becoming more powerful and frequent as climate change continues.

"What happened with this hurricane is that even though it was Category 1, in terms of water it was like Category 4," Puerto Rico's governor, Pedro Pierluisi, told Biden.

Fiona made landfall Sept. 18, knocking out power to the entire island. Although electricity has been restored to 90% of its 1.47 million customers, more than 137,000 others, mostly in the hardest hit areas of Puerto Rico's southern and western regions, continue to struggle in the dark. Another 66,000 customers are without water.

The weather remained ominous during Biden's visit Monday. Thunder rumbled and lightning flashed in the distance.

"I don't want the headline to read, 'Biden brings storm to Puerto Rico,'" he joked. "So I'm gonna maybe have to cut this a little short."

Biden announced that the administration will provide $60 million through last year's bipartisan infrastructure law to help Puerto Rico shore up levees, strengthen flood walls and create a new flood warning system so the island will be better prepared for future storms.

Puerto Rico isn't the only corner of the country that's reeling from disaster. Florida is cleaning up after Hurricane Ian churned across that state last week, killing more than 60 people, decimating some coastal communities and flooding others. Biden plans to visit Florida on Wednesday to survey damage.

"At times like these, our nation comes together, puts aside our political differences and gets to work," Biden said.

The president was accompanied by first lady Jill Biden, who joined volunteers in a sweltering school gymnasium. She helped stuff plastic bags with canned goods, fruit cups, snack packages and rice. Pallets of bottled water were stacked along the wall.

During a 15-minute speech, Biden recognized the string of natural disasters Puerto Rico has faced in recent years, including Hurricane Maria, which killed thousands in 2017 and left residents grappling with difficult living conditions.

"Yet somehow the people of Puerto Rico keep getting back up with resilience and determination," Biden said. "Quite frankly, it's pretty extraordinary when you look at it from afar."

Biden also mentioned Puerto Rico's vulnerable power grid, which has blackouts even when there are no emergencies, and said his administration was "particularly focused" on the issue.

The president also reflected on what he described as a longstanding personal relationship with the territory, saying his home state of Delaware has a large share of Puerto Rican residents.

"I was sort of raised in the Puerto Rican community at home, politically," the president said.

While introducing Biden, Pierluisi said the president is committed to the island and said he had briefed Biden on how the recovery from Fiona is going.

The governor added that he had requested that the president amend the major disaster declaration to provide "100% funding for debris removal, emergency, protective measures and direct federal assistance" for another six months.

"My asks to you, Mr. President, are straightforward. We want to be treated in the same way as our fellow Americans in the states in times of need," said the island's top official.

Little storm damage was visible during Biden's few hours on the ground in Puerto Rico after he touched down in Ponce, a city on the southern coast.

Fiona caused catastrophic flooding, tore apart roads and bridges and unleashed more than 100 landslides when it hit Puerto Rico on Sept. 18. At least two people died after being swept away by floods, and several others were killed in accidents related to the use of candles or generators during the island-wide power outage.

Government officials have estimated some $3 billion in damages, but warn that costs could rise significantly as evaluations continue.

Some people in Puerto Rico wondered whether Biden's visit would change anything as they recalled how President Donald Trump visited after Hurricane Maria hit as a more powerful Category 4 storm in 2017, and tossed rolls of paper towels into a crowd in a display that riled many.

"We know that there may have been some issues in the previous administration," said Deanne Criswell, the Federal Emergency Management Agency administrator who joined Biden on his trip. "We are laser-focused on giving them the support they need."

Criswell, who said FEMA personnel were sent to the island before the storm and will remain there to help with recovery, visited Puerto Rico shortly after Fiona struck.

"They finally feel like this administration cares for them, and that they're going to be there for them to support them through this response and recovery effort," she said.

There's entrenched skepticism in some areas of the island that anything will change.

Manuel Veguilla, a 63-year-old retired mechanic who lives in a remote community in the hard-hit northern mountain town of Caguas, said he didn't expect his life to improve in the aftermath of Fiona, which cut off his neighborhood from any help for a week.

"They always offer the lollipop to the kids," he said, referring to Biden's visit. "But in the end, the outcome is always the same. The aid goes to those who have the most."

Pierluisi asked for the funding to last for 180 days.

In his remarks, Biden said, "I'm confident we're going to be able to do all you want, governor."

Information for this article was contributed by Seung Min Kim, Darlene Superville, Danica Coto and Chris Megerian of The Associated Press and by Syra Ortiz-Blanes and Alex Roarty of The Miami Herald (TNS). 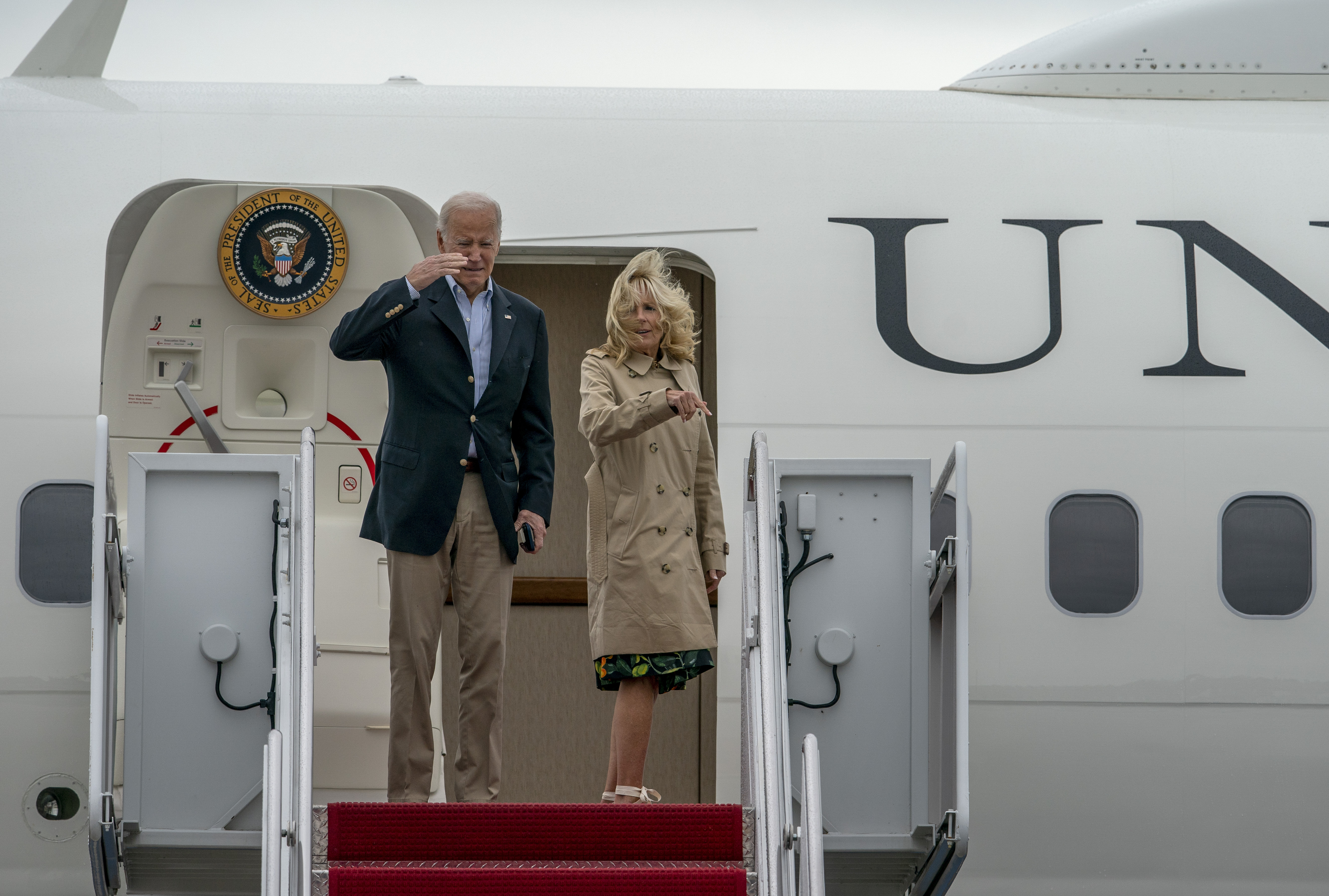 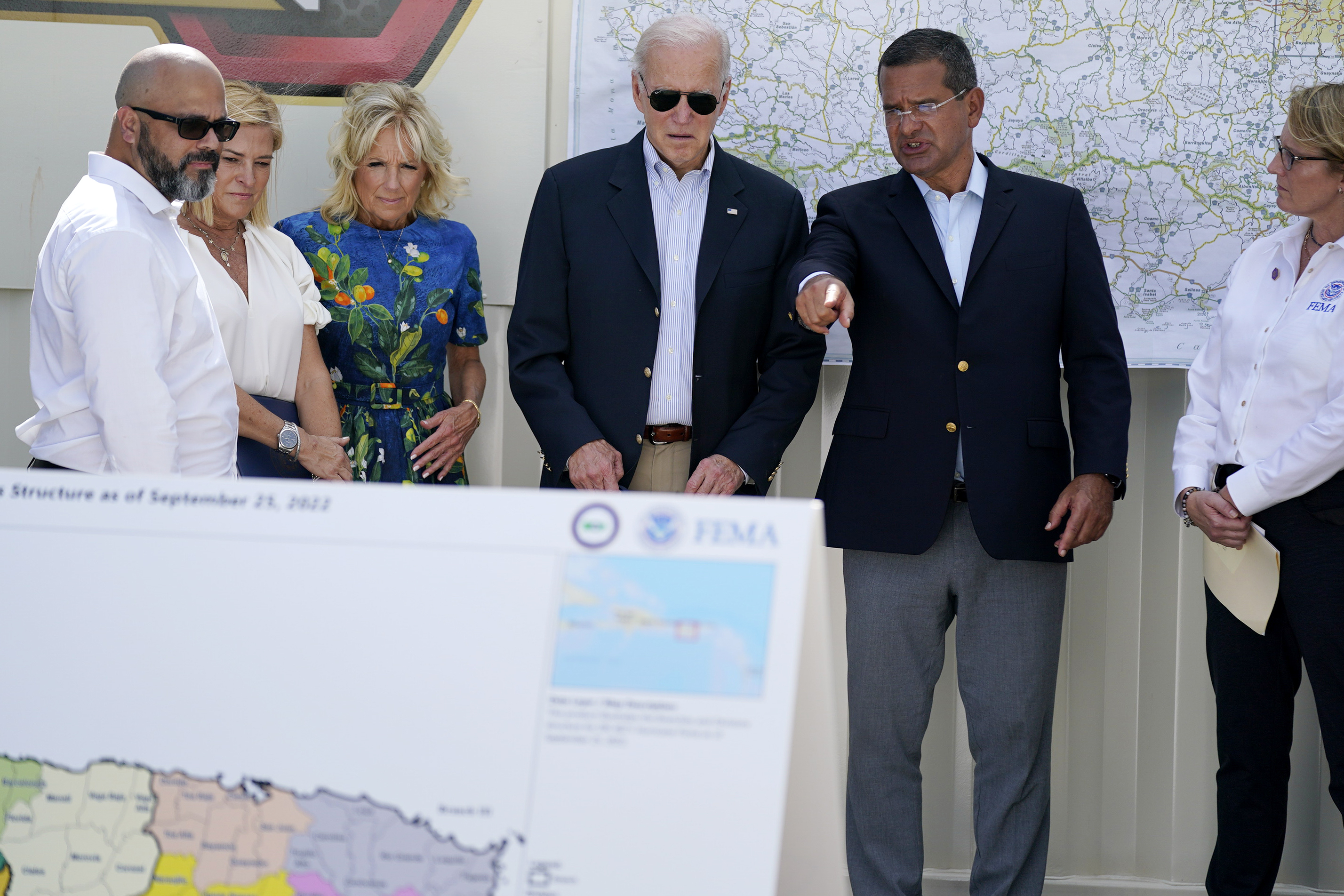 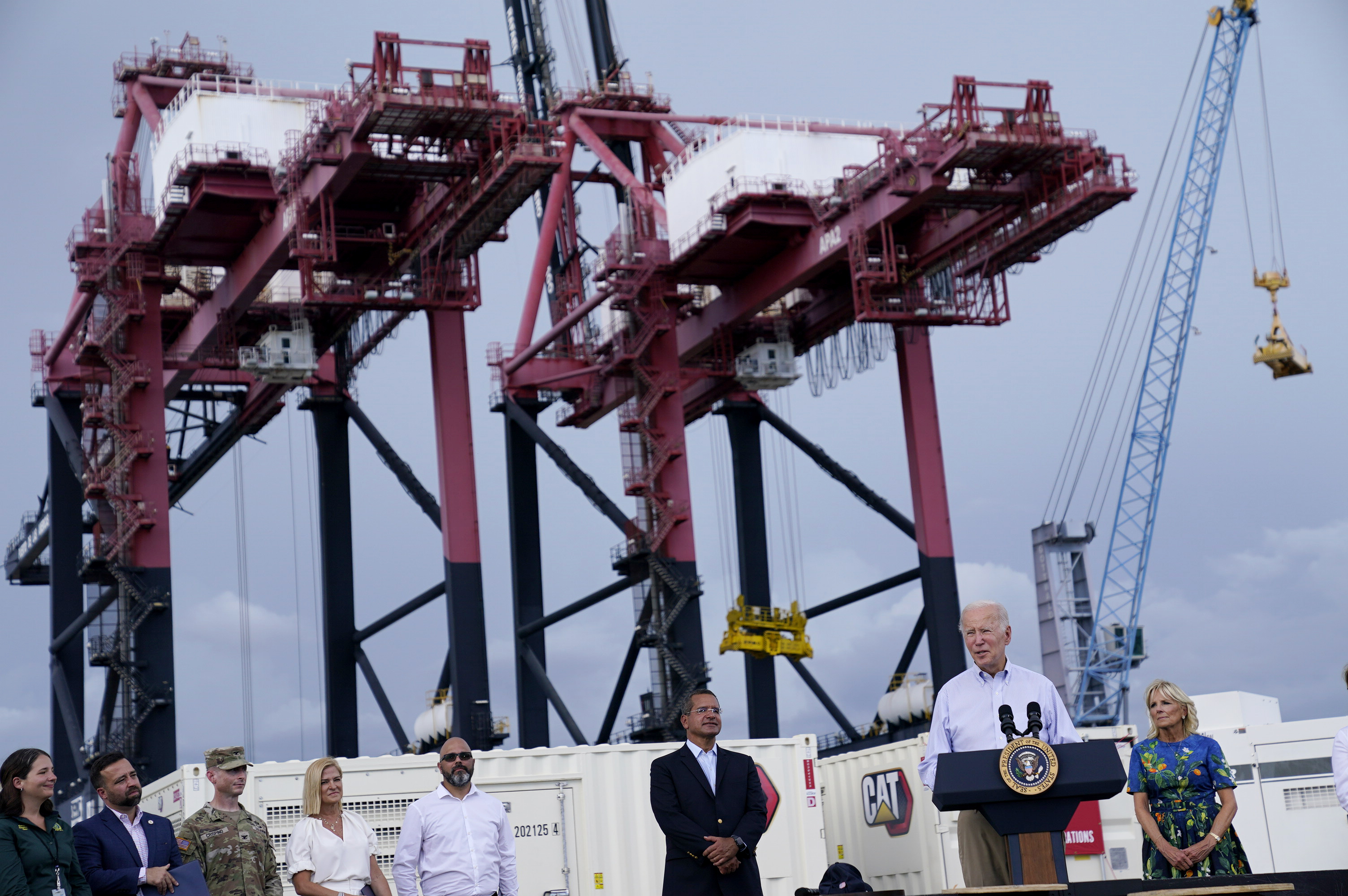 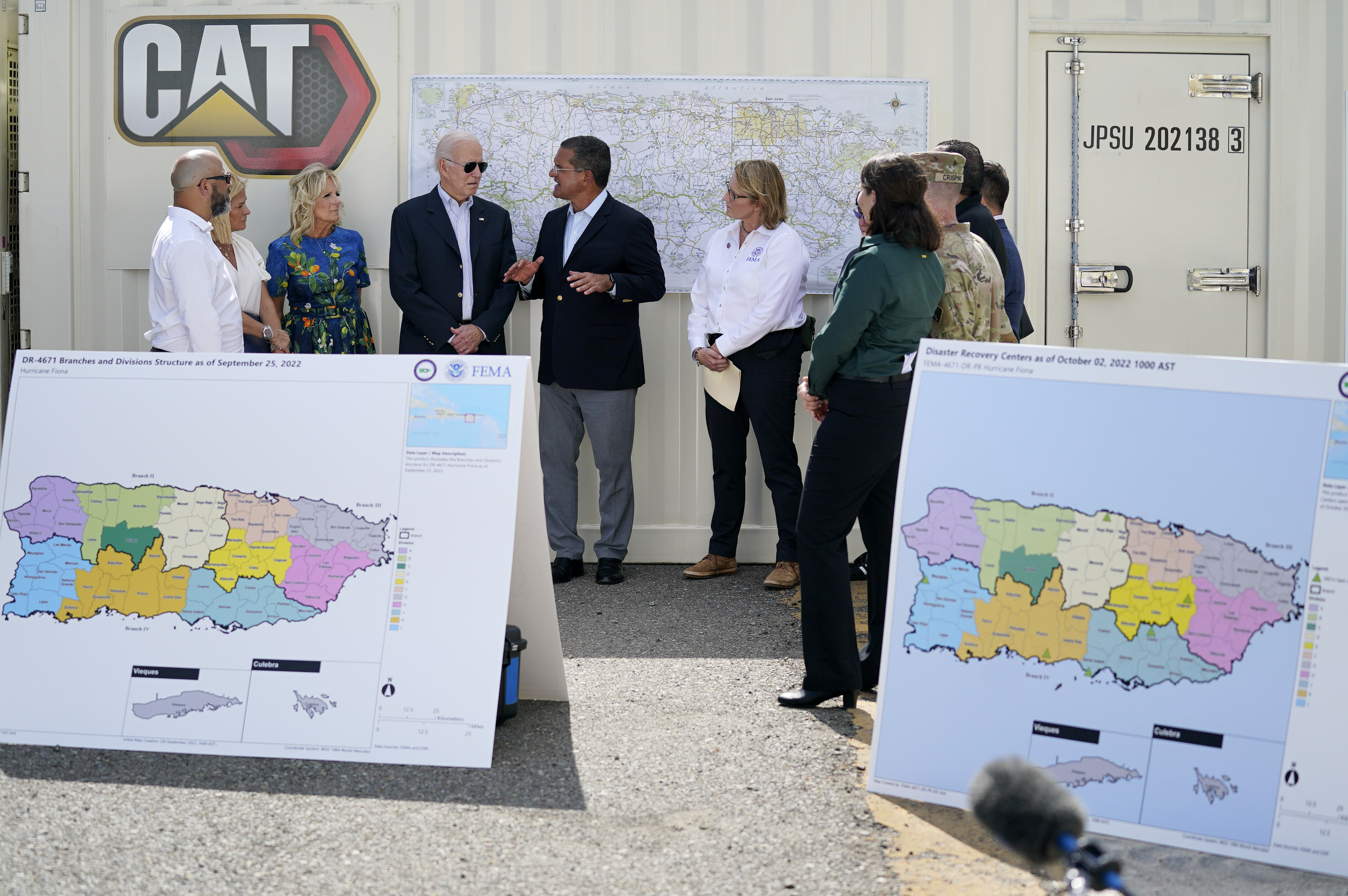 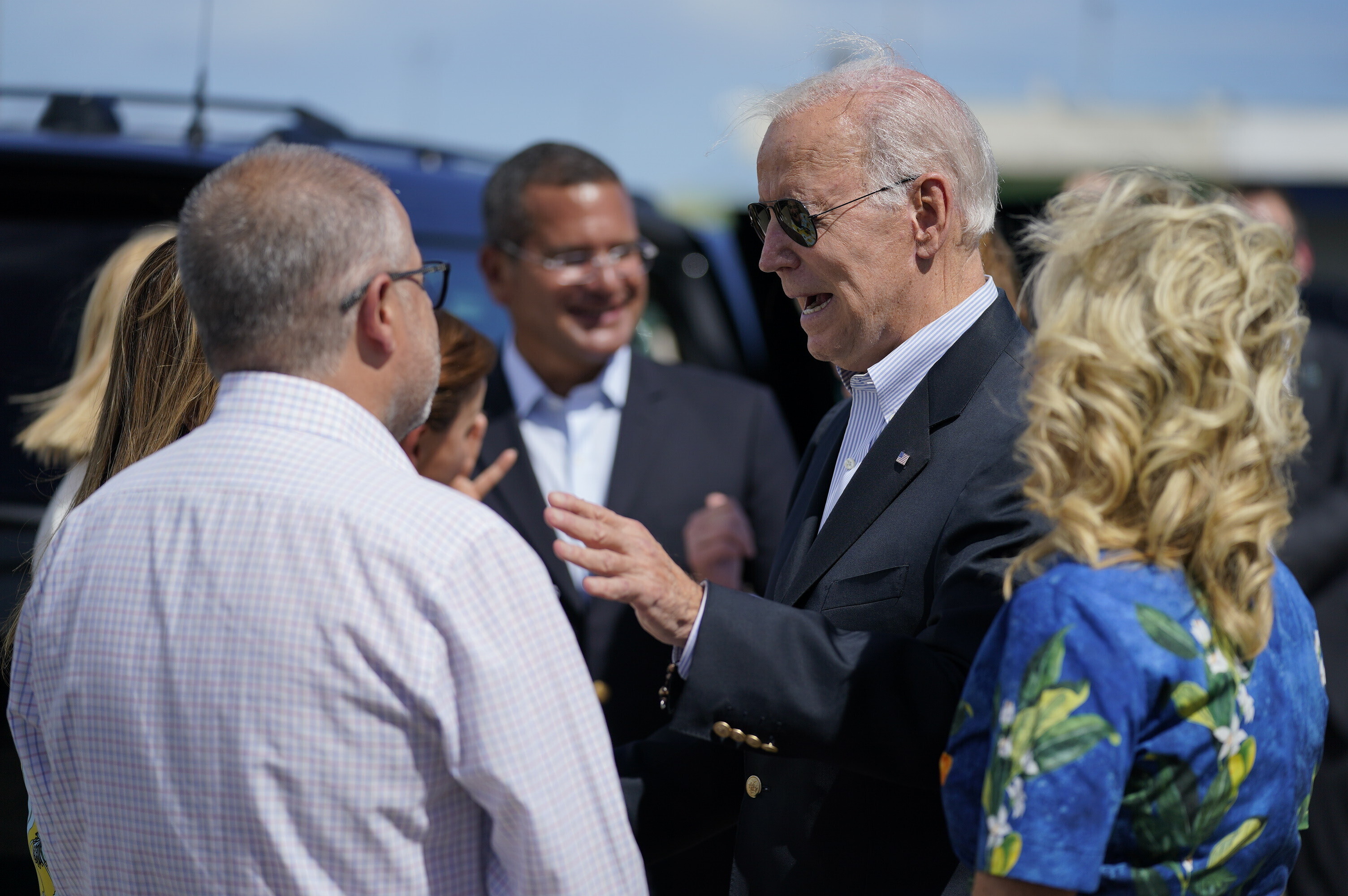 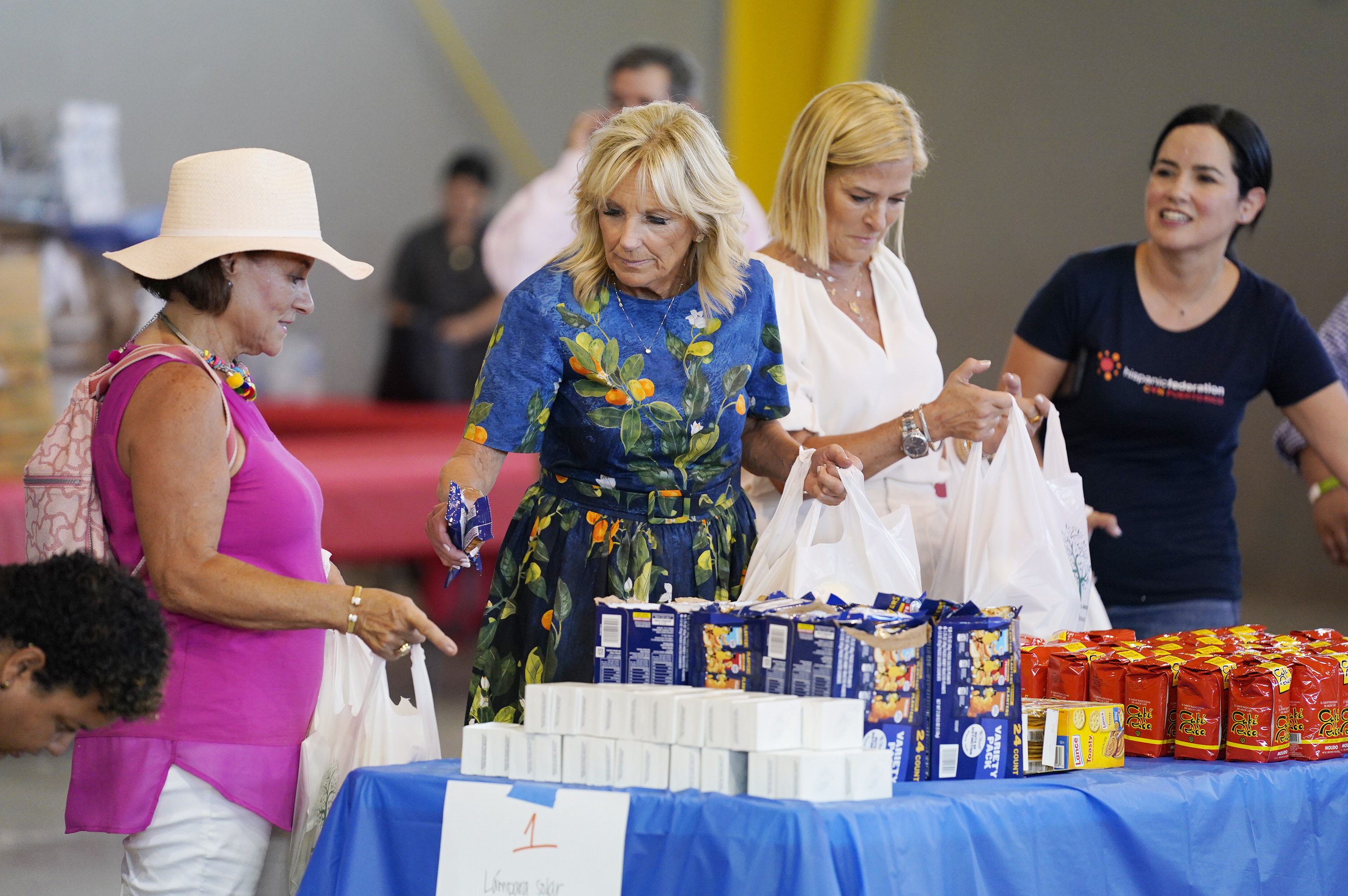 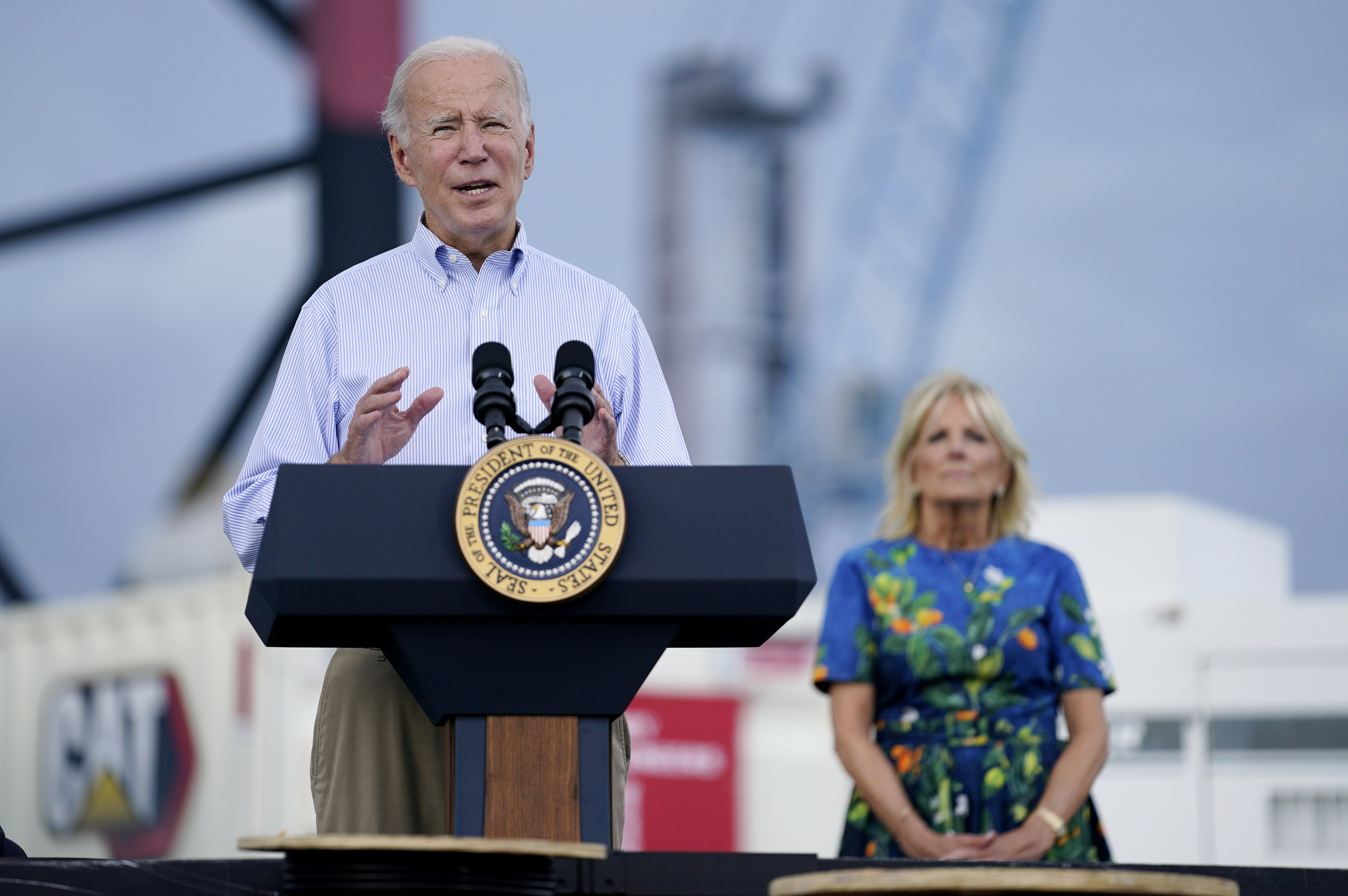 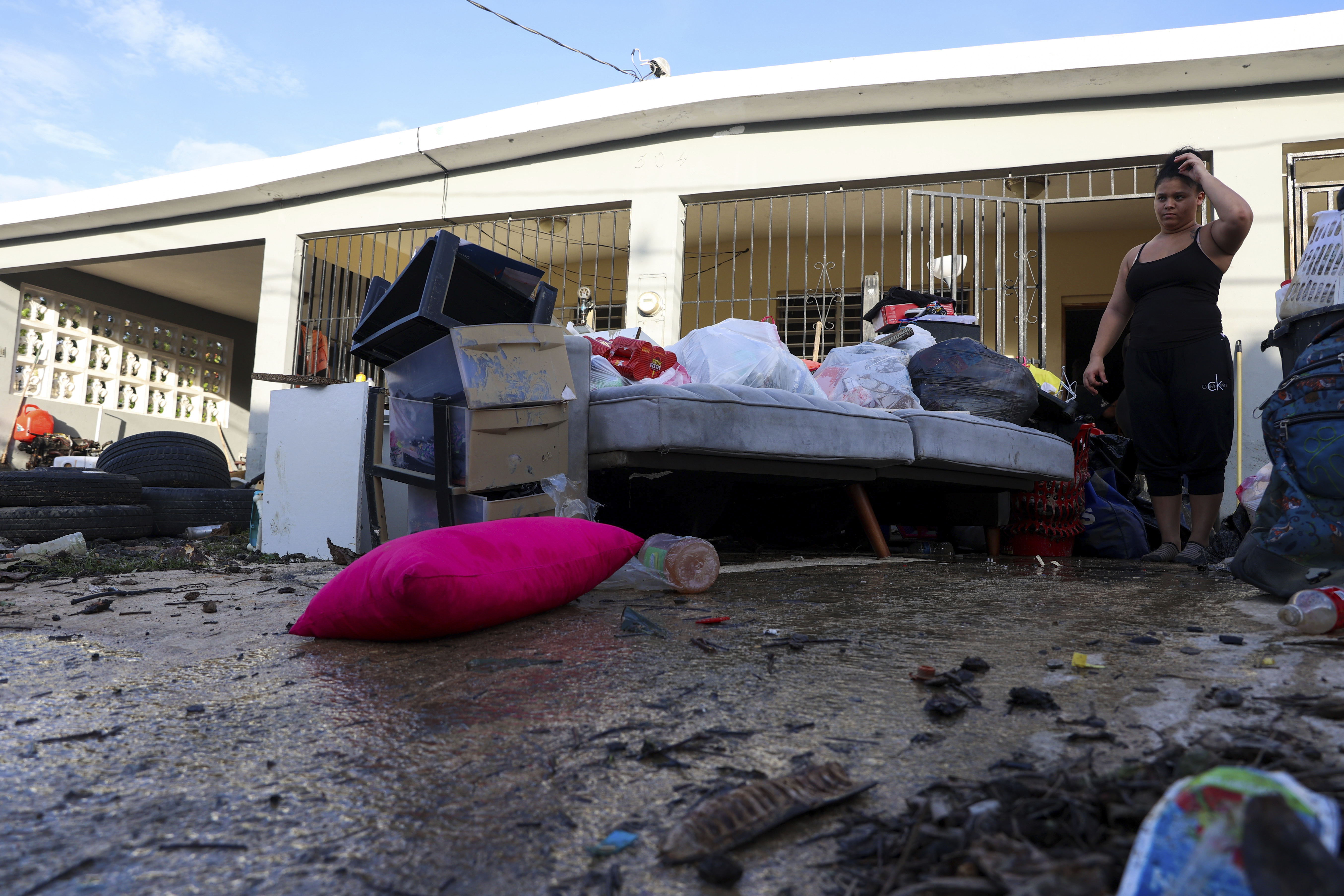 FILE - A woman looks at her water-damaged belongings after flooding caused by Hurricane Fiona tore through her home in Toa Baja, Puerto Rico, Tuesday, Sept. 20, 2022. On Monday, Oct. 3, 2022, President Joe Biden will survey damage from Hurricane Fiona in Puerto Rico, where tens of thousands of people are still without power two weeks after the storm hit. (AP Photo/Stephanie Rojas, File) 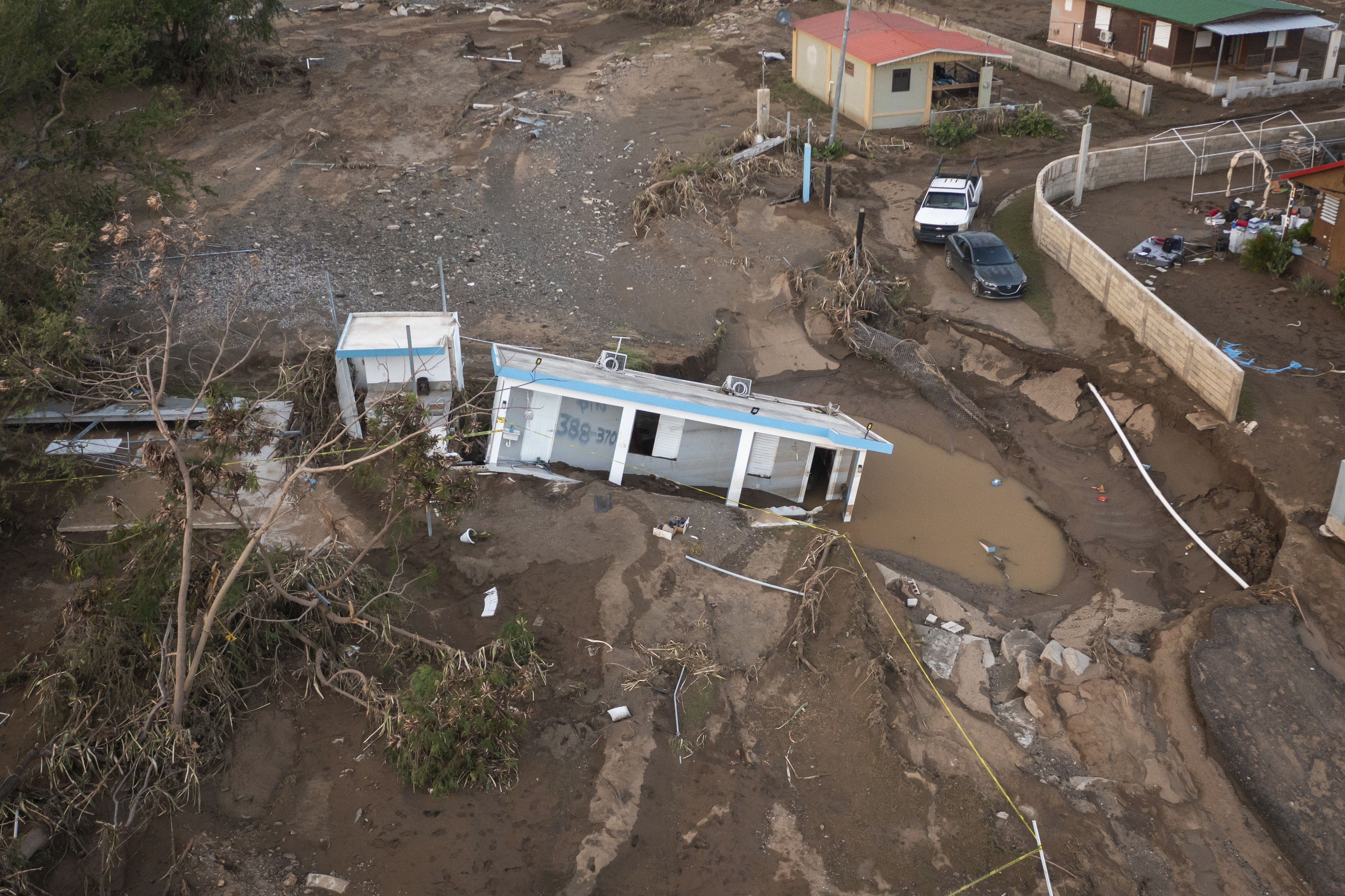 FILE - A house lies in the mud after it was washed away by Hurricane Fiona at Villa Esperanza in Salinas, Puerto Rico, Wednesday, Sept. 21, 2022. On Monday, Oct. 3, 2022, President Joe Biden will survey damage from Hurricane Fiona in Puerto Rico, where tens of thousands of people are still without power two weeks after the storm hit. (AP Photo/Alejandro Granadillo, File)