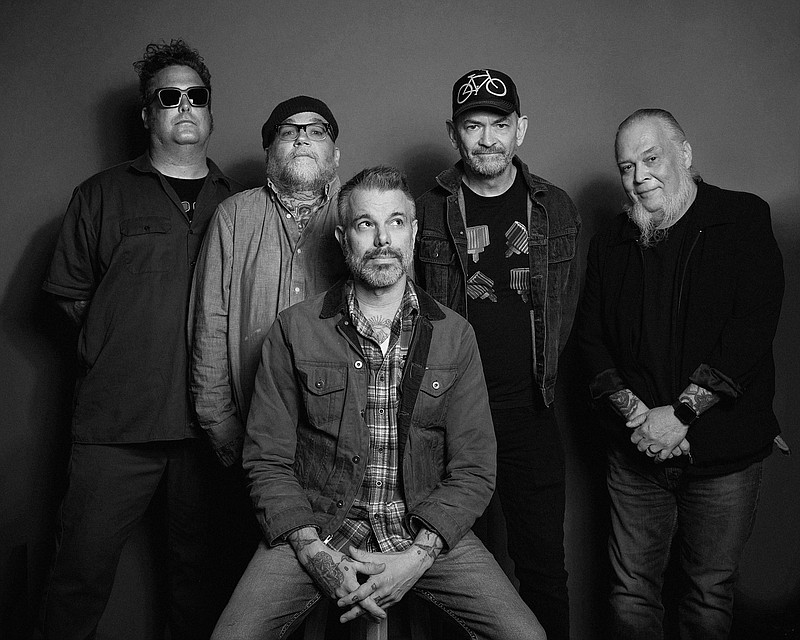 Nichols, a Little Rock native and Central High School grad, has returned home plenty of times over the years for shows with his Lucero band mates. On Thursday, the group headlines a set at The Hall, with L.A. Edwards opening.

"I love any chance I get to come back to Little Rock," he says. "The audience there is real nice to us, and it feels like a hometown show. We were at the Rev Room back in November ... the whole audience just felt like family."

This tour will also find the band back at the legendary Ryman Auditorium in Nashville, Tenn.

"The first time we played there [in 2017] we opened for Steve Earle," Nichols says. "To play the Ryman, with all its history, and with someone like Steve Earle, who has been a hero of mine for such a long time, that was a big day. And now it's nice to go back there and play our own show."

Nichols formed Lucero in the late '90s with guitarist Brian Venable in Memphis. The lineup solidified with drummer Roy Berry and bassist John C. Stubblefield (keyboardist Rick Steff, a key addition to the band, would sign on several years later). Armed with Nichols' songs of boozy nights, heartache, celebration and missed chances — slices from his own life and vivid character studies — the band toured relentlessly and built a following with its scruffy concoction of punk, folk, country and Southern rock on albums like "Tennessee," "That Much Further West," "Nobody's Darlings" and "Rebels, Rogues & Sworn Brothers."

They added horns and expanded their sound on "1372 Overton Park" and "Women & Work." The band's most recent studio albums are 2018's "Among the Ghosts" and last year's "When You Found Me." Two concert albums, "Live From Red Rocks" and "Nobody's Darlings (Live from Memphis)" were also released in 2021.

There is new music on the way, says Nichols, who now lives in rural Ohio with his wife, Nina, and daughter Izzy. By the time you read this a new song, "One Last FU," should be out. It's the first in a planned series of singles to be released in advance of a new LP, "Should Have Learned by Now," which drops in February.

"The last couple of albums have been kind of dark and serious," Nichols says. "That's the stuff I like to listen to, but I have kind of a split personality. The whole time I was writing those records I was also writing more upbeat, poppy, goofy, rock songs. I thought those needed a home, so I wrote some more in that vein and it became 'Should Have Learned by Now.'"

Recorded in Memphis with Matt Ross-Spang, who produced "Among the Ghosts" and "When You Found Me," the new record "is more of a straight ahead rock 'n' roll record. It's got more of a surly attitude, but in a fun way," Nichols says.

Lucero has been together since the last days of the Clinton administration, and the momentum is still strong.

"We've learned to give each other space," Nichols says of how the band has stayed together. "This new record is sort of about making the best out of what you've got, and I think that's one thing Lucero has been good at. We're not the greatest guitar players, we're not virtuosos. We started off just barely knowing how to play, but I liked writing good songs with lyrics that at least didn't ruin the music. We kept it simple, kept it going and learned to stay out of each other's way."