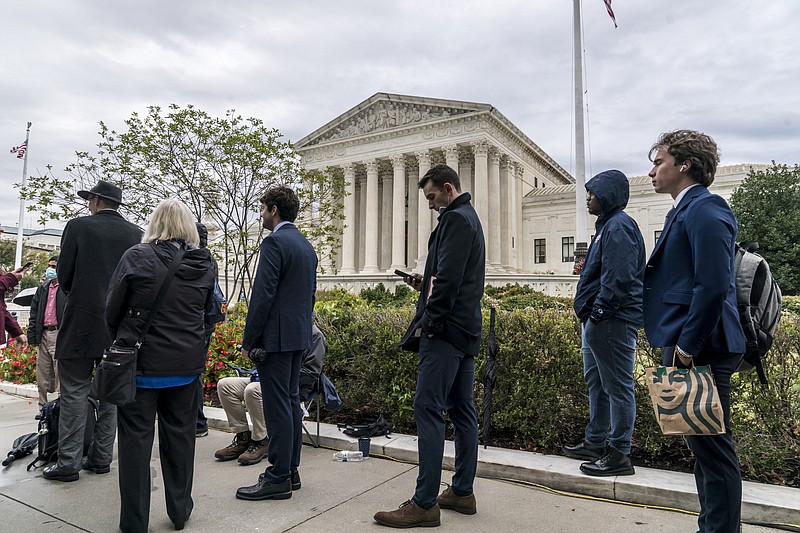 WASHINGTON -- The Supreme Court began its new term Monday with a new justice on the bench, the public back in the courtroom and a spirited debate in a case that pits environmental protections against property rights.

The new member of the court, Justice Ketanji Brown Jackson, wasted no time engaging, asking questions throughout nearly two hours of arguments in the dispute over the nation's main anti-water-pollution law, the Clean Water Act.

Jackson, the court's first Black female justice, seemed to be generally aligned with the court's other liberal justices in favor of Justice Department arguments to preserve the authority of the federal government to regulate wetlands under the Clean Water Act against a business-backed challenge.

If Jackson was eager to show she was ready to participate, several conservative justices also provided a quick reminder of the balance of power on a court where they hold a 6-3 majority.

They asked questions that were more skeptical of the regulation in a case that tests the reach of the law beyond rivers, lakes and streams.

One issue in the case is how far wetlands can be from a larger body of water and still be subject to regulation.

Jackson said she wanted to know "why would Congress draw the coverage line between abutting wetlands and neighboring wetlands when the objective of the statute is to ensure the chemical, physical, and biological integrity of the nation's waters?"

Under an opinion written by retired Justice Anthony Kennedy in 2006, regulators can require permits before allowing development on properties that don't abut waterways as long as they prove a significant connection to the waterways.

Kennedy, who retired in 2018, was in the courtroom to hear some conservative justices appear to agree with the lawyer for an Idaho couple that Kennedy's opinion was vague and unworkable.

"What does that mean?" Roberts asked at one point.

Justices Clarence Thomas, Samuel Alito and Neil Gorsuch, who once was a law clerk to Kennedy, also appeared inclined to side with Chantell and Michael Sackett, who have wanted to build a home close to Priest Lake in Idaho for 16 years and won an earlier round in their legal fight at the Supreme Court.

The Idaho couple are represented by the conservative Pacific Legal Foundation and backed by a long list of business organizations, homebuilders and agricultural groups that say the government's regulations are muddled, time-consuming and costly to follow.

Justices Neil M. Gorsuch and Samuel A. Alito Jr. expressed the most skepticism about how broadly the government defines wetlands subject to regulation, offering pointed questions for the government's lawyer, Brian H. Fletcher.

Gorsuch asked, "How does any reasonable person know whether or not their land is covered? Is the property subject to regulation if it is located three miles or two miles from waters subject to federal jurisdiction," he pressed Fletcher. "So, if the federal government doesn't know, how is a person subject to criminal time in federal prison supposed to know?"

Jackson, sitting for her first oral argument, was an active questioner and pushed back against suggestions that the regulations are unfair to property owners or would likely result in criminal penalties.

"Shouldn't they have gathered information prior to purchasing?" Jackson asked the Sacketts' attorney.

Fifteen years ago, the couple obtained a local building permit to begin construction on their land about 300 feet from the lake, a plot bounded on two sides by roads and separated by a row of lakefront homes. The Environmental Protection Agency put those plans on hold.

The agency said the property contains sensitive wetlands, which are among the "waters of the United States" and subject to permitting requirements. The government threatened fines of more than $40,000 per day if the couple did not stop construction. The couple went to court to block the EPA order and now wants the justices to narrow the definition of "waters of the United States" so that their land is not covered by the Clean Water Act.

The Biden administration and environmental groups say narrowing the reach of the law would undermine the government's ability to protect wetlands that are separated from a river, for instance, by a small dune but still affect a river's chemical, physical and biological integrity.

In 2012, the justices unanimously sided with the Sacketts, allowing them to immediately challenge the EPA order before the agency took enforcement action. Alito noted in a concurring opinion that the scope of the law is "notoriously unclear" and expressed sympathy for the homeowners.

"Any piece of land that is wet at least part of the year is in danger of being classified by EPA employees as wetlands covered by the act, and according to the federal government, if property owners begin to construct a home on a lot that the agency thinks possesses the requisite wetness, the property owners are at the agency's mercy," Alito wrote.

The justices are now reviewing a 2021 ruling from the U.S. Court of Appeals for the 9th Circuit, which sided with the EPA. The appeals court said the record shows that water from the wetlands, which filter out pollutants, makes its way into the lake via a tributary and creek. The opinion quotes an EPA memo, which found the wetlands "especially important in maintaining the high quality of Priest Lake's water, fish, and wildlife."

A key question for the justices is how to determine how far from the water's edge the Clean Water Act applies. The court's three liberal justices along with Justice Brett Kavanaugh emphasized in their questions Monday that Congress clearly intended to regulate wetlands "adjacent" to regulated waters.

Kavanaugh noted in questioning the Sacketts' attorney that presidents in both political parties had interpreted the law to cover neighboring wetlands.

"Why did seven straight administrations not agree with you?" he asked.

PUBLIC ALLOWED IN DURING ARGUMENTS

Monday's arguments were the first time the justices were back hearing cases since issuing a landmark ruling stripping away women's constitutional protections for abortion. And for the first time in 2½ years, since the court closed in March 2020 because of the coronavirus pandemic, the public was allowed inside the courtroom, although the court is continuing to provide live audio of arguments on its website.

Because of the pandemic the court is still closed to the public outside of arguments. And two justices wore masks in court Monday: Justice Sonia Sotomayor, who has diabetes and has worn a mask in court consistently during the pandemic, and Justice Elena Kagan, who the court said tested negative for covid-19 but had been exposed to someone with the virus.

Also hanging over the justices is some unfinished business from last term: the leak of a draft of the abortion decision seven weeks before it was formally announced. Roberts ordered an investigation, but the court has yet to provide an update.

Jackson, for her part, has been waiting for months to fully begin her new role since being confirmed in April and sworn in when Justice Stephen Breyer retired in June.

Jackson's husband, Patrick, and her parents were in the audience Monday, as were the parents of Kavanaugh, and his wife, Ashley.

In addition to the abortion ruling, the court also expanded gun rights, reined in the government's ability to fight climate change and blocked a Biden administration effort to get workers at large companies vaccinated against covid-19.

This term's significant cases include a struggle over whether Alabama must draw an additional Black majority congressional district, set for arguments today, and a controversial Republican-led appeal that could dramatically change the way elections for Congress and the presidency are conducted by handing more power to state legislatures. There's also the case of a Colorado website designer who says her religious beliefs prevent her working with same-sex couples on their weddings. Later this month, the justices will hear a challenge to the consideration of race in college admissions.

Information for this article was contributed by Jessica Gresko and Mark Sheman of The Associated Press and by Ann E. Marimow of The Washington Post. 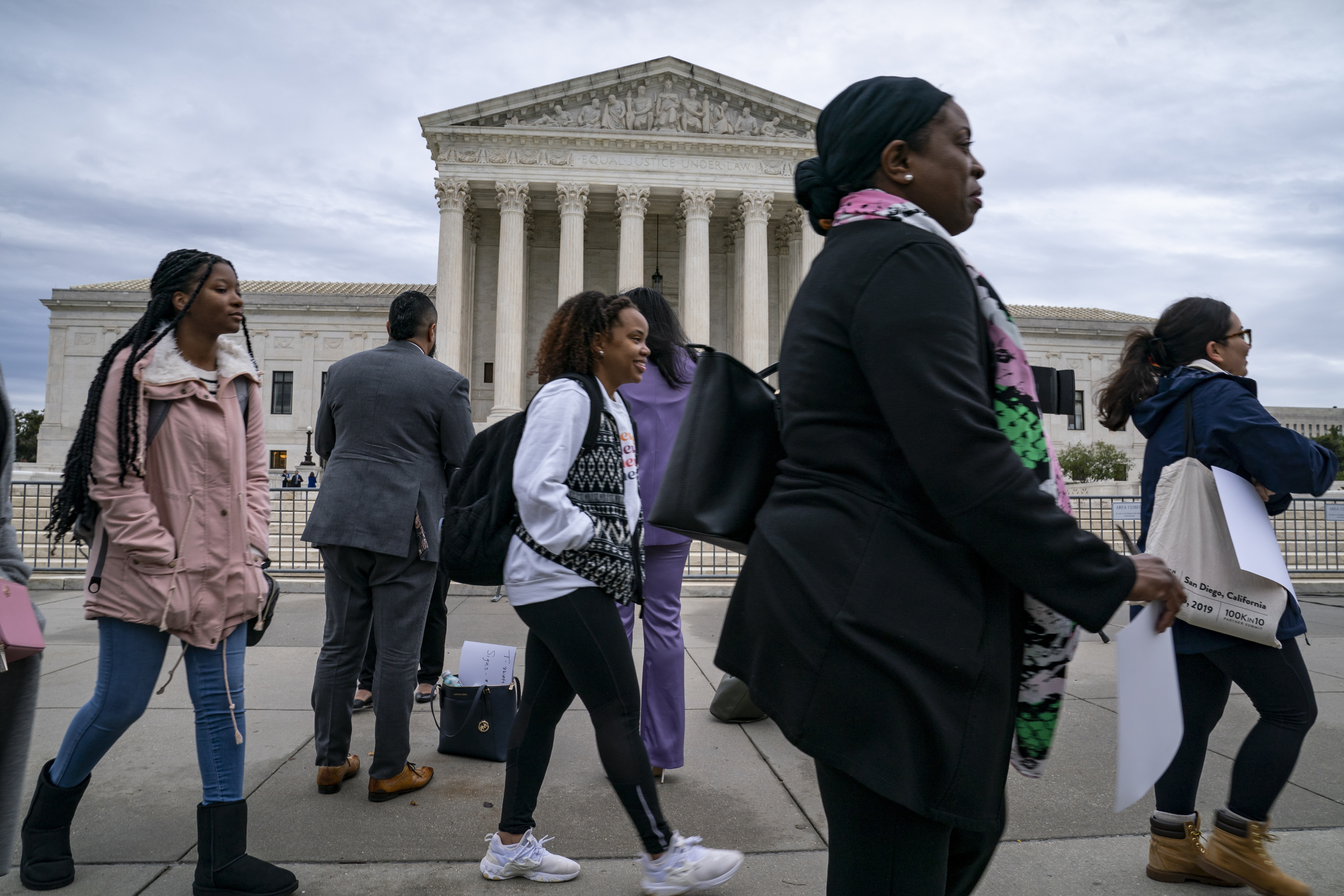 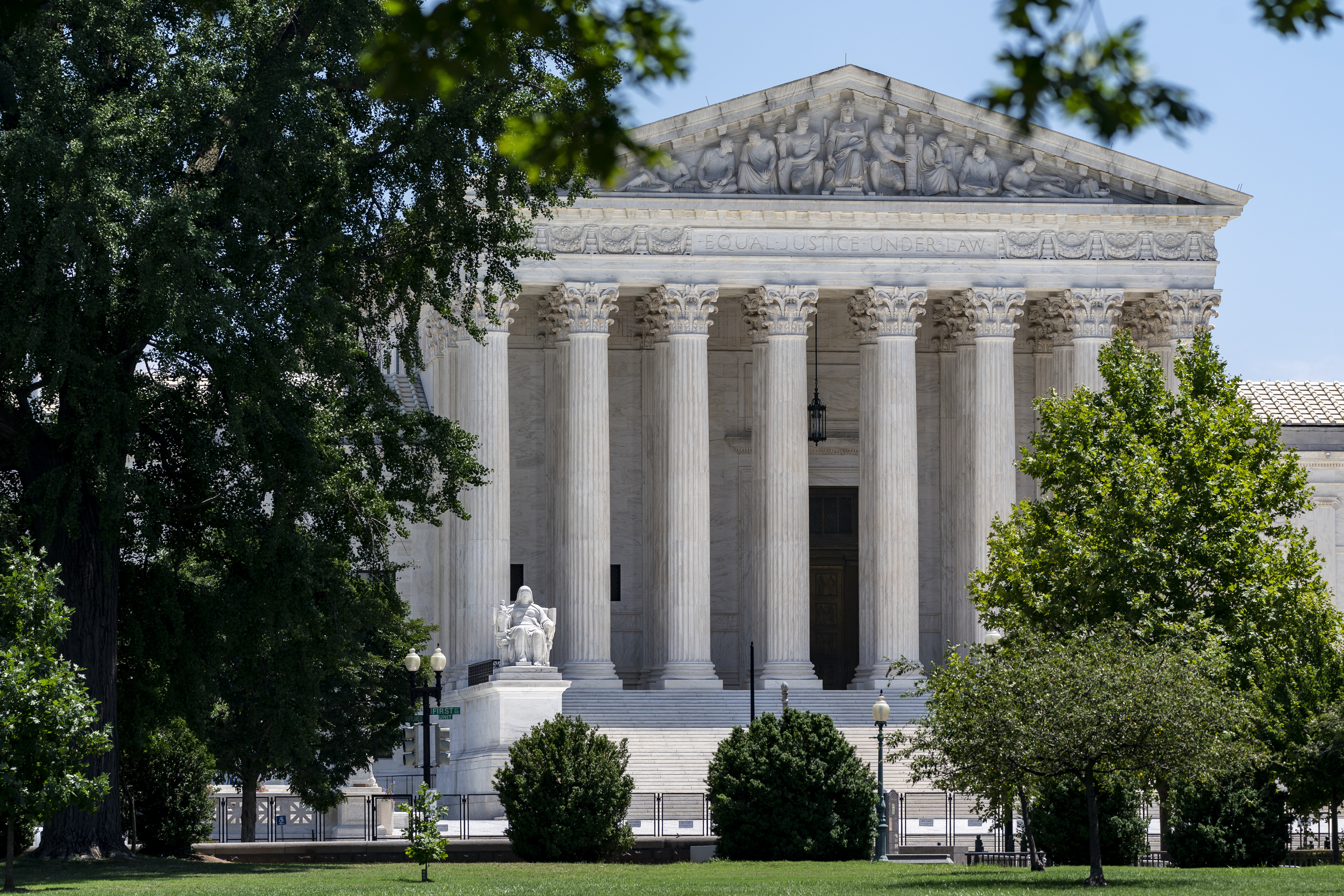 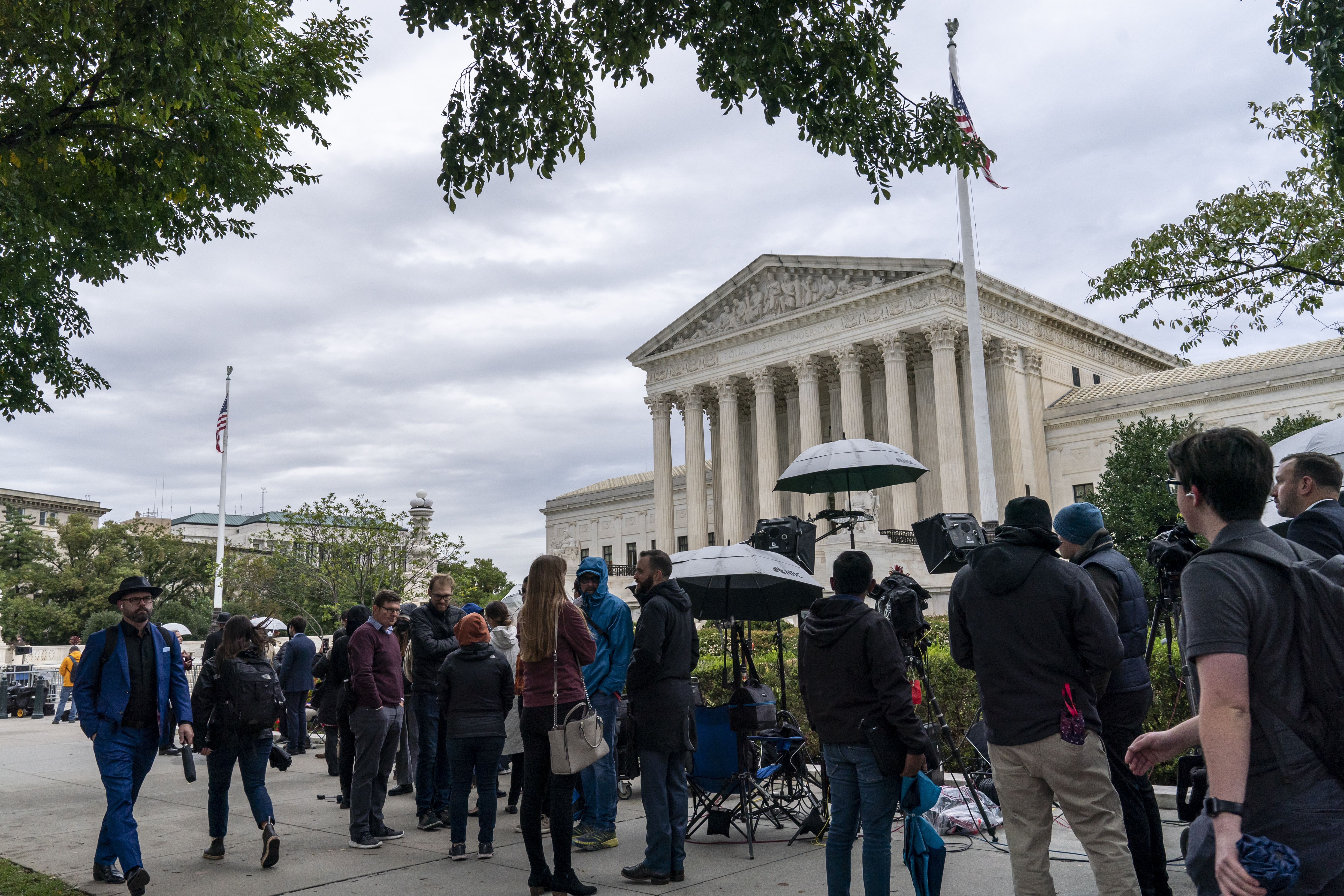 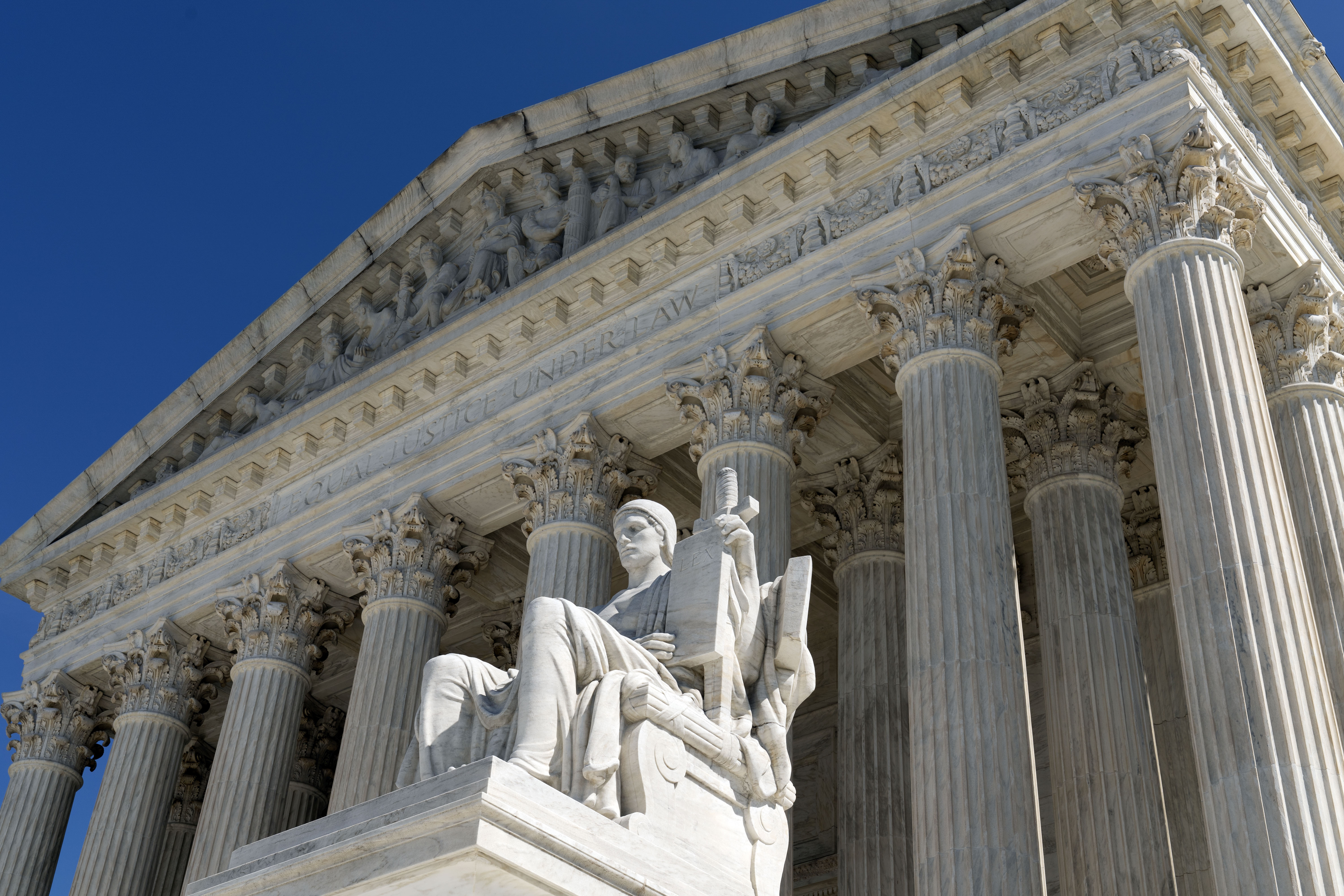 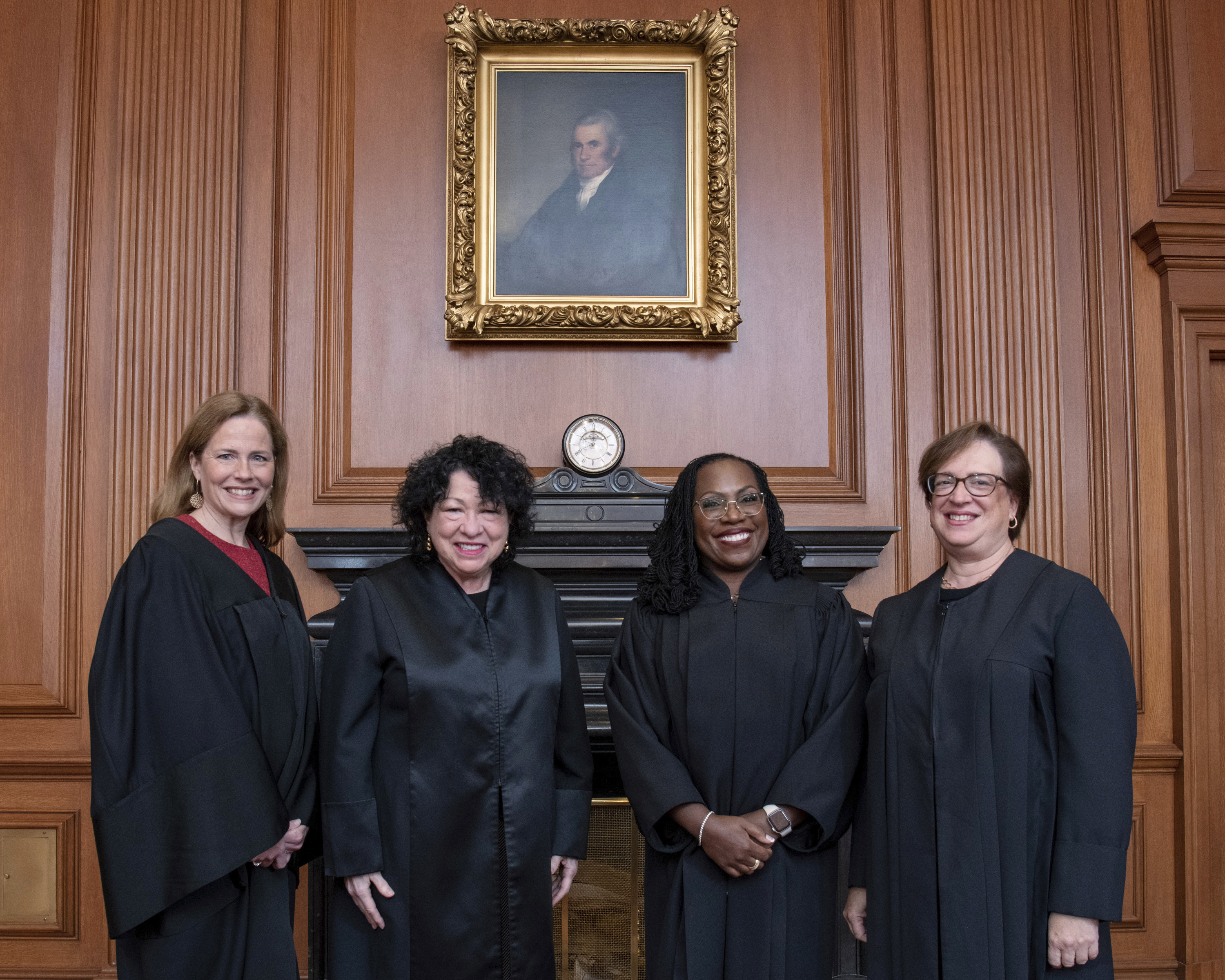 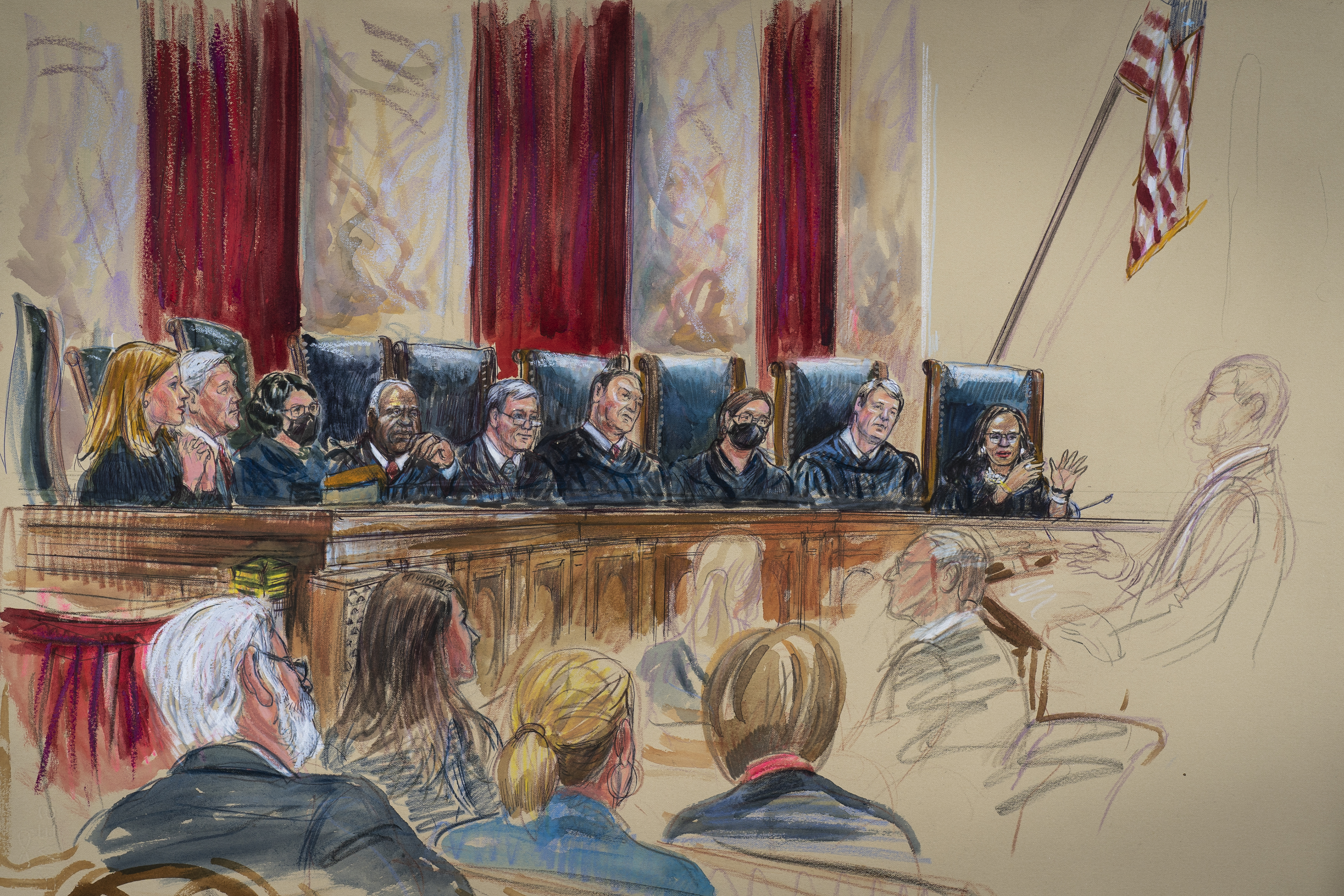