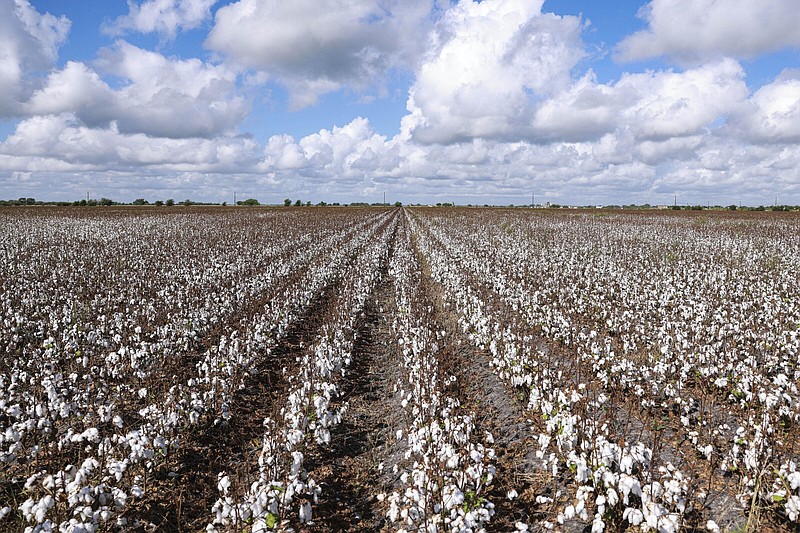 During a normal growing year, the tops of cotton plants like these at Brian Adamek's farm in Victoria would be full of cotton. This year s harvest had bottom-heavy cotton plants.

FAYETTEVILLE — Almost no measurable rain for more than a month — and none in the immediate forecast — has counties instituting burn bans and farmers anxiously watching their hay stocks.

The National Weather Service says Northwest Arkansas is in moderate drought conditions and it’s expected to persist for some time. There’s also a high fire danger.

“It’s horrible,” said Johnny Gunsaulis, extension agent in Benton County. “In my mind, it’s worse now than it was earlier in the year, it’s just that it’s cooler. But, the ground is dry and the ponds are down.”

Gunsaulis said the last rain of any significance was in early September and not everyone in Northwest Arkansas got that rain.

“There are places that have been drier through the whole thing than others, and so it’s in pretty bad shape out there,” Gunsaulis said. “We need another little respite.”

Rainfall totals for September show 1.28 inches fell at Drake Field, compared to an average of 3.8 inches for the month.

Gunsaulis said he deals mostly with cattle producers, and they got a little reprieve with rain during August, which helped hay producers get a third cutting for the year. Pastures now are drying up, and farmers may have to start feeding their animals hay earlier in the year than normal.

“There’s probably a lot of people that are just a few days from it if they’re not already,” Gunsaulis said. “Everybody that’s relying on either something that’s grown outside or running their animals on pasture, they’re all affected right now.”

Gunsaulis said if farmers can keep their livestock on pasture and don’t have to start feeding hay right now, most should be able to make it through the winter on the hay that’s locally available.

Gunsaulis said there is some drought relief money available through the U.S. Department of Agriculture Farm Service Agency that farmers can apply for to help offset feed costs. The money currently available was released earlier in the year to help with earlier drought conditions, but Gunsaulis said he thinks more money may be made available for aid with fall drought conditions. More information is available by calling the agency’s local office, (479) 521-4520.

Gunsaulis said all farmers can do at the moment is try to hang on.

“I think it’s affecting the markets at the sale barn; they’ve dropped off some,” Gunsaulis said.

All the counties in Northwest Arkansas have burn bans in place as of Tuesday, according to state officials.

On Tuesday, 58 of the 75 counties in the state had burn bans, according to the state’s website. Most of the 17 counties not under a ban are in north-central and northeast Arkansas and along the Mississippi River in far east Arkansas. Three are in the far southwest corner of the state.

That means campers at state parks in those counties with burn bans can’t have open flame fires to roast their weenies or melt their s’mores, according to Monika Rued, public information officer with Arkansas State Parks. Charcoal fires in stand up grills are allowed, at least for now, she said.

Northwest Arkansas does have plenty of water in Beaver Lake because of all the rain the region got earlier this year, according to Lane Crider, CEO at Beaver Water District, which provides clean water for most of the area.

Crider said Beaver Water District was consistently pumping about 80 million gallons of water per day out to customers at the end of September, up from about 65 million gallons a day prepandemic. He said that consumption is directly related to increasing population in the region, which is driving up base water usage.

Here are the monthly rainfall totals so far this year and the average totals since 1950 as measured by the National Weather Service station at Drake Field in Fayetteville. Totals are in inches. There has been no measurable precipitation this month. The last significant rainfall observed was 1.13 inches on Sept. 2, although 0.01 inches was recorded on Sept. 24. The next chance for rain, according to forecasters, is Oct. 12 and 13, when there may be a slight possibility of some showers.