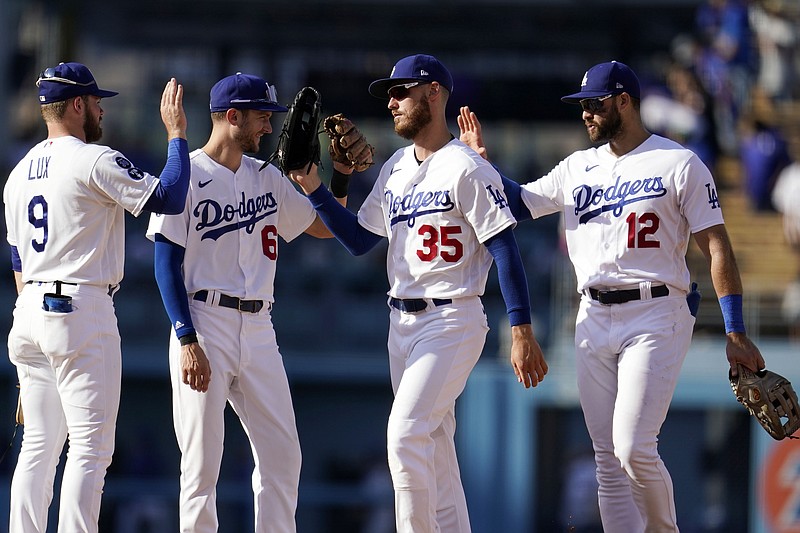 LOS ANGELES -- In a season of gaudy numbers, two sets stand out for the Los Angeles Dodgers.

They finished with their 111th victory to become the National League's winningest team in more than a century, and Freddie Freeman and Trea Turner each totaled 100 RBI.

"This team's in elite company for the regular season," Manager Dave Roberts said after a 6-1 win over the Colorado Rockies on Wednesday. "But we still know the most important part of the season is yet to come."

Clayton Kershaw tuned up for the postseason with nine strikeouts. Turner hit a tiebreaking three-run home run in the fifth inning for the NL West champions, who became the NL's winningest team since the 1906 Chicago Cubs went 116-36.

The Dodgers have already clinched the overall No. 1 seed in the postseason and will have home-field advantage throughout. They open the division series on Oct. 11 against the New York Mets or San Diego.

"The first tournament's over. Now the big tournament starts," Freeman said. "No one cares what your numbers were, how many wins you had. Starting Tuesday, it's first one to 11."

CUBS 15, REDS 3 David Bote drove in a season-high five runs for Chicago as Cincinnati lost 100 games for the first time in four decades.

METS 9, NATIONALS 2 Francisco Lindor and New York geared up for the playoffs by routing Washington, completing a fantastic regular season with the second-most wins in franchise history. Jeff McNeil won the major league batting crown without taking a plate appearance, and New York (101-61) finished with the same record as Atlanta atop the NL East.

ATHLETICS 3, ANGELS 2 Stephen Vogt homered in the final at-bat of his career and scored the first run on a sacrifice fly after Shohei Ohtani pitched no-hit ball into the fifth, and Oakland beat Los Angeles. Ohtani (15-9) finished with a 2.33 ERA and 219 strikeouts in 166 innings, and he hit .273 with 34 home runs and 95 RBI.

MARINERS 5, TIGERS 4 Julio Rodriguez put an exclamation point on his Rookie of the Year candidacy with his 28th home run, Ty France hit a game-ending single and Seattle beat Detroit.

ORIOLES 5-1, BLUE JAYS 4-5 Otto Lopez hit a tiebreaking two-run single in the seventh inning, and Toronto beat Baltimore to split a doubleheader. Terrin Vavra hit a three-run home run in the bottom of the eighth to lift the Orioles in the opener.

RANGERS 4, YANKEES 2 Aaron Judge was out of the lineup a day after hitting his American League record 62nd home run, and New York lost its regular-season finale to Texas.