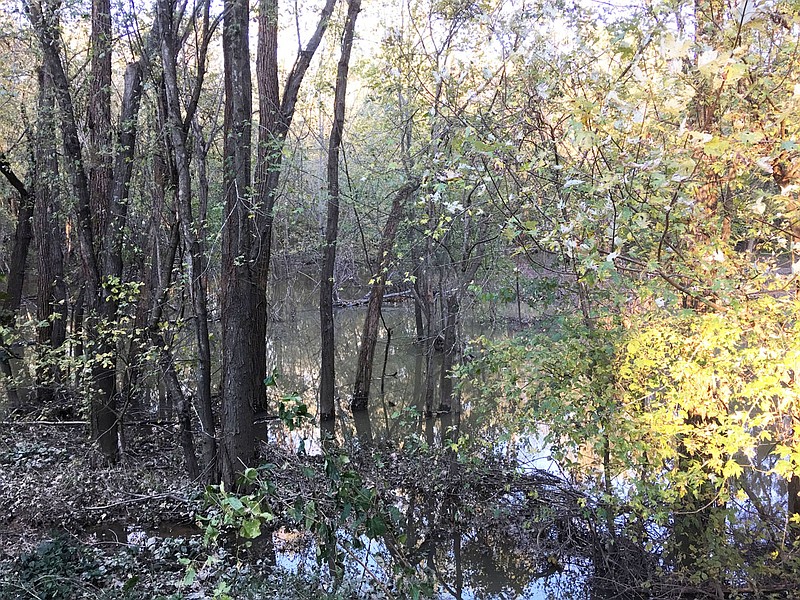 NWA Democrat-Gazette/MIKE JONES A portion of the former Lake Frances near Watts, Okla., is shown overgrown by trees. Lake Frances was essentially depleted in 1990 when the lake's dam was severely damaged, according to a 2017 report in the Siloam Springs Herald-Leader. The 150-foot-wide dam and spillway was constructed in 1931, said Don Clark, community development director Siloam Springs.

SILOAM SPRINGS -- The Northwest Arkansas Land Trust announced Wednesday it has bought about 830 acres of the Lake Frances property near Siloam Springs, according to a news release.

The trust will manage the property, now known as the Lake Frances Preserve, for wildlife habitat, water quality and future public access.

The property was purchased from the descendants of Frances Sloan Thomas, for whom the lake was named, and is the largest tract purchased by the land trust, according to the release.

The preserve lies on the Arkansas/Oklahoma border east of the Illinois River and the 70-acre Lake Frances. The acquisition was made possible through a grant from the Walton Family Foundation, the release stated.

It's one of the largest tracts of contiguous forest in western Benton County and is considered one of the most significant pine/oak woodlands in Northwest Arkansas. There is also a large post oak savanna of regional conservation significance along Lake Frances Gate Road, according to the release.

"Permanently protecting the Lake Frances property ensures a piece of Benton County's natural heritage is protected forever. The shortleaf pine stands and oak savanna are unique in our region and help tell the story of what it was like here nearly 200 years ago," said Marson Nance, land trust director of Land Stewardship and Research. "We've already found unique plants on the property, but have barely scratched the surface in documenting the land's biodiversity."

Lake Frances Preserve has over 7 miles of mapped streams, much of which consists of seasonal and ephemeral streams, which support an abundance of plants and wildlife. Permanent protection of the streams and habitats will help protect water quality in the Illinois River, according to the release.

"We're grateful and excited to showcase another example of a strong conservation partnership to save land in Northwest Arkansas," said Pam Nelson, the trust's director of land protection. "The Illinois River Watershed has been a priority for us since the Land Trust was founded."

The land trust has permanently protected 6,000 acres in Northwest Arkansas, including 1,300 acres in Benton County and 1,700 acres in the Illinois River Watershed.