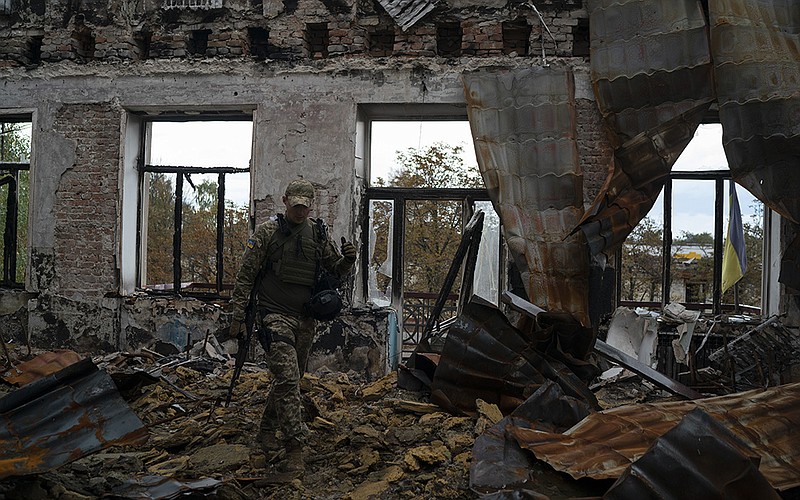 A Ukrainian soldier walks through a heavily damaged school Wednesday in the recaptured town of Lyman in the Donetsk region of eastern Ukraine. More photos at arkansasonline.com/ukrainemonth8/. (AP/Leo Correa)

President Vladimir Putin signed more than 400 pages of legislation annexing four Ukrainian regions, the Kremlin said Wednesday, forging ahead with a parallel reality in which Russia pretends to exercise sovereignty over thousands of square miles of territory that its military does not actually control.

The Kremlin also published a decree from Putin on Wednesday saying that he was nationalizing the Zaporizhzhia nuclear power plant, even as Russia remained locked in a contest with Ukraine over management of the facility.

Russia's economy ministry sought to attach real-world benefits to a largely illusory claim, forecasting that the annexation would raise Russia's production of metallurgy and sunflowers by 20% each, while coal production would increase by 6%.

The state news agency RIA Novosti released a map purporting to show Russia's new territory, adding in fine print that part of it was "under the control of the Ukrainian Armed Forces."

Russian state television trumpeted the signing on Wednesday as the day's biggest news story, while playing down or ignoring the fact that Russian forces are in retreat in multiple parts of the front line.

"The only currency unit starting Jan. 1, 2023, will be the ruble, and the territorial organs of the federal authorities will be created by June 1," intoned the anchor on the noon news on Channel 1.

Four laws spelling out the annexation process -- one for each region, each numbering more than 100 pages -- were published on a government website on Wednesday, with a Kremlin stamp on the last page, dated Oct. 4, standing in for Putin's signature. It was an example of how Putin has long tried to legitimize his actions -- however illegal -- with a sheen of legality bestowed by Russia's rubber-stamp institutions.

Later, in a televised videoconference celebrating Teachers' Day, Putin pointedly congratulated the teachers "of all the 89 regions of Russia," a number that includes the newly annexed territories.

The Kremlin has declared that it will fight to capture all of Ukraine's Donetsk and Luhansk regions -- Ukraine still holds several Donetsk cities -- but it has been more vague about its goals in the other two regions it is attempting to annex, Zaporizhzhia and Kherson. That has sown confusion about what new borders Russia is claiming with its illegal annexation.

While Putin announced the planned annexation Friday in a bombastic and angry speech at the Kremlin, followed by a signing ceremony, there was no further fanfare involving the president this week.

But even the borders of the annexed territory -- an annexation that has been endorsed by only North Korea -- remained in flux on Wednesday as Ukrainian troops continued their counteroffensive in their country's south and east. Peskov bristled when asked whether the annexation was contradicted by the Russian military's retreats.

"There's no contradiction here," Peskov said. "They will be with Russia forever. They will be returned."

Shortly after Putin signed the annexation legislation, the head of Ukrainian President Volodymyr Zelenskyy's office, Andriy Yermak, wrote on his Telegram channel that "the worthless decisions of the terrorist country are not worth the paper they are signed on."

"A collective insane asylum can continue to live in a fictional world," Yermak added.

Zelenskyy responded to the annexation by announcing Ukraine's fast-track application to join NATO. In a decree released Tuesday, he also ruled out negotiations with Russia, declaring that Putin's actions made talking to the Russian leader impossible.

In his nightly address, Zelenskyy switched to Russian to tell the Kremlin that it has already lost because it still has to explain to Russian society why the war and the mobilization are necessary.

"And more and more citizens of Russia are realizing that they must die simply because one person does not want to end the war," Zelenskyy said.

Serhiy Bolvinov, who heads the investigative department of the national police in the region, said authorities are investigating an alleged Russian torture chamber in the village of Pisky-Radkivski.

He posted an image of a box of what appeared to be precious metal teeth and dentures presumably extracted from those held at the site. The authenticity of the photo could not be confirmed.

Andriy Kostin told The Associated Press on the sidelines of a security conference in Warsaw that he had just been notified of four bodies found with signs of possible torture. He said they were believed to be civilians but an investigation was still needed.

During his public speech, Kostin said officials found the bodies of 24 civilians, including 13 children and one pregnant woman, who had been killed in six cars near Kupiansk. It was not clear when the discovery was made.

Russia said Wednesday it would supervise operations at the Zaporizhzhia plant, while the head of Ukraine's state nuclear energy company said that he was taking charge.

In a statement, Rafael Mariano Grossi, director general of the International Atomic Energy Agency, said he would engage in consultations with "the relevant authorities" after reports of Russia's plans.

Separately Wednesday, the energy agency said that its experts at the plant had learned from Ukrainian operating staff members there that it "intended to restart one of its six reactors, which are currently all in cold shutdown."

"It will take some time to complete all preparations, including those related to necessary systems and equipment, before reactor operations can resume," the energy agency said.

The announcement Wednesday by Deputy Foreign Minister Sergei Vershinin about Russia's intention to nationalize the plant flowed from the annexation of Zaporizhzhia province in the south of the country and three others.

The Kremlin said all infrastructure within its new territory, including the plant, is now Russian. Ukraine's state energy company, Energoatom, said the decree nationalizing the plant had no practical significance, public radio reported.

"The Zaporizhzhia nuclear plant is now on the territory of the Russian Federation and, accordingly, should be operated under the supervision of our relevant agencies," Vershinin told Russian state news agency RIA Novosti, according to Reuters.

Russian forces seized the plant -- the largest in Europe -- in March, and since then it has continued to be operated by Ukrainian engineers and workers, though often at gunpoint. Several workers have been detained and interrogated, and at least one has been killed.

Fighting nearby has raised international concern about the risk of a nuclear accident. Shelling in recent months has caused the plant to be disconnected at times from Ukraine's power grid, which Ukraine's energy minister has said puts critical cooling systems at risk of relying solely on emergency backup power.

In a further sign of instability, the plant's director general, Ihor Murashov, was abducted Friday and detained by Russian forces before being released Monday. The International Atomic Energy Agency, which has stationed two staff members at the plant since September, said Murashov, who is responsible for nuclear and radiation safety, would not be returning to his post.

"The IAEA understands that Mr. Murashov is now with his family in territory controlled by Ukraine," the agency said in a statement, adding that it did not know who would replace him.

On Wednesday, Petro Kotin, head of Ukraine's state nuclear energy company, Energoatom, said he was taking charge of the plant. In a video message posted on the Telegram social media app, he urged workers there not to sign any documents with its Russian occupiers.

"All further decisions regarding the operation of the station will be made directly at the central office of Energoatom," Kotin said. "We will continue to work under Ukrainian law, within the Ukrainian energy system."

As a practical matter, it was not clear how Kotin's policy could be implemented unless Ukrainian forces recapture the plant, which is on the east bank of the Dnieper River. Russian forces still occupy the facility.

On the battlefield, Russia and Ukraine gave conflicting assessments of a Ukrainian counter-offensive in the Russian-occupied southern Kherson region. A Moscow-installed regional official insisted that Ukrainian advances had been halted.

"As of this morning ... there are no movements" by Kyiv's forces, Kirill Stremousov said Wednesday in comments to state-run Russian news agency RIA Novosti.

However, the Ukrainian military said the Ukrainian flag had been raised above seven Kherson region villages previously occupied by the Russians. The closest of the liberated villages to the city of Kherson is Davydiv Brid, some 60 miles away.

The deputy head of the Ukrainian regional government, Yurii Sobolevskyi, said military hospitals were full of wounded Russian soldiers and that Russian military medics lacked supplies. Once they are stabilized, Russian soldiers were getting sent to Crimea, which Russia annexed from Ukraine in 2014.

"Not everyone arrives," Sobolevskyi wrote.

Diplomats struck the deal in Brussels that also includes curbs on EU exports of aircraft components to Russia and limits on steel imports from the country, according to an official statement from the Czech rotating EU presidency.

The 27-nation bloc will impose a ban on transporting Russian oil by sea to other countries above the price cap, which the Group of Seven wealthy democracies want in place by Dec. 5, when an EU embargo on most Russian oil takes effect. A specific price for the future cap has yet to be defined.

A deal on the price cap was not easy to reach because several EU countries were worried it would damage their shipping industries. More details about the sanctions will be published as soon as today.

"We have moved quickly and decisively," von der Leyen said as she welcomed the deal. "We will never accept Putin's sham referenda nor any kind of annexation in Ukraine. We are determined to continue making the Kremlin pay."

The new sanctions also include an "extended import ban" on goods such as steel products, wood pulp, paper, machinery and appliances, chemicals, plastic and cigarettes, the Czech presidency said.

A ban on providing IT, engineering and legal services to Russian entities will also take effect.

Information for this article was contributed by Anton Troianovski, Erin Mendell and Matthew Mpoke Bigg of The New York Times and by Adam Schreck, Hanna Arhirova, Samuel Petrequin and Angela Charlton of The Associated Press. 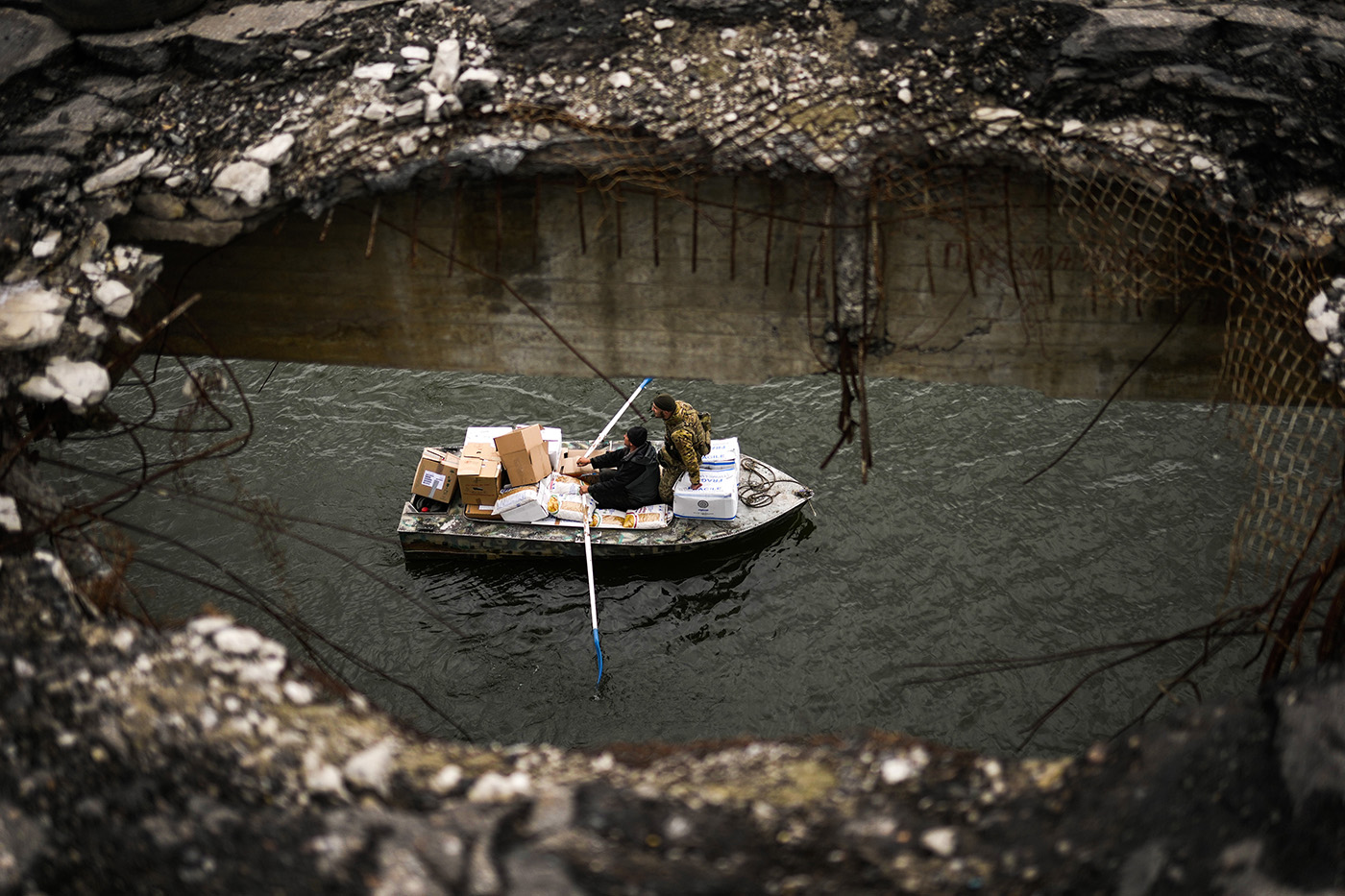 Yuri Shapovalov rows a boat full of goods with a Ukrainian soldier aboard Wednesday as they cross the Siverskyi-Donets river under a destroyed bridge in Staryi-Saltiv, Ukraine. Shapovalov helps locals daily to cross the river. (AP/Francisco Seco) 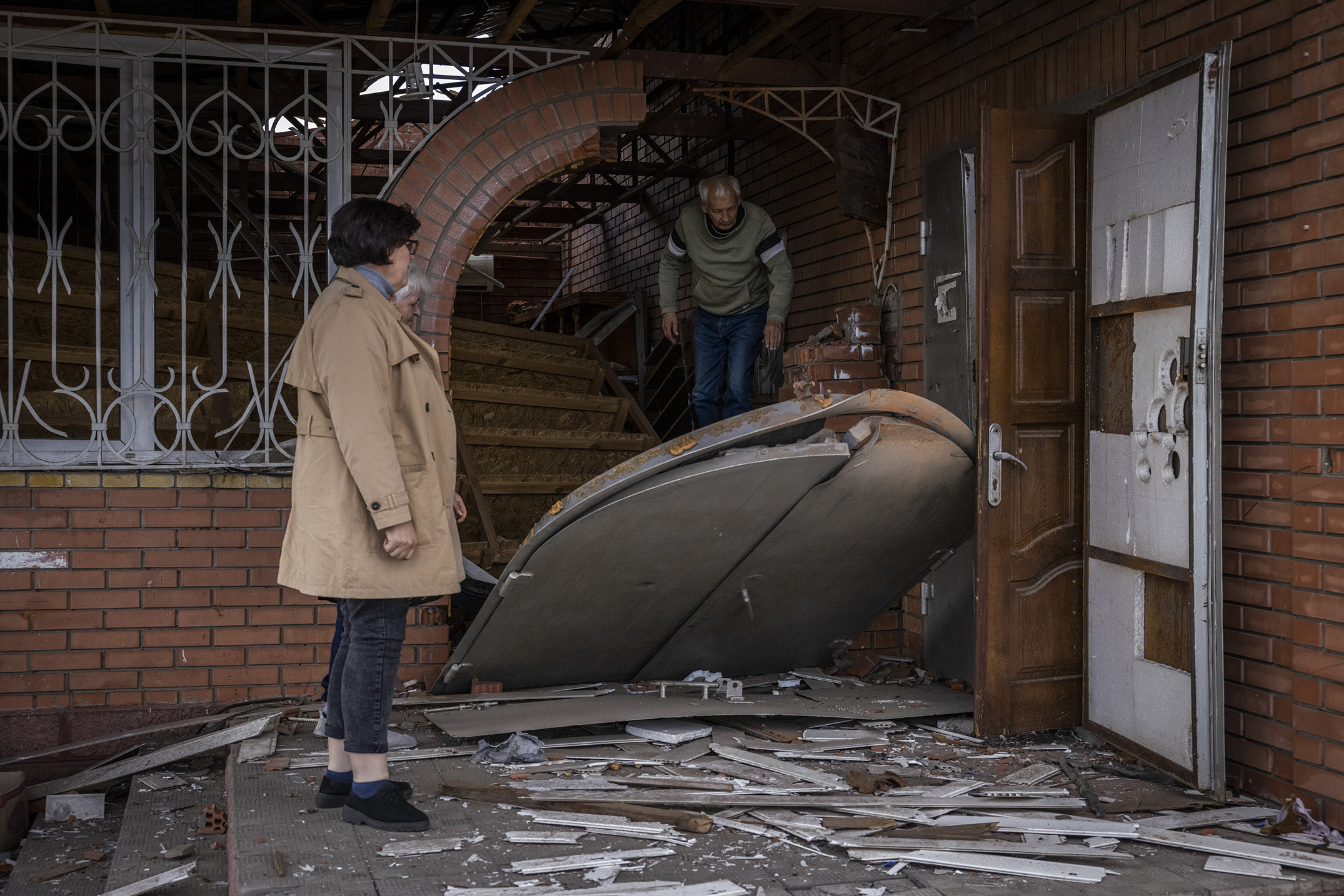 Residents of the recently recaptured village of Yatskivka in eastern Ukraine inspect the damage at a family store Wednesday. (The New York Times/Ivor Prickett)