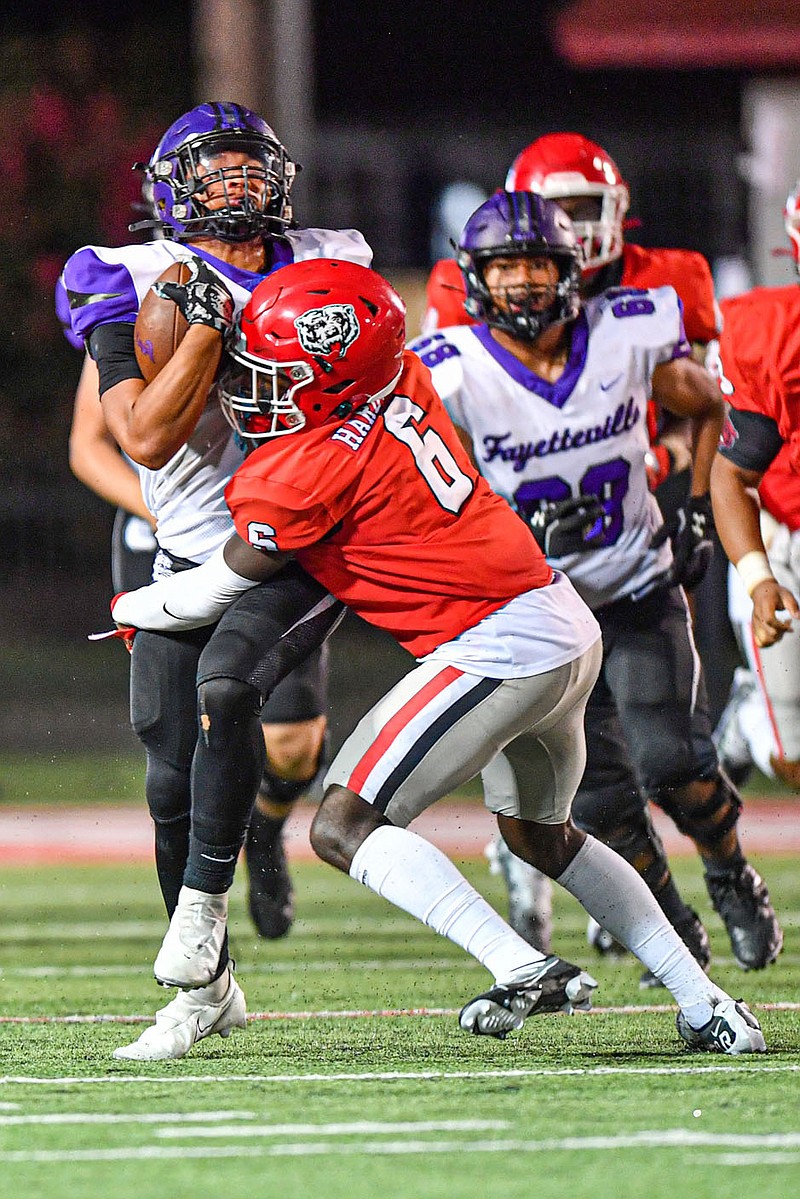 Fort Smith Northside won one and lost one on the road to open 7A-Central play.

"We were pleased offensively and defensively," Northside coach Felix Curry said. "We have some work to do on special teams. We're still feeling out some guys to see what they can and can't do but Coach Solley and the defensive guys have some up with a system I think our kids can operate under."

The game was tied at 7-7 before Northside scored the game's final eight touchdowns.

Senior defensive back Josh Hardwick recovered a fumble and intercepted a pass.

KyVeon Perkins intercepted a pass and recovered two fumbles, including one in the end zone for a touchdown.

"I was just supposed to guard the flat area and wheel route, but they came to block me and I did my blocking part," Perkins said. "Then I saw the ball and got after it."

"Pum has been unbelievable," Curry said. "It's hard to believe that he's played quarterback just one year, and this is it."

"We told our guys don't let their record fool you, they're a great football team and athletic," Curry said. "They have great schemes and great concepts. They're well coached, and it's going to be a tough game."

Northside has played Jonesboro just four times in history, and the last time was in 1964.

The Bulldogs are the recipient of the open week this Friday in the nine-team 6A-West.

Greenwood remained undefeated in the conference, winning its fourth conference game of the season with a 49-21 win at Greenbrier.

The win improved Greenwood to 17-0 against Greenbrier.

The game was tied at 21-21 before Greenwood scored before the half to take a 28-21 lead and then pitched another second-half shutout while scoring three times in the third quarter for the win.

Senior quarterback Hunter Houston completed 38-of-46 passes for 344 yards and a touchdown. His outing bumped his season completion perfect to 78.8 while also lifting over the 5,000-yard plateau for his career in passing yards with 5,242 yards.

"He does a great job of spreading the ball around," Greenwood coach Chris Young said. "He takes what the defense give him. There's a lot of times that he's hitting his second, third or fourth reads. Hunter's got a ton of experience. He started some games as a sophomore and started all year in our championship run last year so he's played a lot of football for us."

Grant Karnes snared a 51-yard touchdown pass on Friday and had 13 catches for 149 yards.

"We've got more than four," Young said. "We've got some young guys that are getting better every week in practice. Not only are they helping us on Friday night but they're helping us on defense Monday through Thursday."

Greenwood did punt on Friday, the first punt in conference play.

After the open week, Greenwood hosts Lake Hamilton, which is also undefeated in conference play and plays Greenbrier on Friday.

The Pointers will be perhaps the healthiest they've been this season when they travel to Russellville on Friday.

"We are short on bodies and we're trying to get to full strength," Van Buren coach Moe Henry said. "We still have everything ahead of us for a possibility and that is to situate ourselves for extend our regular season. That's still ahead of us. If it does, you never know, whoever it is. That's our mindset."

Van Buren dropped a 60-21 decision to undefeated Lake Hamilton on Friday after forcing a 14-14 tie early in the second quarter.

A high point of the game for Van Buren, though, was senior receiver Malachi Henry catching a touchdown pass from Bryce Perkins in the first quarter as Henry set the school record for career touchdown receptions with 25.

"Some of it goes to the style of football that's been played here, and that's not to take away from the guys that have been here playing receiver," Henry said. "There has been a lot of games that he hasn't played leading up to this season."

Henry caught nine touchdown passes as a sophomore and 14 last year but that was without Perkins as the team's quarterback after he suffered an injury in the first quarter against Russellville in the fifth game of the season.

Now, the goal is to play a lot more games for Henry and the Pointers to add to the record.

"We've got games left this season and opportunities for him to add to it," Henry said. "Since he's been back that's what we've seen and teams are going to continue to double him and bracket him."

Receiver Trenton Cooley and running back Cameron Keller will be available for the game against Russellville. Running back Hudson Cheatham suffered a broken leg against Lake Hamilton and is out for the season.

The Mavericks continue the early-season gauntlet through the 7A-West.

Fayetteville will host homecoming festivities and game time has been pushed back to 7:30 p.m. The game also will be held at Reynolds Razorback Stadium, and parking is not allowed on campus until 5 p.m. Entry to the game will only be through gate 14.

Rowland served as the athletic director of Fort Smith Public Schools from 1991-2016. He was also Southside's head football coach from 1970-81. Southside's football stadium is named in Rowland's honor.

Mountainburg emerged from a brutal three-game stretch with a resounding win on Friday night.

Mountainburg scored all of its points in the first half and emptied the bench in a 38-0 win over Decatur.

The Dragons lost to Class 3A Cedarville and Yellville-Summit, managing just two touchdowns combined, in conference play and then traveled to preseason 2A-1 favorite Bigelow to open conference play.

"We looked better than we have the last few weeks," Mountainburg coach Zach Dean. "The caliber of the team wasn't what it had been, either, but we played pretty well. The morale was down a little bit after getting thumped the last few weeks."

Blake Polly forced a fumble and had a fumble recovery, and Kenyon Johnson intercepted a pass.

Offensively, the Dragons ran for 198 yards and two touchdowns, passed for 92 yards and two scores, and Zac Walker returned a punt for a score.

"This game really helped especially the morale of the team," Dean said. "We came out of it feeling pretty good."

"We saw a matchup we liked and hit the 70-yard pass early," Dean said. "That really got us going, and we didn't really look back from that. We also got some good stops on defense. We executed pretty well in the first half."

"That was good especially what we had endured the last three weeks," Dean said.

Mountainburg travels to Magazine on Friday.

Levi Wright preserved Westside's first win of the season with a tackle on the two-point try by Magazine.

"We'll take it," Westside coach Jeff Stewart said. "We tried to give it away. We were up by 16 with 3:40 left and I think our kids thought it was time to start celebrating. We called timeout and tried to get them to calm down. It didn't seem to have any effect on them. Magazine sure didn't have any die to them."

Westside picked off four passes in the game, including one by Kyle Wahn that he returned for a touchdown for a 30-14 lead in the fourth quarter. Wahn also caught two touchdown passes from Cooper Hilton, who also ran for a score and threw for 174 yards.

Miles Lingar also had 11 tackles to lead the defense.

Magazine scored on its final two drives on touchdown passes from Nate Smith, including a 19-yard scoring pass from Smith to Elijah Ward before the two-point stop by Westside.

"It was a nightmare on how to end a game," Stewart said. "I think it was the healthiest we've been in weeks. We've had between 15 and 16 each game, it's been a battle of attrition that's gone against us.

Westside recovered the on-side kick and took two knees to run out the clock.

Magazine led, 7-0, at the half and 14-8 after three quarters before Westside scored on its first two possessions of the fourth quarter and added Wahn's defensive score.

"It was a heck of a game," Stewart said. "The breaks went out way. The game could have gone either way very easily."

Westside is open this week and hosts Conway Christian on Oct. 14 for homecoming.