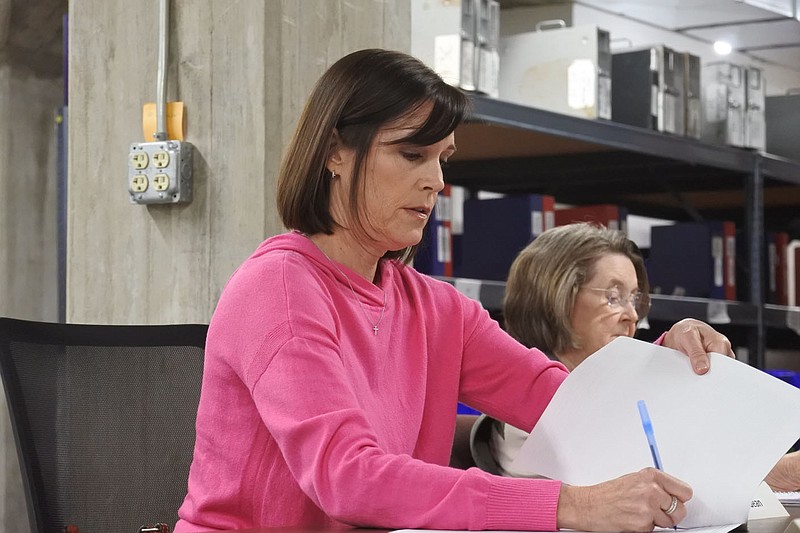 Cara Gean, chairman of the Sebastian County Election Commission, signs a notice of election during the commission's meeting Wednesday. The commission voted to elect Gean as its new chairman at the same meeting. (NWA Democrat-Gazette/Thomas Saccente)

Gean, a Republican, previously served as the commission's vice chairwoman. She replaced fellow Republican Jason Vineyard. The Sebastian County Republican Committee removed Vineyard from the commission shortly after the County Clerk's Office canceled his voter registration Sept. 12 due to a past felony conviction.

Gean, 55, declined a request for an interview after the meeting.

Larry Bishop, Republican Committee chairman, has said the body selected Randy McFadden, 63, of Greenwood on Sept. 15 to fill Vineyard's vacancy. McFadden was sworn in Sept. 16, joining Gean and Democrat Lee Webb on the commission, according to the County Clerk's Office.

The commission signed notices of election Wednesday as well. These outline what all will be on ballots in the county for the Nov. 8 general election and when and where people can go to take part in early and absentee voting. It also provided the locations of the 32 vote centers at which voters can cast their ballots on Election Day.

County Election Coordinator Meghan Hassler said the notices will be posted at every vote center and the courthouses in both county seats, Fort Smith and Greenwood.

The commission capped off its meeting by approving a list of workers that will handle the upcoming election and granting the county permission to hire additional staff if needed. Hassler said the list consists of 205 election workers. They will be paid minimum wage for the time they work, on top of a stipend for the training they will receive.