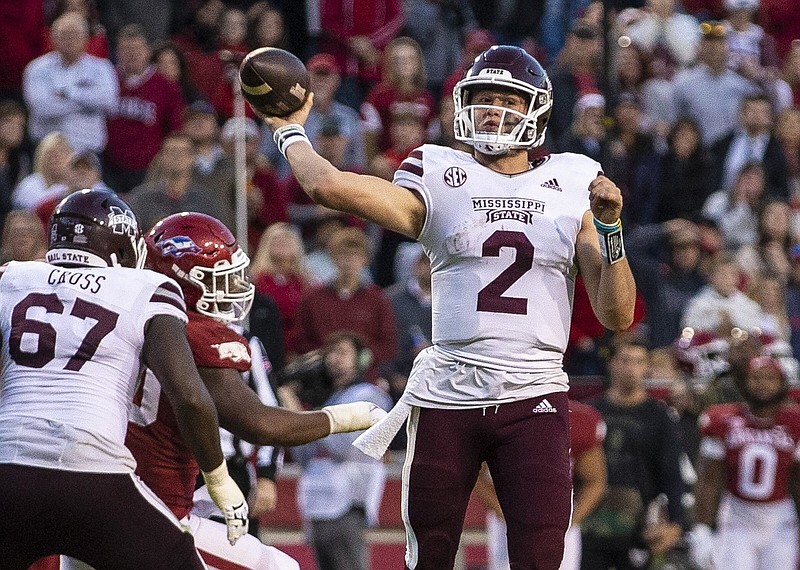 Mississippi State quarterback Will Rogers (right) presents a challenge for the Arkansas defense Saturday in Starkville, Miss. Rogers has passed for 1,715 yards and 19 touchdowns this season for the No. 23 Bulldogs. The Razorbacks have won the past two meetings against the Bulldogs, including a 31-28 victory last year in Fayetteville. (Special to the NWA Democrat-Gazette/David Beach)

FAYETTEVILLE -- In two games against the Mike Leach "Air Raid" offense, the University of Arkansas defense under coordinator Barry Odom has held up pretty well.

The Razorbacks, playing largely in a "Drop 8" zone scheme that forces quarterbacks to pick their way precisely down the field, gave up lots of passing yards but not so many points in notching 21-14 and 31-28 wins over ranked Bulldog teams.

The Arkansas defense allowed an average of 443 total yards, 365 passing yards and 21 points in those two games.

Quarterback Will Rogers will get his second crack at the Hogs' defensive scheme Saturday at 11 a.m. Central in Starkville, Miss.

While Arkansas has run a lot more man coverage with an array of blitzes this season, leading to 21 sacks, Rogers and the Bulldogs expect more cloud coverage from the Hogs, meaning zone looks on the second and third levels.

Rogers was asked Tuesday if he expected Arkansas to play a "Drop 8" look as Texas A&M did last week.

"One hundred percent," Rogers said. "That's what we're guessing. You have to be prepared for everything. You never know what they're going to throw at you, so we're kind of just preparing for everything."

Arkansas Coach Sam Pittman wasn't tipping his hand when asked if the Razorbacks might employ more of the double cloud coverage that helped them in many games last season.

"We won nine games last year doing it, so it worked," he said. "However, we also got exploited by some teams that could run the football and that are big, like Georgia, some of those guys.

"So certainly we'll look at that this week. We played a lot of it last year as well. I'm sure they'll be ready for that if we choose to go there. I still think that we have to be multiple, but certainly we have to understand we've got to keep people in front of us and get them on the ground. We've got to get better at that, so zone coverage at times can certainly help you with that."

Arkansas linebacker Bumper Pool, who has 30 tackles against Mississippi State the past two years, said it helps to know the Bulldogs' methods of attack.

"They run the same exact offense that Leach has done for 20 years or 20-plus years, and they stick to it," he said. "So for us, it's just being able to recognize the routes based off of the formation. They stick to it, so if we can read what they're doing pre-snap, we'll have a lot of success.

"We've just got to make sure we're staying in our zones, not dropping too deep and make sure that we're doing a good job getting our hands on them."

Leach is also familiar with the schemes Odom has concocted to slow his system.

"He's got his package that he's worked for years to refine and put together," Leach said. "There's some changes here or there, I think, to accommodate for the players he's got. I don't think he's going to reinvent something new because he spent well over a decade developing this one."

The Arkansas secondary has been beaten up physically and abused by opposing quarterbacks and receivers much of the season. With safety Jalen Catalon and cornerback LaDarrius Bishop out for the year and various other players slowed by injuries, Arkansas has allowed 289.6 passing yards per game to rank 124th out of the 131 FBS teams.

Missed tackles and loose man coverage behind the Razorbacks' more aggressive blitz packages have been troublesome, so tackling and coverage improvements have been emphasized by Odom and cornerbacks coach Dominique Bowman all week.

"It's been a huge focus," safety Simeon Blair said. "Coach Bowman, Coach Odom, they've done a great job of putting us in situations to tackle that's probably not exactly game-like but in harder positions to tackle [at practice], which helps us when we get in a game and actually tackle.

"And we've been doing a lot of film prep, a lot of film study, getting our minds ready, preparing ourselves for the game to see what we're going to see on the field."

Rogers joins a long list of quarterbacks who have excelled in the Air Raid.

He has completed 171 of 234 passes for 1,715 yards to rank third nationally with 343 yards per game. Rogers' 19 touchdown passes are tied for the FBS lead with North Carolina's Drake Maye and his 73.1% completion rate is seventh.

"They have a lot of offensive talent and it starts with Will Rogers," Pittman said. "He's fantastic. The guy is fantastic. If you check it, and you don't disguise your coverages and he knows exactly what it is, then you've got problems because they've got great receivers who can catch the ball.

"And at any point they can turn around and hand it off. They're running the ball as well as I think they've ever run it the last three years."

Rogers said he is aware of the Razorbacks' big sack count of 21, which ranks second in the country, and the work of transfer linebacker Drew Sanders and others.

"He's a really big, long guy who can fly around and make a lot of tackles," Rogers said. "We're going to have to be on our game in pass protection and getting the ball out on time and things like that."