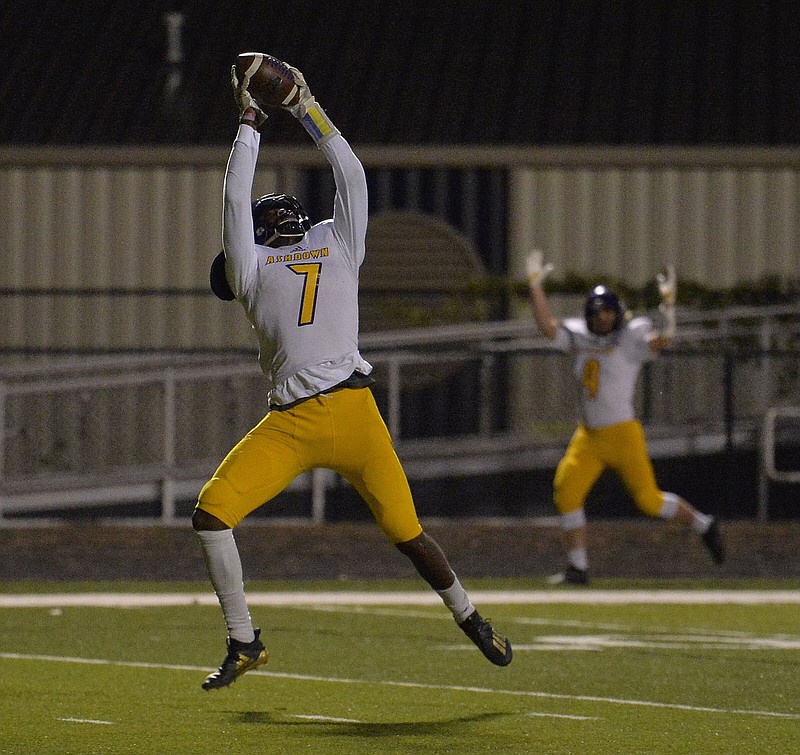 Ashdown tight end Shamar Easter (7) is consistently ranked among the top 10 or so at his position among seniors nationally. The 247Sports composite has him as a 4-star recruit and the 123rd player in the 2023 class. (Democrat-Gazette file photo)

Ashdown Coach Matt Richardson isn't looking beyond tonight, no matter how high he thinks his team's ceiling is.

Ashdown, ranked No. 3 in 4A, and No. 4 Malvern each provide one of classification's best units.

Malvern's offense, led by quarterback Cedric Simmons, running back Jalen Dupree and left tackle Vinny Winters, is averaging 45.6 points per game -- second only to Gentry's 49.4 among 4A teams.

Ashdown brings the top defense Class 4A, allowing 8.8 points per game -- the fourth-best average in the state.

The Panthers spent last week's bye focusing internally to root out any lingering problems that could be highlighted against Malvern.

"I told my kids, 'They're going to make big plays. If you think you're going to stop all their Division I players from making big plays, you're crazy,' " Richardson said. "My concern is nothing they do, just take care of [ourselves]. That's what I'm telling my kids, 'Go out and take care of you. Don't let Ashdown beat Ashdown.'

"He's a really good player," Richardson said. "He's leading us in tackles, he makes all the checks and does everything for us."

Richardson is adamant his defense is not the only side of the ball his team excels, and the Panthers' recent play suggests he's right.

Ashdown has averaged 42 points per game over its past four outings and two of those games were without 247Sports' No. 1 senior in the state, who is set to return tonight.

Tight end Shamar Easter is consistently ranked among the top 10 or so at his position among seniors nationally. The 247Sports composite has him as a 4-star recruit and the 123rd player in the 2023 class. Ashdown has won its past two games despite Easter being limited to a handful of snaps, but the University of Arkansas commit could be the difference-maker against Malvern.

"To have that guy back, you know, he's a big force and he can change the game really quick and be better than anybody on the field when he gets the ball in his hands," Richardson said. "It's going to be nice to have him back."

With Easter back and a defense among the state's elite, Ashdown has all the makings of a team ready to win the school's first state title in football. This isn't the first team Richardson, in his 13th season at Ashdown, has thought of as a title challenger. But despite that, he's trying to remain focused on the task at hand.

"We're worried about this week," He said. "They're a good group, I can tell you that. They're probably the best total group I've ever had. ... We got a shot to be really special, but we got to take it one game at a time."