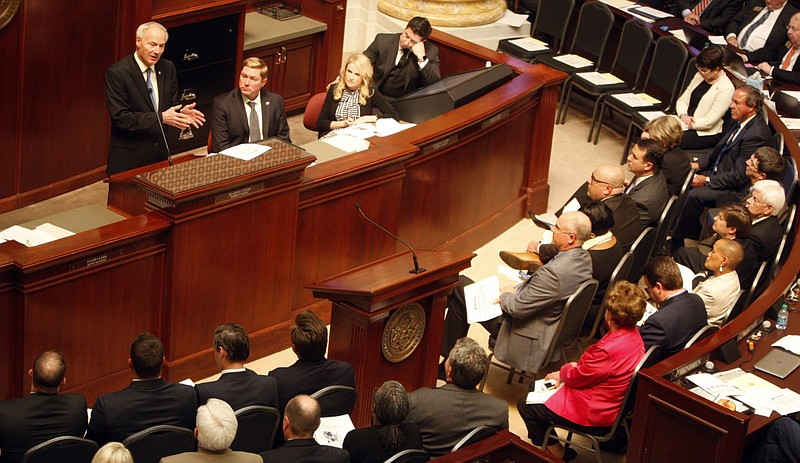 Gov. Asa Hutchinson addresses lawmakers during a special session of the Legislature in Little Rock in this May 1, 2017 file photo. (Arkansas Democrat-Gazette file photo)

Led by Arkansas State Chamber of Commerce and Arkansas Farm Bureau officials, a committee has been formed to campaign against the proposed constitutional amendment that would allow the Legislature to call itself into special session.

The proposed amendment is Issue 1 on the Nov. 8 general election ballot. In the 2021 regular session, the Legislature voted to refer the ballot proposal by Sen. Breanne Davis, R-Russellville, to voters.

Randy Zook, president and CEO of the Arkansas State Chamber of Commerce and co-chairman of the Arkansans Against Issue 1 committee, said Thursday in an email the committee hopes to mount "a mid-size figure effort" when asked how much it plans to spend to defeat Issue 1.

Stanley Hill, vice president of public affairs and government relations for the Arkansas Farm Bureau, is the other co-chairman of the committee.

"Our Legislature already meets once every year, plus one or more special sessions called by the governor most years, and that's enough to take care of the business of the people," Zook said in a news release.

"Voters benefit from having a truly representative 'citizen legislature,' and if Issue 1 passes, making it harder for the average Arkansan to serve, we will move even closer to a full-time legislature," Zook said.

Davis, reached by telephone on Thursday afternoon, declined to respond to Zook's remarks.

"It is not about us coming in more often" into session, she said.

During the 2021 regular session, Cavenaugh said the onset of the coronavirus pandemic in 2020 brought up unprecedented issues, and that calling their own special sessions would allow state lawmakers to be more responsive to their constituents.

"For me, it's not a poke in the eye of our current governor," she said at that time, referring to Republican Asa Hutchinson, who has said he doesn't see a need for the amendment.

Issue 1 would permit the General Assembly to convene in an extraordinary session by a joint written proclamation of the speaker of House and the Senate president pro tempore, or by the submission of the signatures of two-thirds of the members of the 35-member Senate and 100-member House of Representatives.

Lawmakers would be required to state the reason for the session. Once that purpose is accomplished the session could be extended by up to 15 days by a two-thirds majority of both chambers.

Cavenaugh said requiring signatures from two-thirds of the the House and Senate "is a pretty high threshold."

Hill said the bottom line is special sessions should be called in rare circumstances and not used as a political tool.

"Since our state's government was reorganized in 1874, only the sitting governor can call for special sessions of the general assembly/legislature and set the agenda for these sessions," he said in a news release. "It is a system that has served our state well for almost 150 years and provides a balance between the executive and legislative branches of our government."

Lawmakers in 36 other states have the power to call themselves into special session, and 17 states require signatures from two-thirds of legislators in both chambers, according to the National Conference of State Legislatures.

The other 13 states besides Arkansas where only the governor can call a special session are Alabama, California, Idaho, Indiana, Kentucky, Michigan, Minnesota, Mississippi, North Dakota, Rhode Island, South Carolina, Texas and Vermont.

The Arkansans Against Issue 1 committee said only five other states -- Connecticut, Delaware, Florida, Illinois and Ohio -- allow the presiding officers of the House and Senate alone to call a special session.

Asked about Issue 1, Republican gubernatorial candidate Sarah Huckabee Sanders said Monday, "I think that our Legislature spends a lot of time in session as it is."

"I think that a full-time Legislature is probably not the best thing for the state of Arkansas right now," Sanders said.

Asked if that means she plans to vote against the proposed constitutional amendment in the Nov. 8 general election, Sanders said, "We'll see."

"I will tell you when I get there," she added.

Two of them, Issues 2 and 3, were referred by the Legislature in the 2021 regular session.

Issue 2, proposed by Rep. David Ray, R-Maumelle, would require approval by 60% of voters, instead of a majority, for the enactment of proposed ballot measures.

Issue 3, proposed by Sen. Jason Rapert, R-Conway, would prohibit the government from burdening a person's freedom of religion unless the government can demonstrate that it furthers a compelling government interest and is the least restrictive means of furthering that interest.

Issue 4 is the Responsible Growth Arkansas committee's proposed constitutional amendment that would legalize recreational marijuana in the state.

It would allow the sale of cannabis to people 21 or older, prohibit advertising and packaging designed to appeal to children, provide regulatory oversight by limiting the number of licensed businesses, and not allow homegrown cannabis.

Issue 4 also would limit the number of cannabis licenses to 20 cultivators and 120 dispensaries statewide, which includes existing medical marijuana licenses.